When even the gods are saying stay home 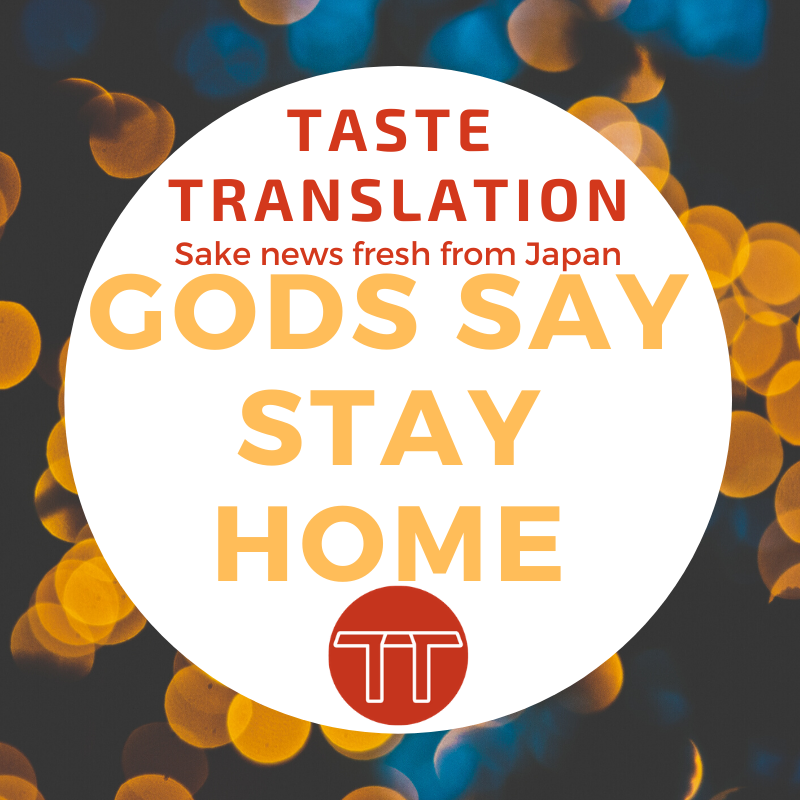 Sankei News and Yahoo Japan News (via Nishitama Keizei News) both feature breweries appealing to the ultimate authority to ask people to stay at home – the gods.

Shiraki Tsunesuke Shōten sake brewery in Gifu Prefecture and Nakaune Saketen sake shop in Kyoto haved teamed up with a limited edition label as the answer to their prayers about falling sales during the coronavirus epidemic.

Their pick for the label? Daruma (Bodhidharma) who is supposed to ward off disease. The sake itself is named Ugokazu jitto Daruma Masamune (動かずじっと 達磨（だるま）正宗, “unmoving and still Daruma Masamune”), a sake-based appeal to drinkers to stay calmly in place.

One of the two people who came up with the idea is Yasuhiro Nakaune (49), owner of the Nakaune Saketen sake shop in the Fushimi area of Kyoto. His sales have halved since February because of the pandemic. While searching around for some way to improve the situation, he ended up talking with one of his suppliers who was experiencing similar problems: Shigeri Shiraki (51), seventh-generation owner of the Shiraki Tsunesuke Shōten brewery in Gifu City.

Shiraki knew about a red Daruma hung up as a protection against evil during an Edo Period smallpox epidemic, and suggested adapting it for the modern coronavirus pandemic.

The brewery’s main label is Daruma Masamune, their trademark has included Daruma for a long time [according to their site, added around 1935 when the company recovered after an earthquake] and they have ties with Hōrinji temple in Kyoto’s Kamigyo Ward – which is affectionately known as Daruma-ji. This made a Daruma drawn with a prayer to ward off disease a natural choice for a limited-edition label. They chose the name to compare the stay home advice to Daruma’s famous feat of meditating facing a wall for nine years, and released the sake in April.

The label also carries five characters symbolising Daruma’s teachings about patience and endurance, inspiration for those stuck indoors. Customers enjoy hearing the story behind the sake, commenting that they’ll keep the bottle for luck and it will help them to enjoy having a drink at home.

The bottles retail for JPY 2,090 (720 ml bottle), with home delivery available, and part of the proceeds go to a coronavirus prevention fund.

Another mythical figure invoked in response to the pandemic is the lesser known Amabie, a yōkai [spirit or monster] that appeared in the Nishitama area, modern-day Kumamoto Prefecture, at the end of the Edo Period.

An Edo period newssheet claims that Amabie rose from the sea, told startled onlookers that they should make a copy of its appearance and show it to people if there was an outbreak of disease, then disappeared beneath the waves again. The newssheet also carried an image of the yōkai, which started appearing on social media in Japan and – um – went viral as people all over the country prayed for the pandemic to end, often creating their own versions in the process.

The Ishikawa Brewery in Kumagawa to the far west of Tokyo is selling a limited-edition Amabie label junmai online. (JPY 1,500 for 720 ml) It provoked a huge reaction on Twitter, and demand was so high that they’ve decided to release another set of bottles.

The illustration is by one of their own staff, and the labels also contain lucky four-character phrases invoking good fortune and good health. A spokesperson for the brewery explained that they hope it will encourage people to enjoy sake at home without being beaten by the pandemic, and that Japan will soon return to the peaceful days when there was no need for images of Amabie.

Amabie seems to represented as a modern, cutified, rainbow-coloured cross between a mermaid and a duck, although there was also a great merman version that I can’t find now.