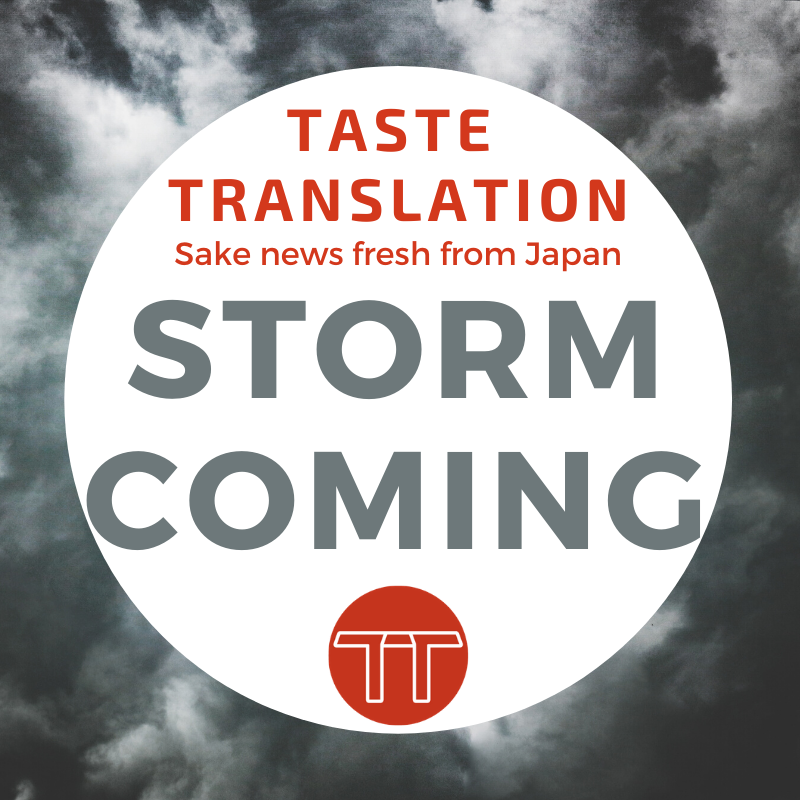 Reporting for the Mainichi Shimbun, Satoru Matono points out that as COVID-19 continues to spread, Yamagata Prefecture is feeling its effects on one of its speciality products – sake.

Labels popular abroad with strong exports are being hit as consumption declines overseas, resulting in a complete lack of orders and boxes of sake stuck in brewery warehouses.

Sake was increasing in popularity abroad alongside Japanese food, but brewers and others in the supply chain have been left bewildered by this new threat.

One email sent to International Wine Challenge sake division winner Dewazakura Shuzō from a US distributor at the end of March lamented that their sales were just 20% of the same period of the previous year, leaving them unable to place new orders.

Government reports indicate that over 350,000 people are infected in the US, an overwhelming number that has resulted in many bars and restaurants closing temporarily. Around 40% of Dewazakura’s exports are thought to go to the US. 300 cases of sake (around 3,700 bottles, or 2,380 litres) wrapped in plastic and labelled for Oakland were piled high in their warehouse, as it’s currently not possible to ship them. The consignment should have gone to Yokohama on 25 March for transport on to the US west coast.

According to the Japan Sake and Shōchū Makers Association (JSS), total exports of sake in 2018 were JPY 22.2 billion, triple the figure in 2008, and exports have been setting new records for the last nine years. The US is the largest export destination both by volume and by value, and Dewazakura’s export manager Naoki Kamota noted sadly that he’s never seen a situation anything like this in over 20 years of exporting.

Another interested party explained that over 90% of Dewazakura’s exports to the US go to bars and restaurants. Few people in the US buy alcohol to drink at home, so the closure of bars and restaurants means they probably have to be ready to wait at least another 1-2 months before shipments can resume.

The COVID-19 crisis dealt also dealt a heavy blow to corporate celebrations for new employees and those moving on [the recruitment/working year usually runs April to March] and hanami [cherry blossom viewing] season. One Yamagata Prefecture wholesaler reported a significant drop in sales to bars and restaurants, down to 65% of what it was last year (as of 26 March).

The Japanese government has a loan system for small to medium enterprises, but the wholesaler confessed painfully that even if they used the system it would be difficult to repay the loan. Sakashi Nakano, head of sales at Dewazakura Shuzō, stated that they hoped to increase individual consumption by releasing planned products, which puts them under pressure to reinvent their sales strategy.

I’m sure there will be more stories like this to come, but it shows just how the COVID-19 pandemic is hitting the sake industry both at home and abroad, coming on the heels of a collapse in demand from China at the end of last year and also the political boycott of Japanese products in South Korea.

On a personal note, I’m off to order some Dewazakura. The Nakanos are a wonderful, incredibly hospitable family and one of the first breweries who allowed me to visit back in 2017 when I became seriously interested in sake. They’ve also made a massive contribution to sake at a prefectural, national and international level, and I hate to see this happening to them and their colleagues at Dewazakura.

As the one and only John Gauntner says, get out there and buy sake. Drink sake. Order sake. Now more than ever, the choices we make today may determine what industries and companies are left standing when this is over. Kanpai.