April was busy for MAME, with not one but two tastings! (They held a fruit tasting earlier in the month.)

This tasting was much more focused than the ones I’d been to previously. One coffee variety from one farm, processed three ways and sent to four roasters. Although Emi and Mathieu had ordered from three of the four, one shipment didn’t arrive in time so they held the tasting with three coffees each from two roasters, Australians Proud Mary and and UK-based Assembly (who list details of the pack on their site, although it’s sold out).  The other roasters were New Zealanders Flight Coffee and Australian neighbours Grace & Taylor (who have some great details of the farm producing the coffee for the sold-out pack).

The first point of interest was the variety, Wush Wush. This heirloom variety fell out of favour as it has low yields and isn’t disease-resistant. Originally from Ethiopia, it was grown on a family farm in Columbia as part of a project to revisit old varieties to see if they would make good speciality coffee. The entire crop came to just 300 kg, which was processed three ways – washed, honey and natural – and sold to four roasters. (Here are some good explanations of washed, honey and natural processing from Perfect Daily Grind -Washed, Natural, Honey: Coffee Processing 101, and from The Roasters Pack – What is: Processing?)

Mathieu and Emi followed their usual procedure of giving the coffees three-digit numbers to disguise their identity and stop people unconsciously ranking them based on external factors, but they did tell us which process was used (with one column of natural, one honey and one washed, and the coffees from each roaster in a row). It would have been helpful to label the columns in writing as well, as it easy to lose track of which was which (honey was in the middle, with washed and natural on each side). 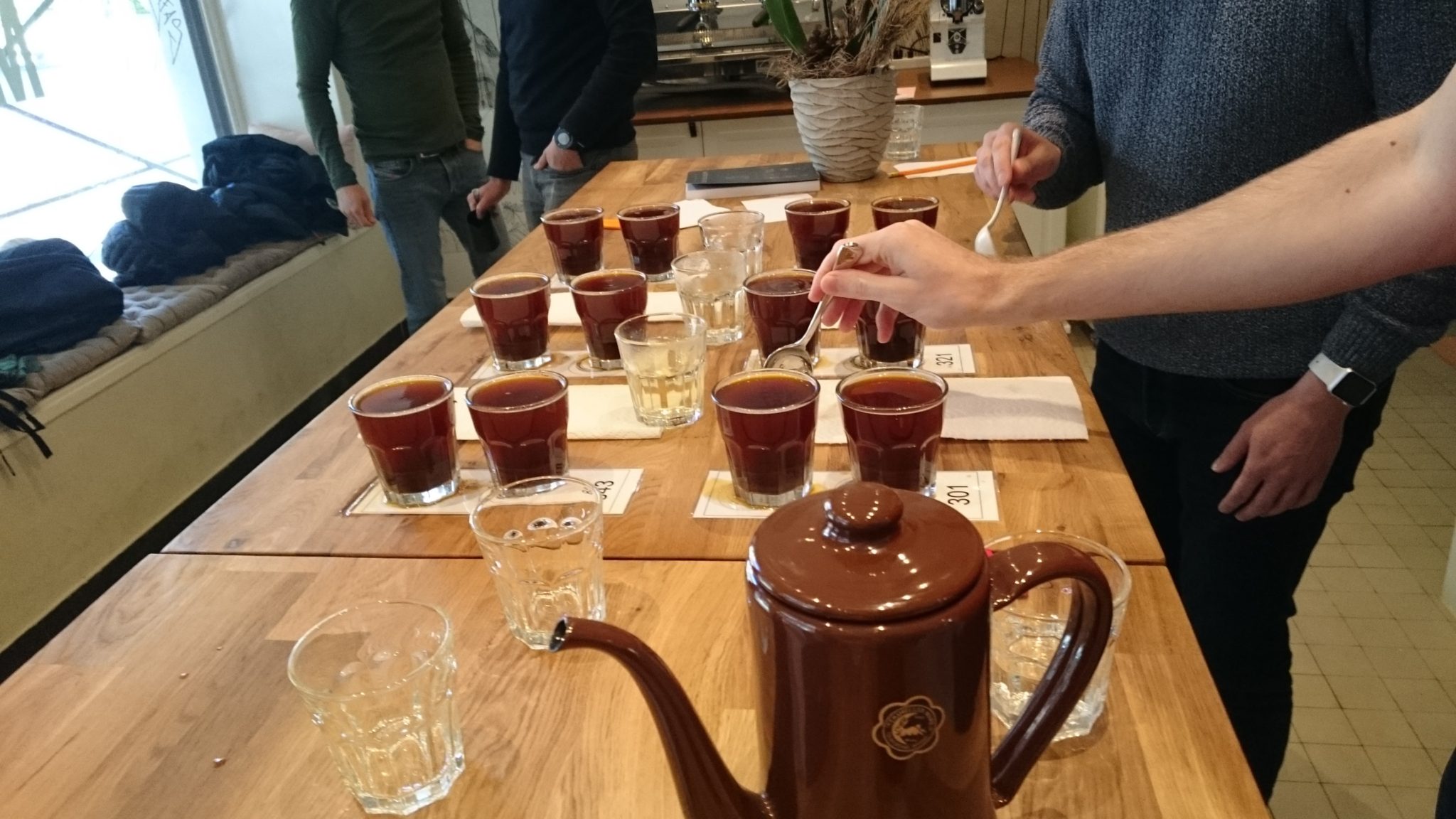 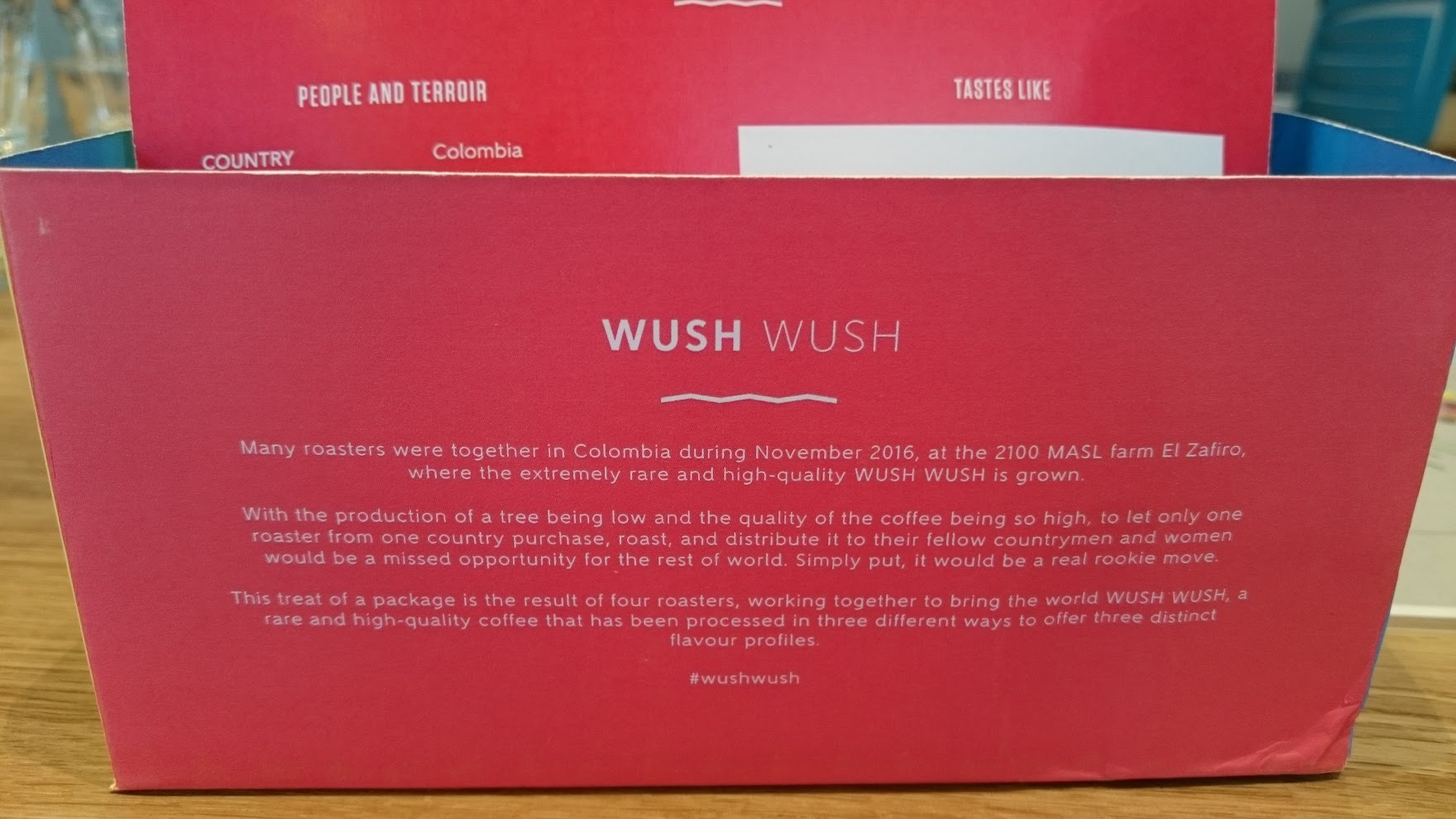 We first smelled the ground coffee, and Mathieu asked us what we noticed about it. I was struck by the intensity of the aroma, which was strongest for the natural process, less so for the honey and washed but still very prominent.

The coffees were then brewed, and Mathieu commented on the good crust that developed – a sign of freshly roasted coffee. The packs had shipped straight after roasting, so they were still fresh even after arriving from Australia. He also complained that the water was too soft – he had noticed before that the Zürich water went soft for a day or two after it snowed, and it had snowed twice that week! His measurements put the water at 85 ppm hardness and pH 6.5.

I tasted the coffees brewed by process without taking notes, trying to taste the differences, then tasted again going around in a circle and working through one roaster washed – honey – natural and the other washed – honey – natural. Although the coffees were prepared as per the standardised SCAA/SCAE protocols, within narrow windows for time, temperature, etc. to enable comparison, my first impression was how intense the flavours were compared to other coffees I’d tasted. As with the aroma, the flavour was strongest in the natural processed coffees, slightly less so in the honey and least so in the washed, but still strong overall. Although I’ve discovered I’m a fan of natural process, I found that the washed let some of the flavours come through more clearly.

The most curious thing for me in this tasting was that a lot of my notes were elements that I found to be negative in other tastings – acidity, roasted/burned notes – but in the Wush Wush they were positives. It was everything I didn’t like in coffee, but in a coffee I liked. There was plenty of coffee to go round, with two glasses of each of the six variations, and not too many people, so I could go back and taste again and compare across processes and roasters, making it a focused, and for a beginner like me, really informative tasting.

After we’d had plenty of time to taste the coffees, Mathieu revealed the roasters: 843/845/876 were from Proud Mary and 301/321/332 were from Assembly. He asked us again what we felt was most distinctive and everyone said the process – except Mathieu and André, another professional taster, who said they thought the roaster made the biggest difference. (Like with the fruit tasting, seeing the difference in opinion between the untrained attendees and the trained baristas was very interesting.) When talking about recognising aromas, André mentioned the Le Nez du Café sensory training kit, but Mathieu had a different set from a Korean manufacturer, Scentone.

Although I though that the Wush Wush coffee was excellent, particularly in how it combined strength with a positive spin on elements I usually don’t enjoy, the professionals weren’t impressed. They both noted that the variety was sweet and not acidic, and relatively delicate, but they didn’t rate it for mouthfeel or complexity. Their conclusion was that it was’t distinctive and therefore was no good for competition.

When the tasting was over, Mathieu decided to use up the packets by playing around with the brewing, such as over-extracting and serving with milk. The attendees stood around chatting, particularly asking questions about processing. Mathieu and André talked about honey processing and how it generated lactic acid, smoothness and a round mouthfeel, to the point where it was described in one competition as like banana milk. They also agreed the coffee had notes of lemongrass (which was accused of being a glass of plain water in the fruit tasting). André talked about how he was unusual in liking bright acidity in coffee, most people prefer less acidity. They also discussed the roasts, speculating that Proud Mary had put more energy in at the beginning, producing more complexity, and Assembly had started off with less energy to allow longer development of the flavours with a more “bakey” result. (André’s technical term for the dry, roasted, peanut-like taste/sensation at the back of the mouth.)

Wush Wush is originally from Ethiopia and like Gesha keeps its characteristics even when transplanted to a new environment. Mathieu wondered if the aim of growing it in Columbia was to add some of the region’s characteristic citrus profile, but if so he wasn’t sure they got it.

André commented that it was hard to get espresso right the first time – it should be coarse but the processing already made it so, and this was Mathieu’s first attempt whereas a barista would normally spend 15 minutes or so to find the right “recipe” for a particular coffee.

Next up was the Proud Mary natural process as a cappucino, which Mathieu pronounced to be “sweet as hell” and a “sweet bomb”. I really couldn’t taste much with all the milk, but maybe it was the lack of other elements that made it blend with the milk for me.

Emi then prepared the three Proud Mary variations as filter:

In another interesting exchange, André approached Emi as she was preparing the filter coffee to say that her technique could be a bit more even – Mathieu interrupted to say that his filter brewing technique was completely consistent, but resulted in a flat, uninteresting coffee. Emi’s wasn’t consistent, sometimes a little under-extracted, sometimes a little over-extracted, but brought out the characteristics of the coffee and produced a better result. (Very wabi-sabi.)

I asked André about Japanese involvement in the world of coffee. He said that the Japanese were at a very high level, and had won many recent competitions. He put this down in part to them taking time off to train – up to six months – whereas most people like himself, Mathieu and Emi had to practice in the evenings and weekends around a full time job.

Although I didn’t remember taking as many notes as I did, I think the smaller number of closely-related coffees (and fewer people, it was the May bank holiday weekend) made this the best tasting session I’ve been to yet. Emi and Mathieu are planning another one in a few weeks, but depending on when they hold it I may be in Cardiff for the Institute of Translation and Interpreting conference, but I’m also there for the Cardiff Coffee Festival!