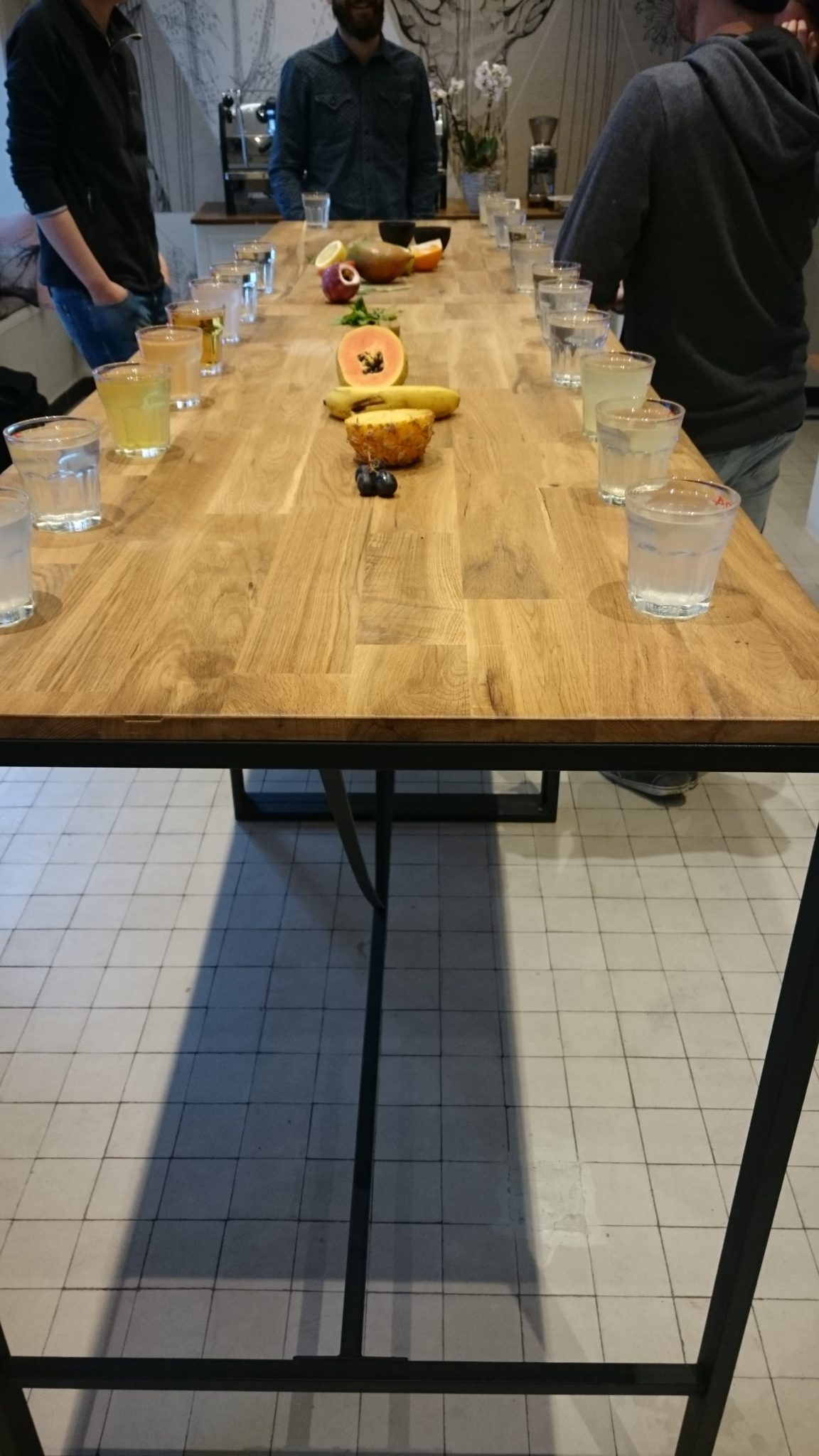 We weren’t organised enough to go anywhere over Easter, so we stayed local, enjoying some long walks with friends and doing a few things around the house. Plus I went to a tasting at MAME and we had a chocolate tasting at home!

Although I’d been to coffee cupping events at MAME before, this time they did something slightly different – a fruit tasting! Emi and Mathieu prepared 29 fruits and herbs and diluted them so that we could experience the flavours that they look for when tasting coffee. They mixed 10 ml of fruit or herb with 150 ml of water, except for strong citrus fruit like lemon and lime where they only added 4 ml of fruit to 150 ml of water (and even that was too strong). They then labelled each glass with a three-digit code and we used spoons to taste each one, writing our notes down on a sheet of paper. Mathieu demonstrating the tasting “slurp” and emphasised that if your mother wouldn’t be embarrassed, you’re not doing it right!

Mathieu and Emi also use the three-digit codes for coffee cuppings to disguise the identity of the coffee and stop people trying to “rank” coffees by numbers or letters instead of concentrating on the taste. (It’s something people unconsciously do to try to evaluate before they have other information. They also hide the packaging as it has a powerful influence on whether people think they like a coffee or not.) In this case as there were so many glasses, some of the numbers were similar and they weren’t in order on the sheet, it was hard to find the right row to write comments in – one number was duplicated on the sheet and one was missing, plus one of numbers was duplicated on the glasses, so there was some confusion. I’ve said to them before that they offer too much choice and I think they were too generous here too! Most of the fruit and herbs were on the table, although some had to be brought out from the kitchen afterwards.

Mathieu did best with only eight wrong. I was in last place with only eight right – I only managed some of the citrus fruit, the herbs, black and green tea, and banana. Other fruit that I was certain I would recognise, like green and red apples and grapes, berries and dried fruit, were so different in dilution that I mistook them for something else. (There were accusations that one of the glasses had plain water, but it turned out to be a dilution of lemongrass.)

It goes some way towards explaining why as an amateur I pick up different tastes in food and drink – I’m looking for a layman’s idea of a certain taste, not the diluted version that a professional taster looks for. But it also raises the question of education and giving the right information to the right audience. As an amateur I don’t pick up the same flavours, so is it useful to list them on packets aimed at the general public rather than trained baristas? That’s one to add to my list of questions when translating and writing!