A day in the life of a sake educator 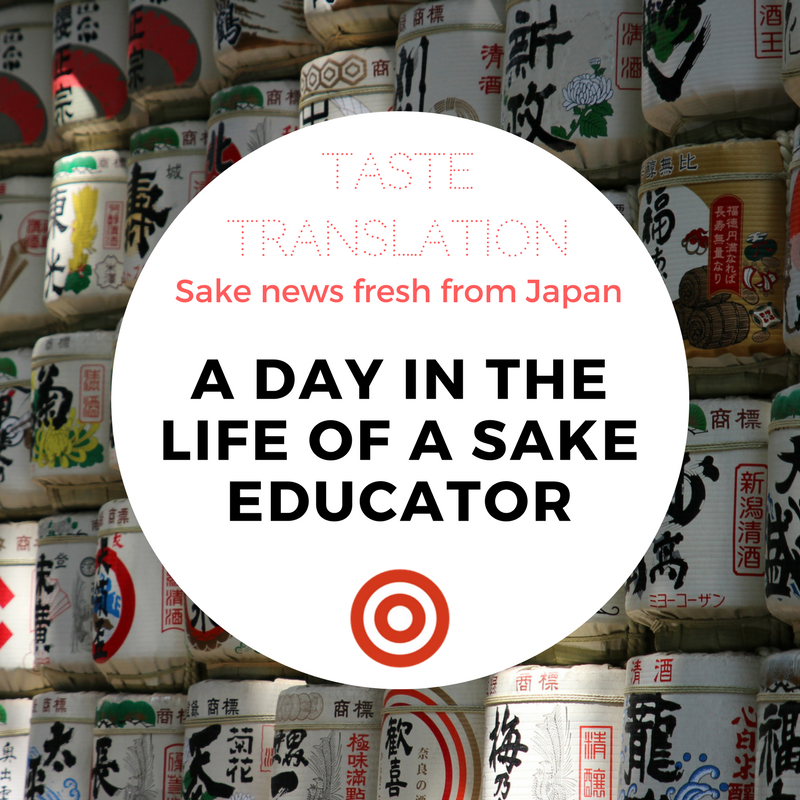 Excite News ran a story on 26 September 2017 (updated 3 October) in their “Shigoto wo shirou” (understand this job) series talking about a day in the life of a sake educator.

The practice of tasting in Japan is called kikizake (利き酒, discernment or mastery of sake) and someone who has passed a qualifying course is known as a kikizake-shi (where the final character, 師, denotes a teacher, instructor, or someone qualified). Bearing in mind that sake in Japanese just denotes alcohol – nihonshu (日本酒) is what we call sake – the same terms are used for wine tasting and wine tasters.

The article starts by reviewing exports over the last 10 years, which have increased in value by 2.5 times (6.1 billion yen in 2006 to 15.6 billion yen in 2016). It also notes that although the bottle labels carry information such as milling/polishing ratio and sake meter value (also known as SMV or nihonshu-do) – some required by Japanese law – that give an idea of the aroma and flavour of the sake inside it’s still hard to pick out a brand that you like. The story focus on manzai comedy duo Nihonshu, made up of Kazuaki Kitai and Asaya, who focused on sake after becoming qualified tasters.

Asked about a normal day and what their schedule looks like, they said that describing what they do as a “somellier for sake” made it easier for people to understand. Working at at food and drink companies like shops that sell sake and izakaya, or at sake events, they ask guests what they like and what their budget is, suggest sakes they may like, and talk about its history and appeal. They studied with the Sake Service Institute (SSI). The qualification requires attending lectures and passing an exam, and there are currently about 30,000 people who hold it.

The interview then goes on to ask them about the good and bad aspects of the job. Kitai stresses that both sake education and manzai are about making people enjoy themselves, and he loves recommending sakes as it’s not possible to tell what they taste like just from the label – being thanked by the customer is his reward. He finds it difficult when he can’t sell everything during periods designated for summer sake or hiyaoroshi (just-matured sake produced over the previous winter and sold in the autumn) and feels bad for the brewers. (Sake Times has an interesting article on “summer sake” being a recent invention through the SSI course, I’ll go into that another time!) Asaya loves it when customers become fascinated with sake through their recommendations, including getting them interested in lots of different breweries. He doesn’t like how smelling and tasting hundreds of sakes leaves him tipsy, or how he can’t avoid drinking if he’s not feeling up to it. It also goes against the original reason he started drinking sake, which was for the enjoyment, but he counts it as a mixed blessing.

They decided to deepen their knowledge of something they were interested in to give their manzai audience more opportunities to see them, and went for the Sake Navigator qualification after a friend told them about it, then went on to take the kikizake-shi (Master of Sake) qualification. When asked what kind of person would be suited to becoming a kikizake-shi, Kitai says that the ability to communicate is essential and particularly being able to communicate information without sounding boastful or like you’re just transmitting information. You need to be able to really see and engage with the person you’re speaking to. Asaya thinks that an interest in food and cooking helps, as being able to recommend food pairings helps to increase the consumer’s enjoyment of sake. He also thinks its important to actively seek out events where you can practice tasting and really train your palate, and to be able to enjoy it in any situation.