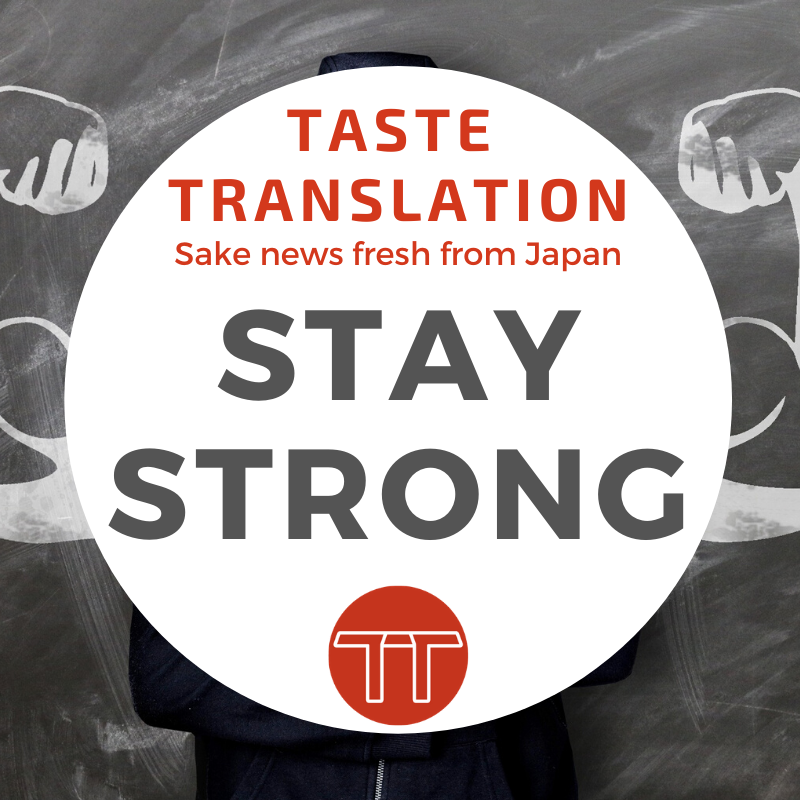 Ritsuko Kiyomizu reports for Reuters Japan on long-established sake breweries starting to make high-strength alcohol suitable for use as steriliser.

Official advice to use alcohol-based hand steriliser, and increased use of sterilising products in general during the spread of coronavirus, has led to a shortage of suitable products in Japan. Like many other breweries and distilleries around the world, some sake breweries are switching to production of high-strength alcohol that can also be used as steriliser.

Their products are technically for human consumption, but also address a continuing shortage of sterilisation-strength alcohol by serving as alternatives to medical products subject to more stringent legal regulations (which therefore aren’t able to ramp up production quickly).

Katō Shuzōten, founded in the last years of the Edo Period, is the parent company of Meiri Shurui in Mito, Ibaraki. Meiri Shurui make the sake Fukushōgun and the shōchū Manyūki, converted their existing brewing and distilling lines to develop a product with 65% alcohol.

Acting Sales manager Atsushi Katōgi commented that their customers had called on them as an alcohol producer and retailer to help during the crisis, which prompted them to develop their high-strength product. They anticipate that stay-at-home advice from the government will lead to more people drinking at home, and say they intend this high-strength product to be treated as a drink.

Wakatsuru also commented that seen the shortage of high-strength ethanol, they as alcohol producers decided to make it themselves. Their production capacity is about 1,000 bottles per week, and they’re prioritising deliveries to hospitals, shops they operate and drugstores in the Hokuriku area.

These substitute products are intended to be a temporary measure. Although they contain as much alcohol as sterilising fluid, they carry a disclaimer that they are not manufactured as disinfectants or sterilising products. They can’t be advertised as effective against bacteria or viruses, and are subject to alcohol taxes. Despite all this, they have been attracting a lot of attention as alternative sterilisation products. Kikusui were even momentarily overwhelmed by the flood of enquiry and order emails they received after launching theirs.

The issues with supply of disinfectant ethanol remain unresolved and regulations in the Pharmaceuticals and Medical Devices Law for quasi-drugs such as disinfectants, such as obtaining manufacturing authorisation, means that it’s not easy to bring in new producers.

Seen the situation, the Ministry of Health, Labour and Welfare (MHLW) informed members of the Japan Hospital Association (JHA) at the end of March 2020 that, as a temporary measure, high-strength ethanol products could be used as substitutes for ethanol hand steriliser. This gave a measure of legitimacy to the high-strength products developed by breweries and distilleries.

Ministry of Economy, Trade and Industry (METI) figures show that year-on-year production ratio of alcohol for use as hand sanitiser in was 1.8 in February 2020, and 2.2 in March 2020.

Suntory Holdings produces sterilisation liquid in the USA and Spain, and is currently considering production in Canada.  They also commented that although there are domestic regulations in Japan, they were actively looking for some way to help and it seems clear they are considering making liquid disinfectant.

Chemical and cosmetics company Kao Corporation, who were already contracting other companies to make sterilising products, announced on 9 April that four factories normally producing other goods such as shampoo would now be making sterilisers, and they expected to have the capacity to produce over 20 times as much by the second half of April. Their PR office said they were working with the government to speed up the process of obtaining the necessary manufacturing authorisation.

NHK reported on 21 April that new temporary licences were available for breweries that didn’t already have a licence for higher alcohol products.

← A new sake rice from the land of happy Some sake with your takeout? Now you can in Japan →