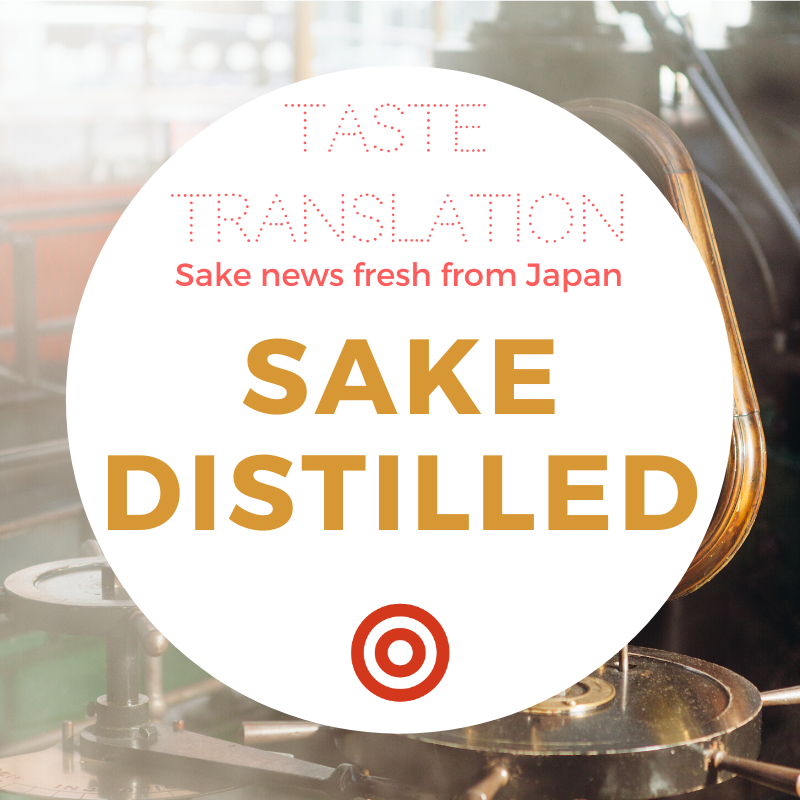 News2u.net announced the launch of a new sake-based drink – “Purified Spirit” or jōchū (浄酎), made from sake that has been distilled [浄溜 instead of蒸留, using a pun on the characters for ‘purified’ and ‘receiver’] and matured in wooden barrels. Distilling the sake is said to result in a mellow, clear drink with the aroma of sake and a sensation of slowly spreading across the tongue.

Start-up Naorai (直会, named after the practice of giving sake offered to the gods to festival-goers after a matsuri) was set up in Jinsekikōgen, Hiroshima Prefecture in 2015 in an attempt to stem the tide of sake brewery closures over the last few decades.

Naorai started a crowdfunding project on 10 November 2019 on the MOTTAINAI motto (MOTTAINAI もっと) site, offering  sake only available this year [Reiwa 1, due to the accession of the new emperor] in numbered limited edition bottles, tasting sets, and other rewards.

The company has a united production-to-market concept that prioritises nihonshu sakagura [breweries making sake], the natural environment and their pun on purification/distillation, and also aims for sustainable production. They’re currently working with a number of breweries in the mountainous areas of Hiroshima, bringing their sake to the picturesque mountain village of Jinsekikōgen for distillation.

The resulting drink can be enjoyed on the rocks, in cocktails or ice cold from the freezer.

The production process used aged sake and a patented low-temperature distillation technique that preserves the sake’s distinctive aromas. The resulting drink can be stored at room temperature, so it’s also suited for export.

The bottles were designed by Eisuke Tachikawa, head of the NOSIGNER agency, and hand made by the venerable Sakai glass company. The distilled sake offered as a reward in the crowdfunding appeal is bottled without any addition of water to create a genshu [原酒, undiluted alcohol] series, or aged in wooden casks for a kidaru jukuseishu [木樽熟成酒, barrel-aged alcohol] series.

The project aims to add value to sake held in storage at sakagura, stock the brewery was unable to sell, and bring it to the world in a new form. This also takes the unsold sake out of the brewery, and respects the Japanese concept of mottainai (not wasting things). Another aim is conversion of rice fields to organic farming, with the company estimating only 2 in every 1,000 rice fields uses organic cultivation.

A final goal is the revival of closed breweries that have fallen into disuse all over the country, such as the one in Jinsekikōgen that Naorai is using as a distillery. The company envisages reopened breweries operating as distilleries while retaining their important history and culture for future generations.

‘Purified Spirit’ is distilled to between 41-45% abv and offered in 700 ml and 180 ml bottles with different designs. It’s also available in three varieties, undiluted genshu, barrel-aged kidaru jukuseishu, and made from yūkimai organic rice. The crowdfunding project runs from 10 November 2019 to 28 Jan 2020, with rewards costing JPY 5,000 to 1,000,000.