This was another rather fortuitous event. After I decided to go to the International Wine Challenge (IWC) sake trophy winners tasting at the Japanese Embassy in London, I followed IWC on Twitter… and they were promoting WABI! As it turned out, I had booked to fly back to Zurich on Friday evening, so I had time to attend the trade day on Friday. I applied and seemed to get a positive response, but hadn’t received anything by the time I left for the UK so I got in touch with WABI’s team and they kindly resent the ticket to my hotel in London and I got it at the beginning of the week.

Held in a Royal Horticultural Society hall close to Victoria Station, there was already a respectable queue forming by the time I arrived at what should have been the start time. (I’ll remember that, turn up early for the next one…) The staff kept the lines moving and I had a chance to thank the woman who had sorted out my tickets in person. I collected my badge, dropped off my case at the cloakroom, and went inside to pick up brochure, free tasting glass and wrist band for Kenichi Ohashi’s tasting session! I was really excited about the latter as I’ve come across him before and he’s also the author of the foreword for the WSET textbook.

The rectangular hall had the glass collection/workshop area just inside the door on the right, then the right-hand wall was lined with small booths. There was a JNTO “networking zone” in the far corner, more larger booths at the back and down the left hand wall, and an IWC tasting area in the middle. I went in without much of a plan and ended up spending all my time just going up the right hand side of the hall!

First was Nihon Shurui Hanbai Co., Ltd., who had a selection of unusual beers (including rice and wasabi) and Daina sake from the Kikunosato brewery. I got talking to the woman behind the desk, who had the WSET Level 3 Award in Sake textbook out on the desk! When I told her I was a translator, she joked about being a “mickey mouse” interpreter but as I generally don’t interpret at all I’m still impressed. 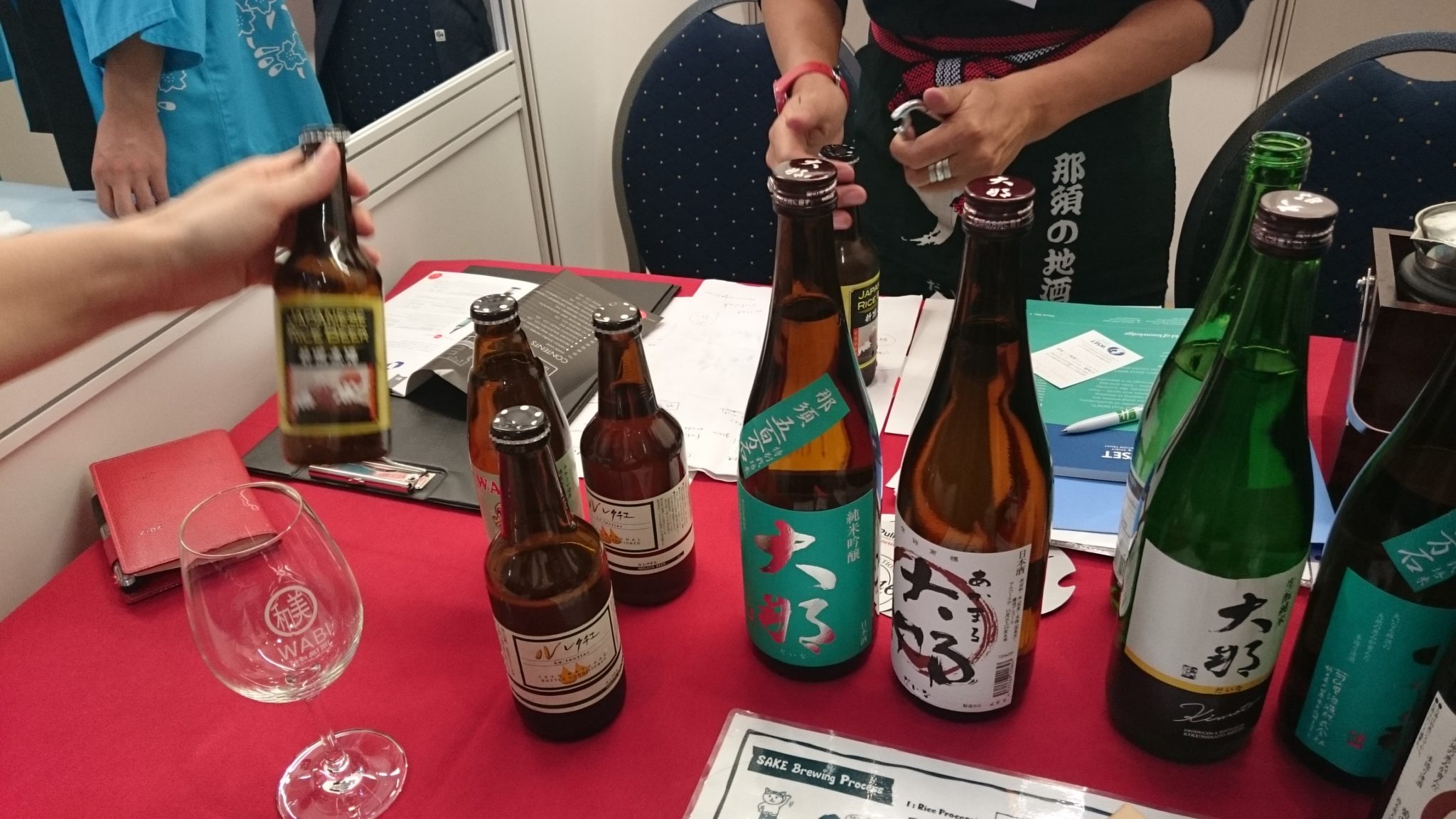 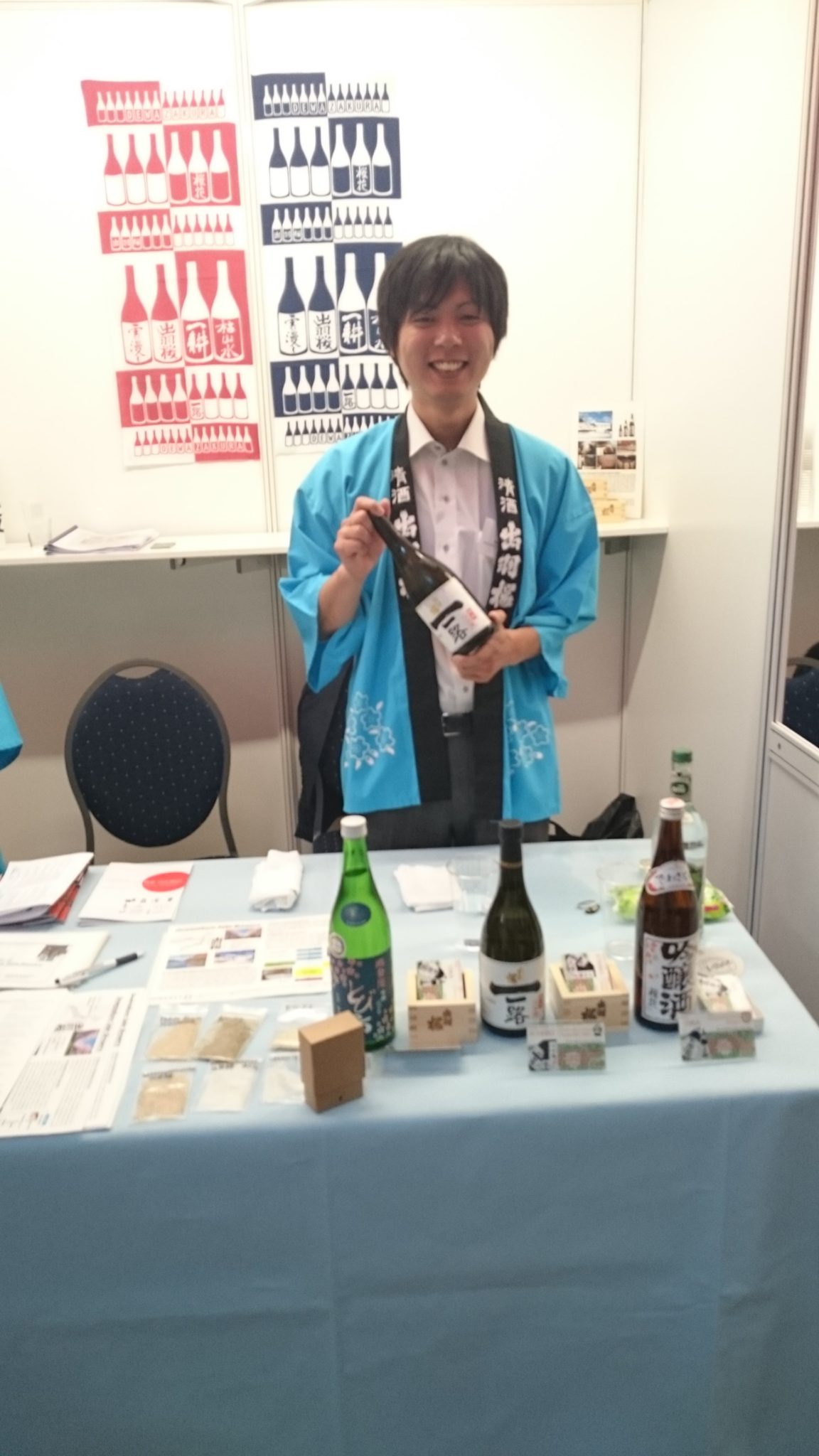 There was a familiar face at the next stand – the Dewazakura brewery! They had brought their wonderful sparkling sake, Tobiroku, winner of the 2017 IWC trophy. Bubbling softly and wonderfully flavourful, it was far too easy to drink for something that was 15%. I thought it might go well as a summer party aperitif or in a cocktail, and Shotaro Nakano (pictured left) said they often recommend it for barbecues. I’m hoping to visit them in Japan later this year.

Their neighbour was Tonoike Shuzoten, based in the beautiful town of Mashiko – famous for another interest of mine, pottery. Company president Shigeki Tonoike is also the chairman of the Mashiko Town Tourist Association and was a great spokesman! It’s also on my list to visit.

As an aside, while looking through the brewery sites I realise how many of them have sidelines in cosmetics made from sake lees. I’ve seen reservatrol-based products in Jerez, Spain before, and there is a (tenuous!) connection to anti-ageing there, but not sure about sake lees. Making a note for future research.

Next was another familiar face from the IWC event at the Japanese embassy, Iimori Naoki of Fukuchiyo Shuzo Co., Ltd. based in Saga Prefecture in Kyushu, with his sake Nabeshima.

His neighbour was yet another IWC trophy winner, this time Kan Otsuka of Nabedana, Inc., a brewery located not far from Tokyo in the green garden belt of Chiba, close to Narita airport.

Yet another embassy attendee was next door, this time Jun Ito of Ito Shuzou Co., Ltd., who make the wonderful Uzume – I managed to get some good shots of the gorgeous labels this time! 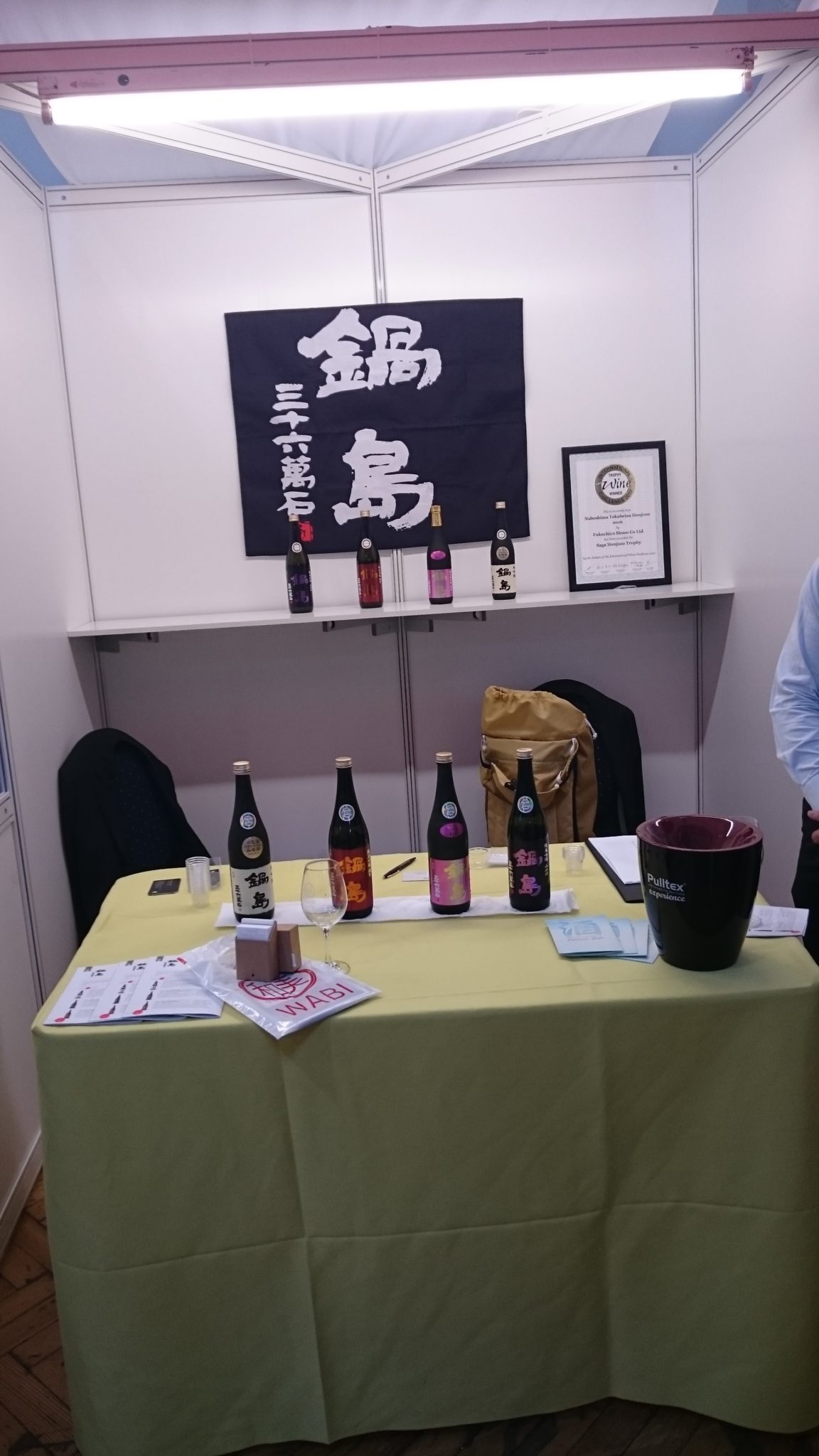 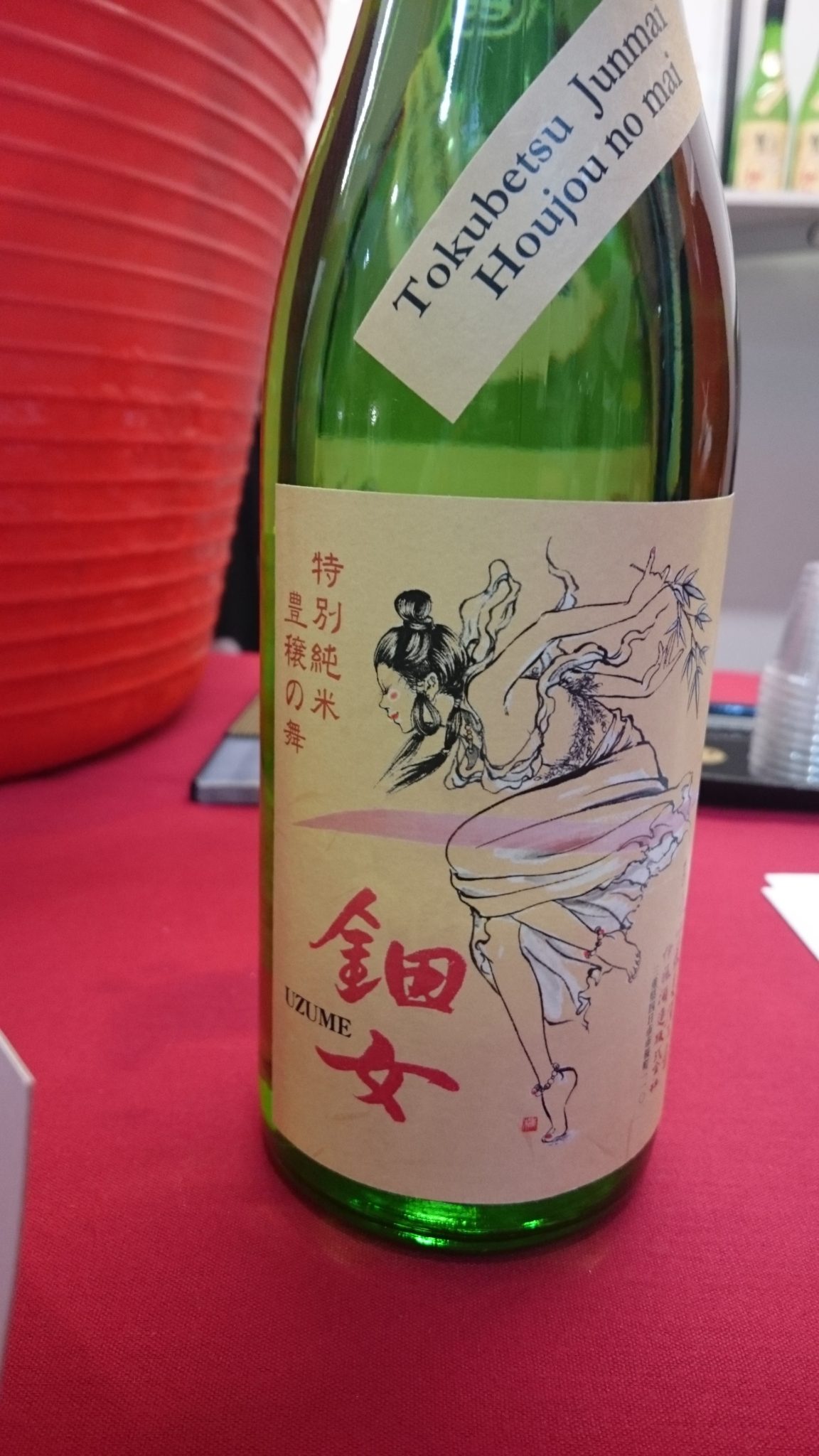 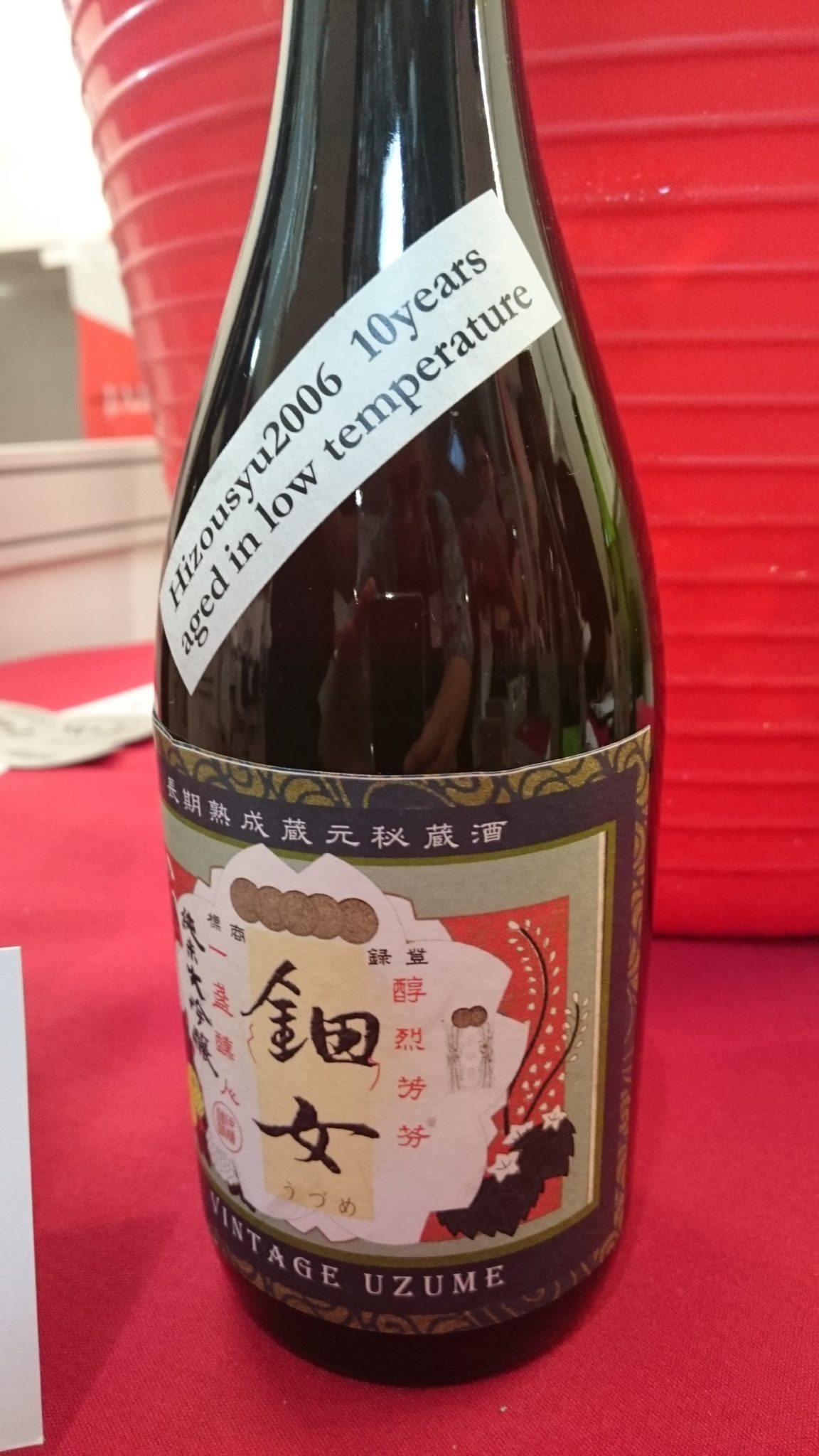 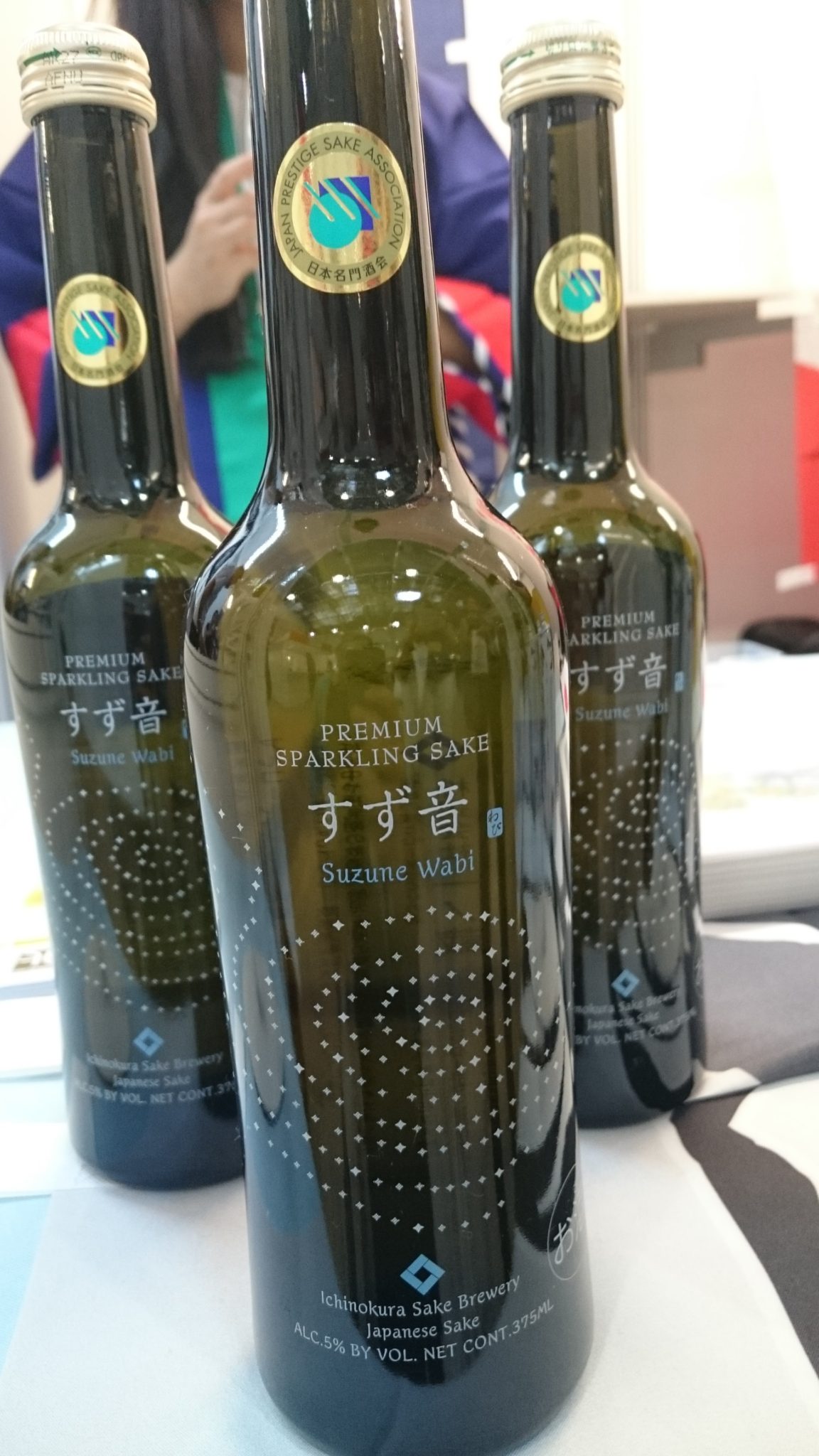 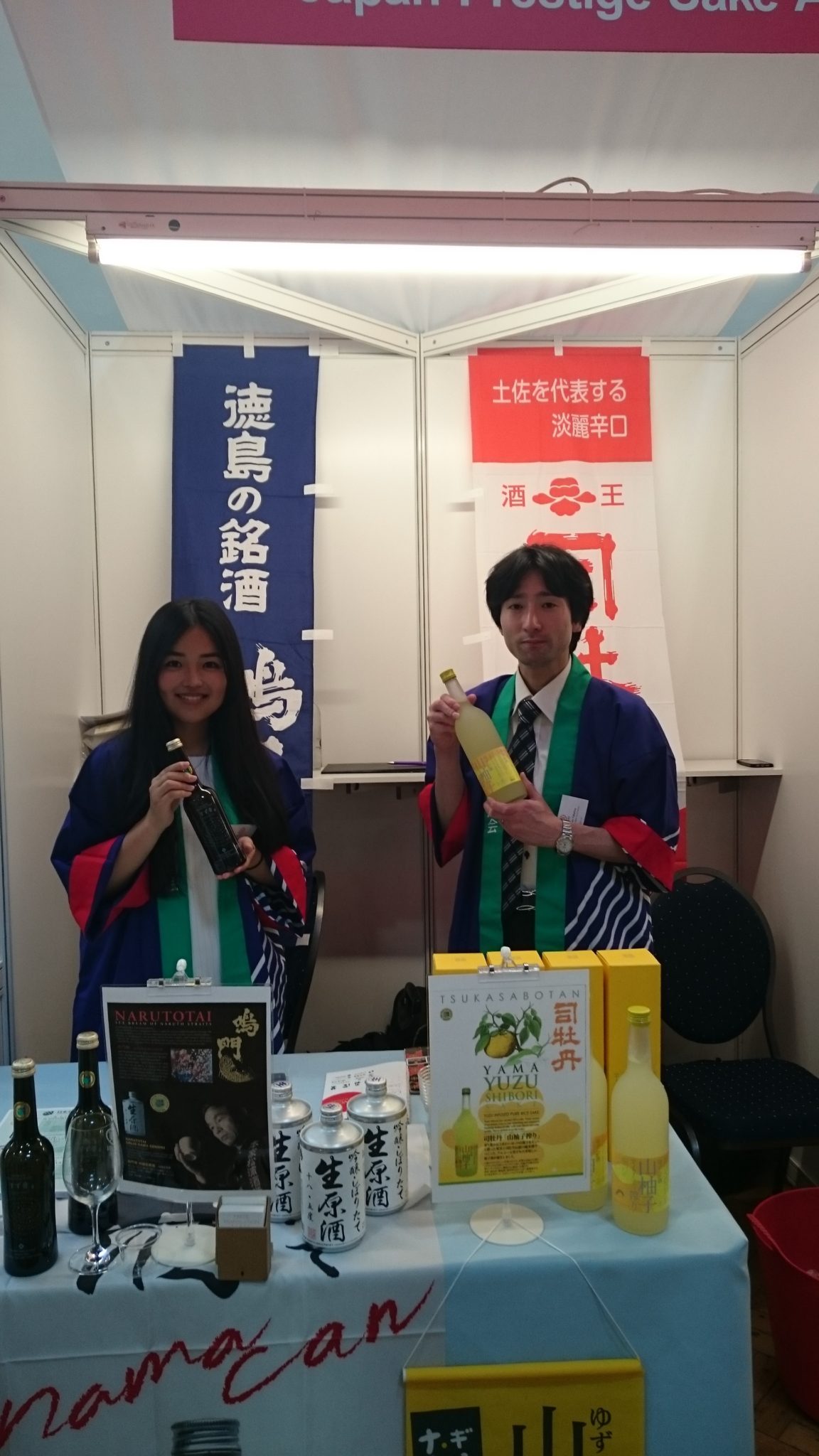 The following stand was the Japan Prestige Sake Association, represented by Masamitsu Takatsu. He was serving Ichinokura‘s sparkling sake Suzune and Tsukasabotan‘s delicious yuzu sake Yama Yuzu Shibori. (I admit it, I’m all over anything with unusual Japanese citrus fruit.)

Katsumi Tanaka of Daishinsyu Breweries Inc. was at the next stand, offering not only his sake but also a menu of tasty bites developed by Yamao to complement them.

Interestingly, one comment I’ve heard from a few people is that the Sake Service Institute (SSI) sake course spends a lot more time on food pairing, which is only given cursory treatment in the Wine and Spirits Educational Trust (WSET) course. So it was interesting to see the food pairing here, and it was the only stand that I visited that was offering it. Mind you, that could have been a question of the additional logistics of providing matched food over and above bringing sake from Japan. 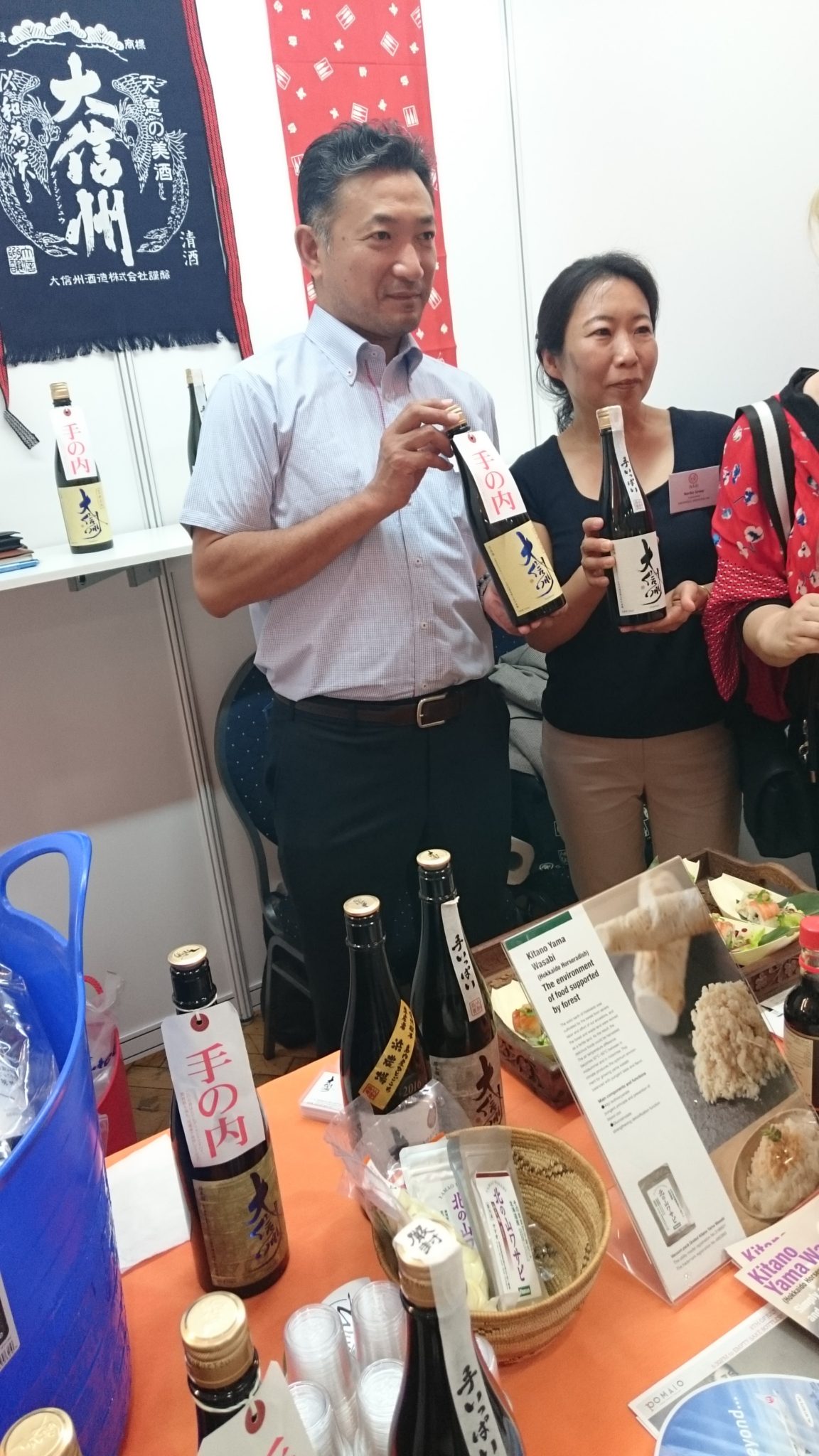 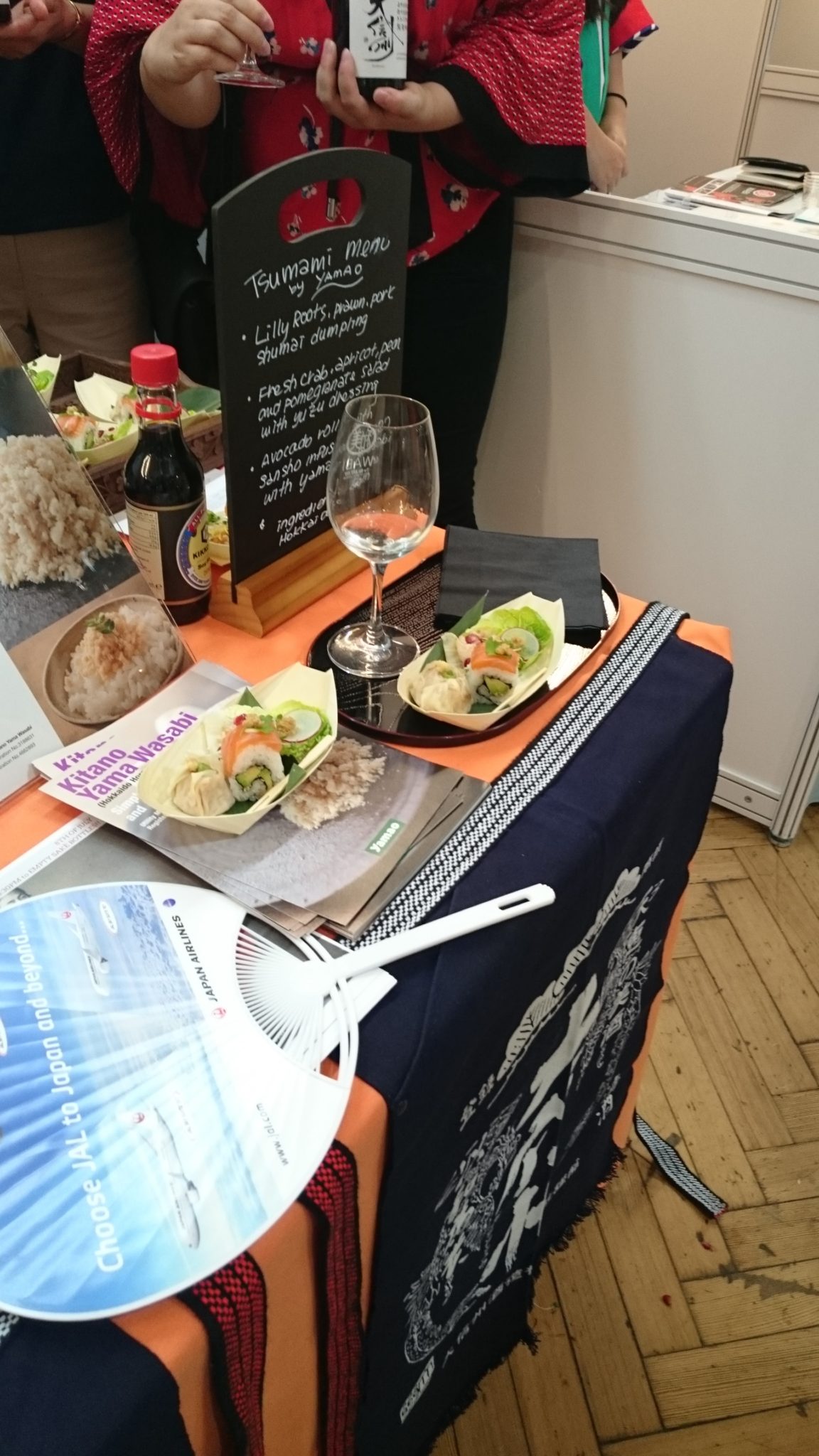 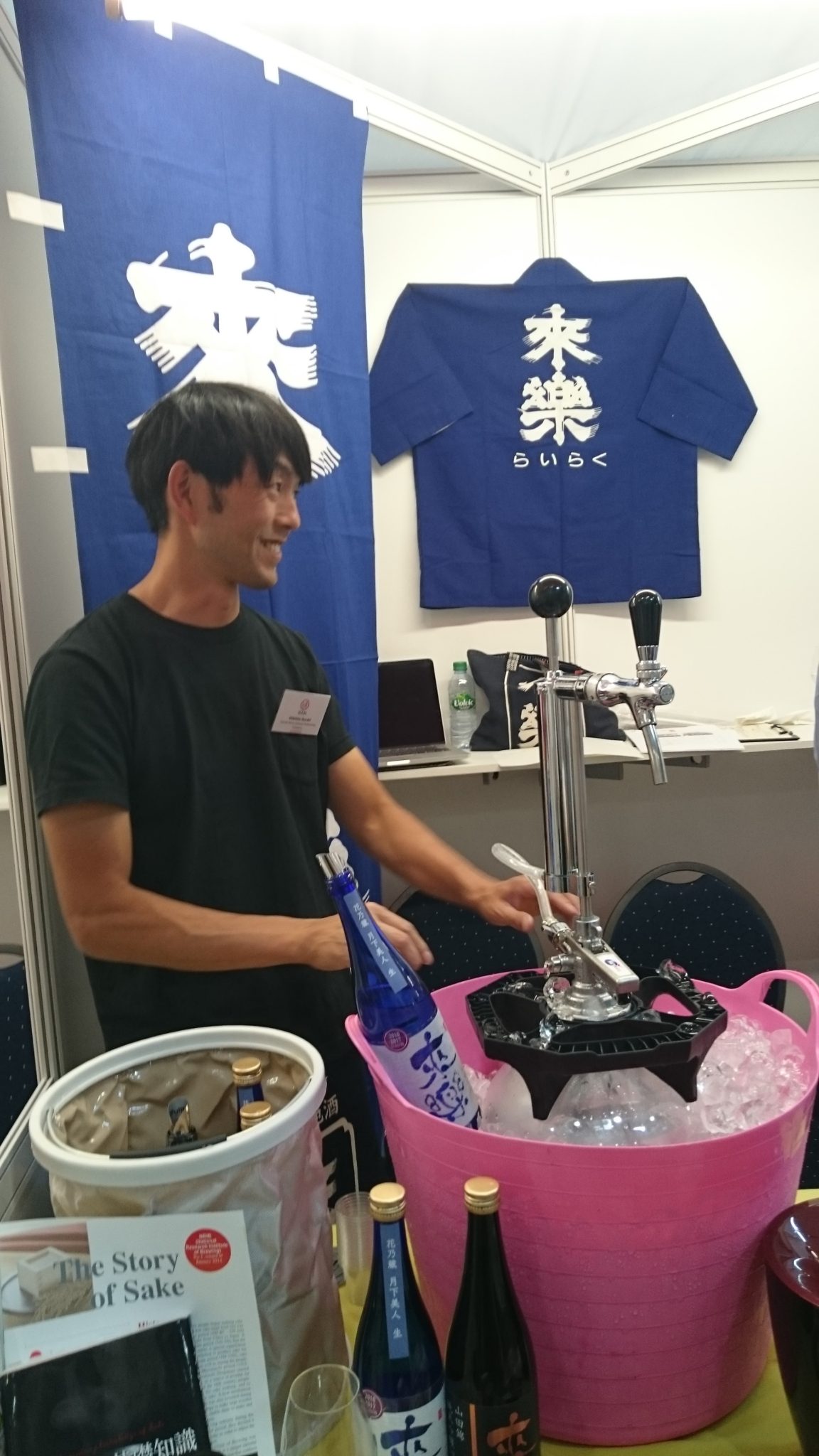 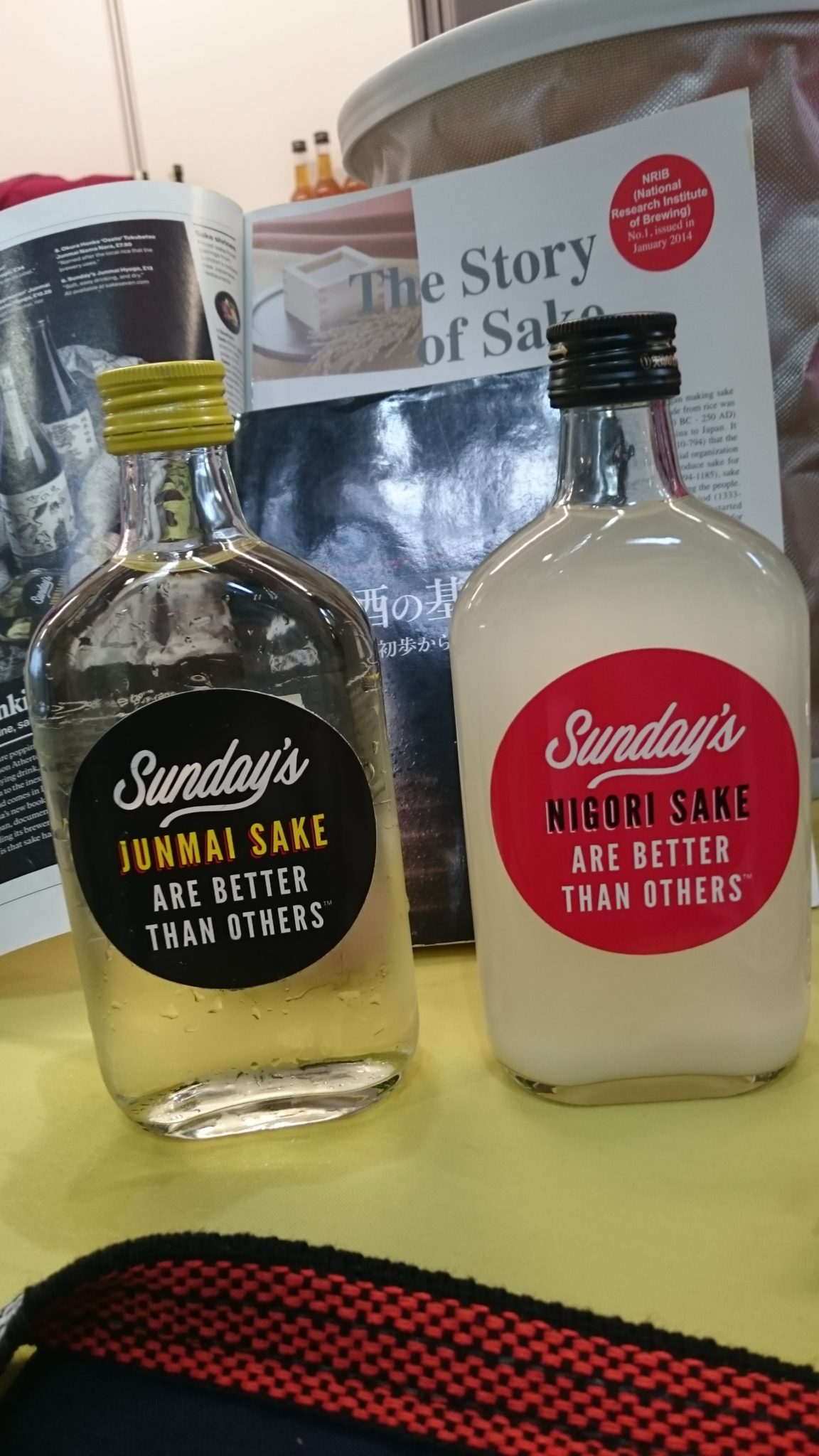 Mikihito Ibaraki of Ibaraki Shuzo had brought his sake Rairaku, and in a format I’d never seen before – an iced keg of unpasteurised sake with a beer-style tap, which kept the sake safely isolated from the air. It was wonderfully fresh and chilled!

Uzume had a strong contender for labels in the gorgeous woodblock print-style images of cranes on bottles of Konotori, from the Tajime General Partnership which also brews Chikuzen sake. President Hirotaka Tajime was on hand to serve both types, and he later told me about Sake Seven, a group of small breweries who have partnered with a logistics company to make it easier to export. 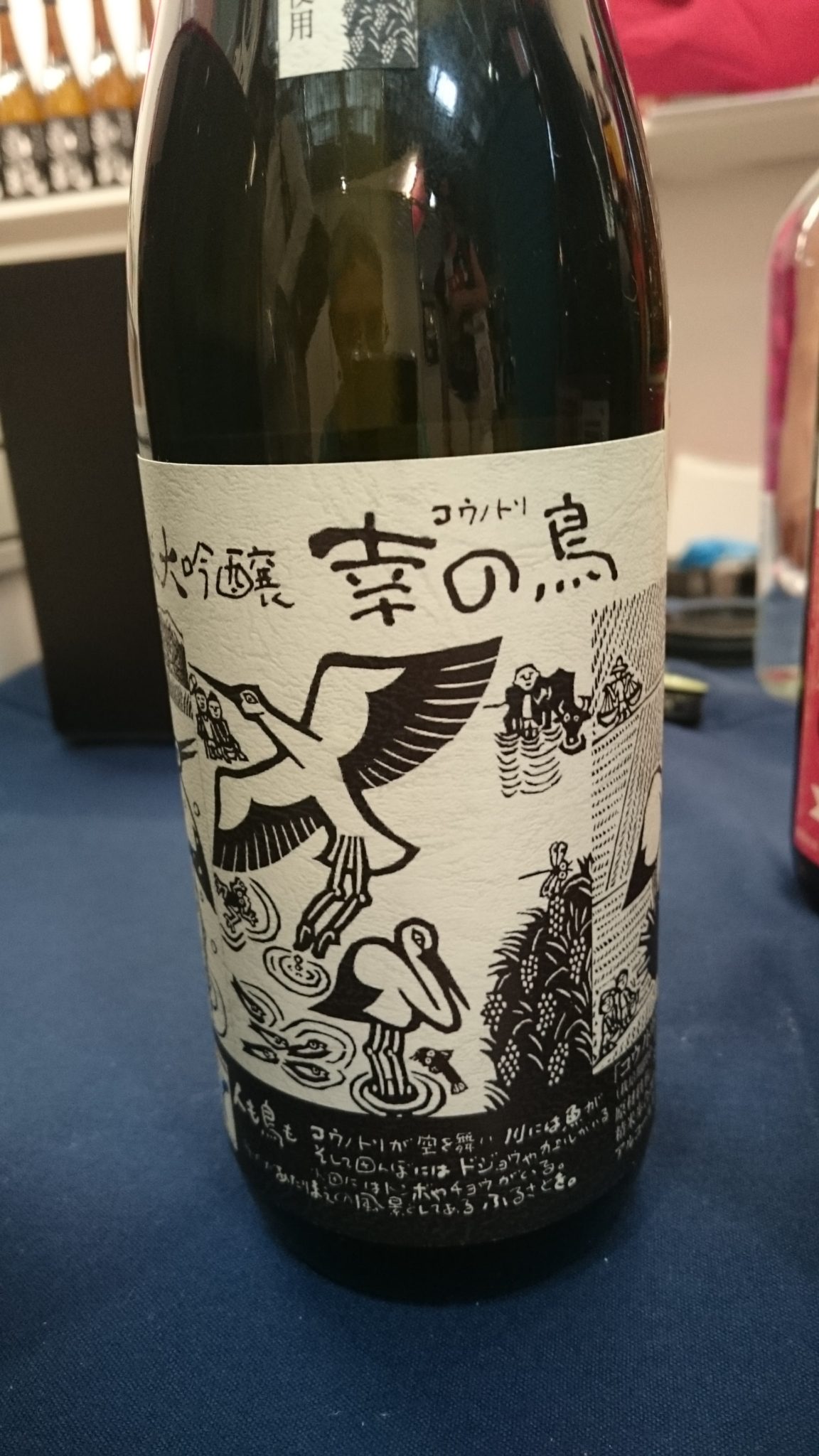 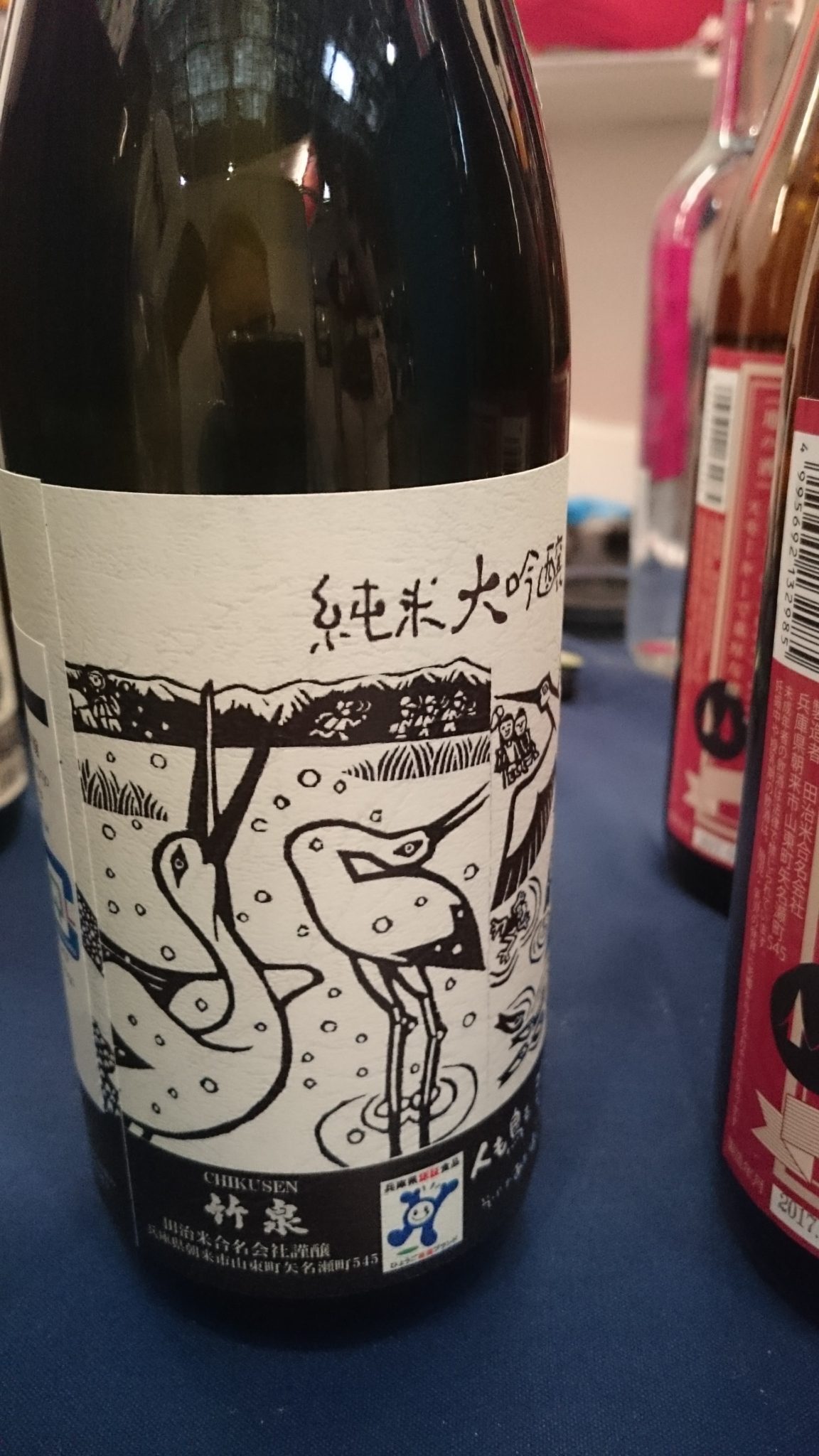 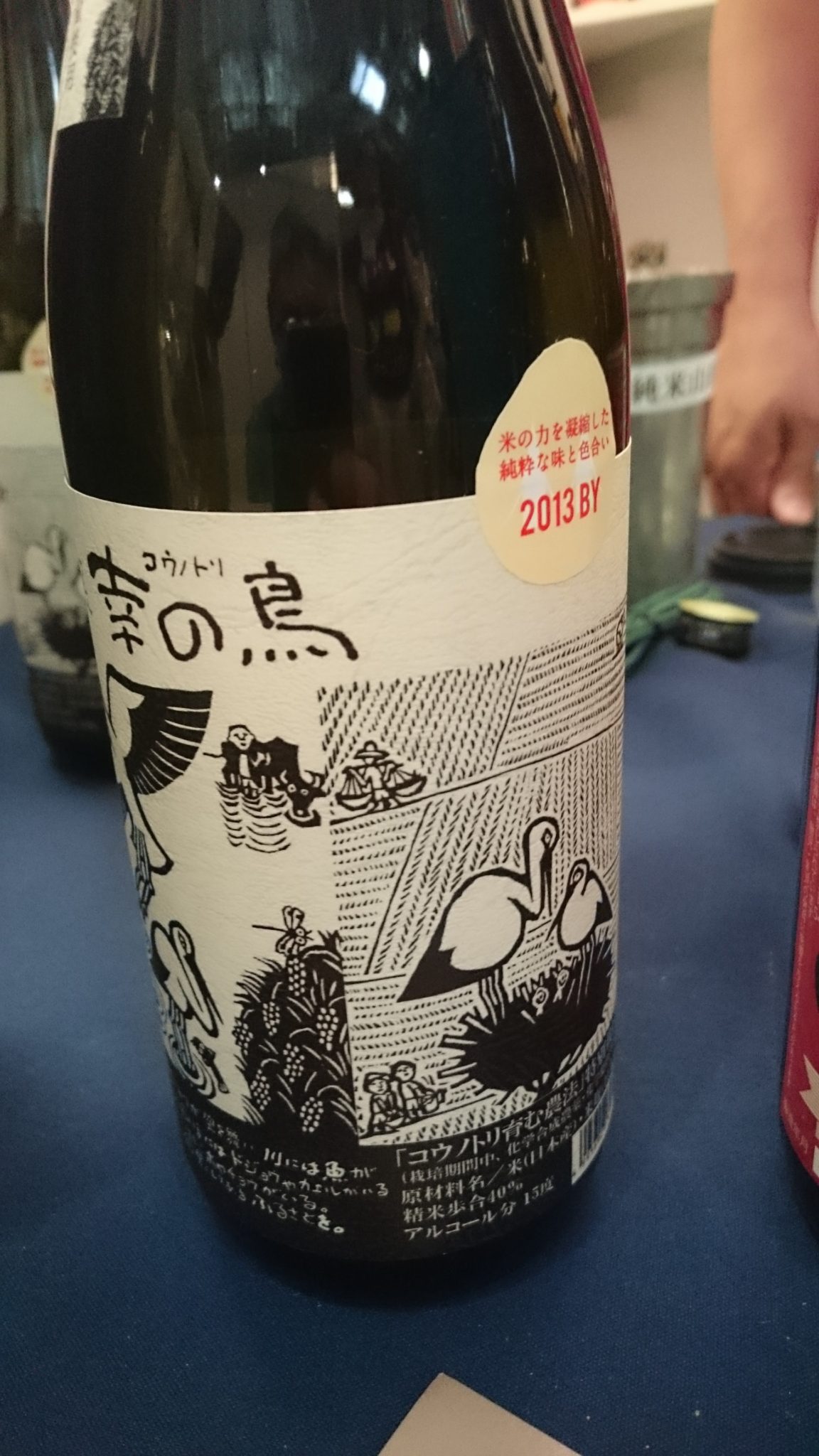 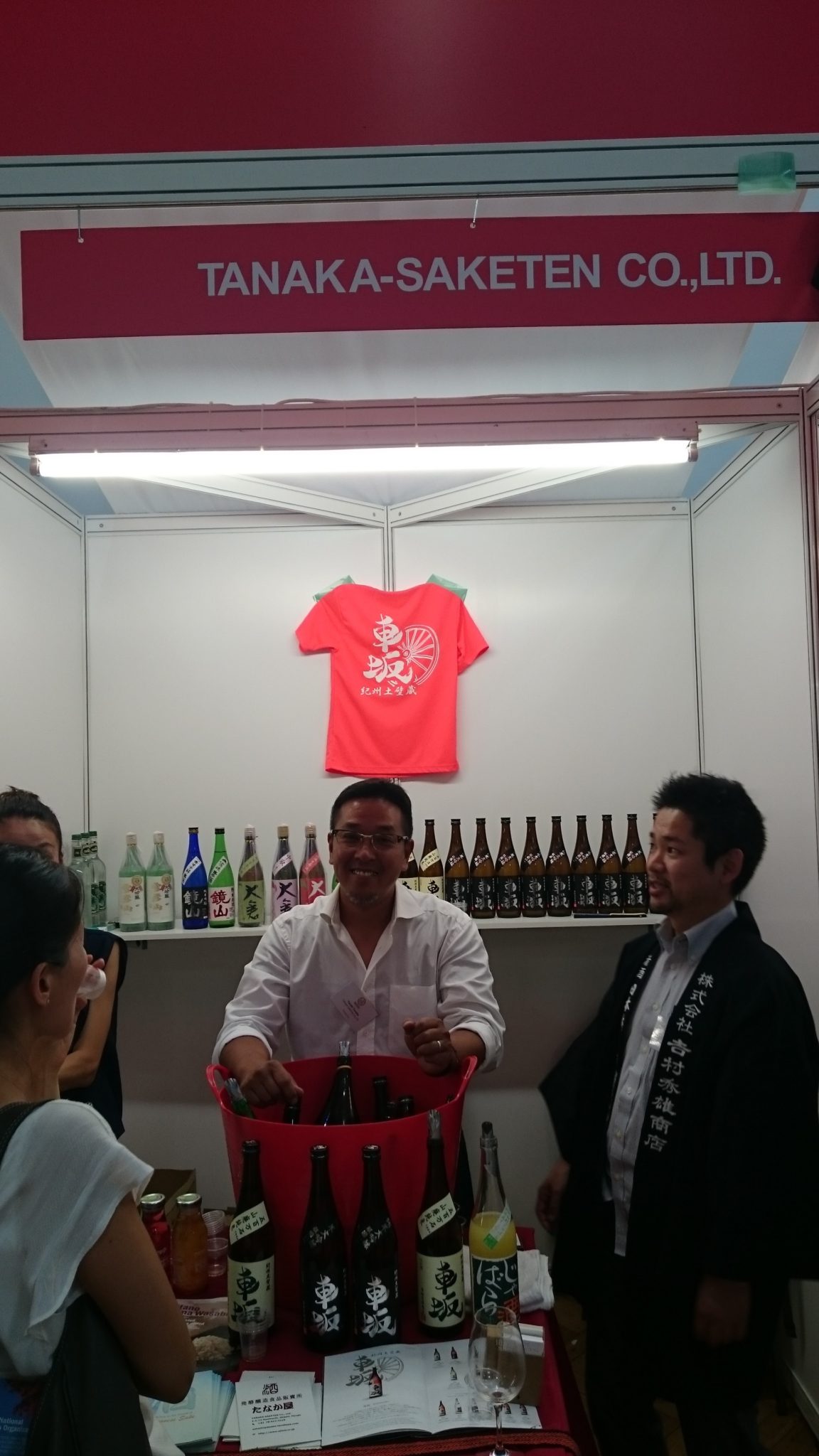 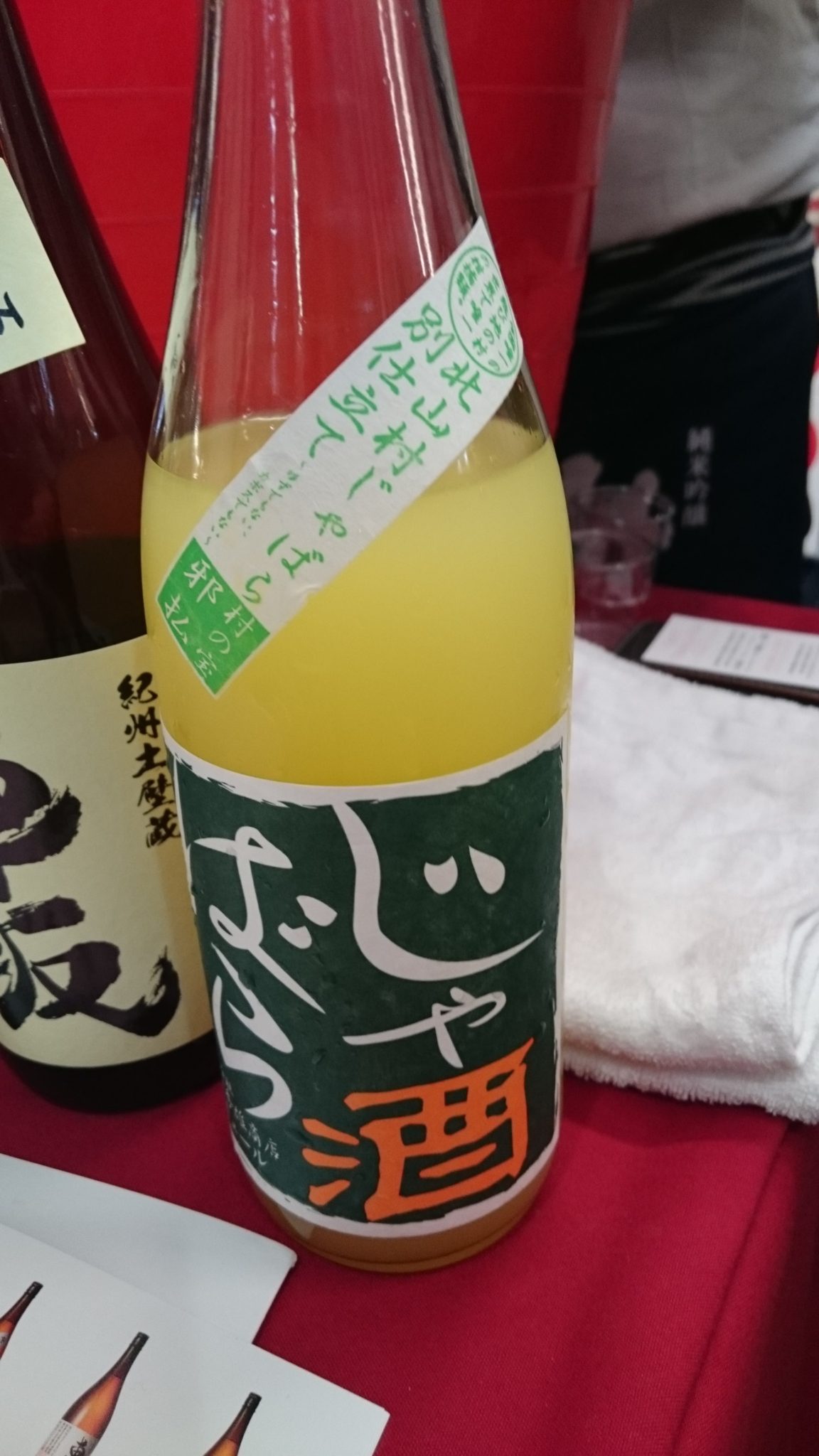 One of the last stands I visited on the right hand side of the hall had one of my favourite sakes! The Tanaka Saketen stand had the amazing, punchy Jabara sake, flavoured with yet another Japanese citrus fruit you’ve probably never heard of. I had a great chat with Shuji Furui of Yoshimura-Hideo Shoten Co., Ltd. about the availability of sake in Europe, particularly Switzerland.

The final stand I visited was Maruki – apparently “Marquis” – Winery, based in the traditional Japanese wine region of Koshu. Yes, there is a small but definite tradition of wine in Japan! Their rose was incredible, tasting just like strawberries.

The “networking zone” was mostly Japanese officials talking amongst themselves, among the posters and mounds of leaflets. 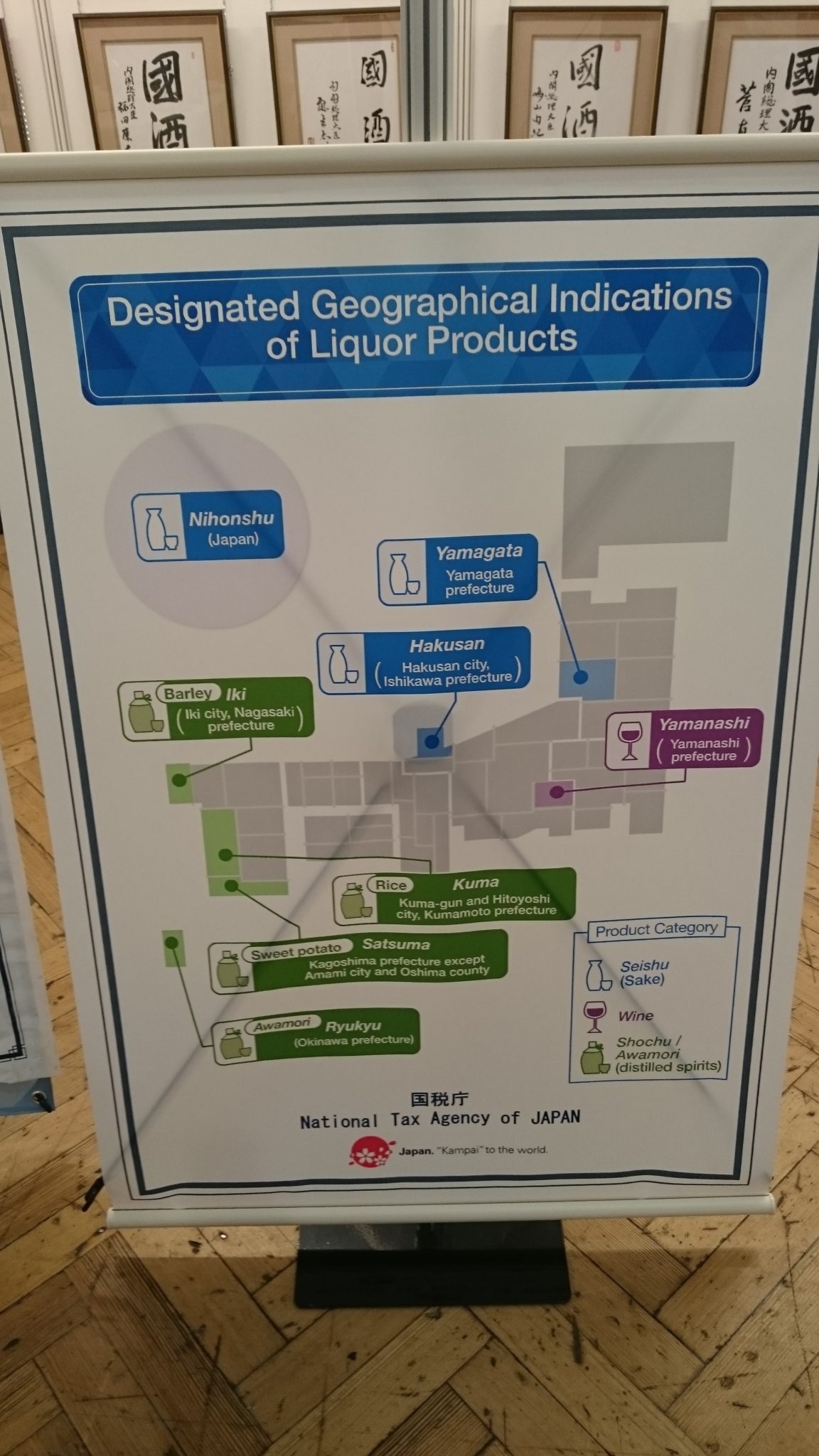 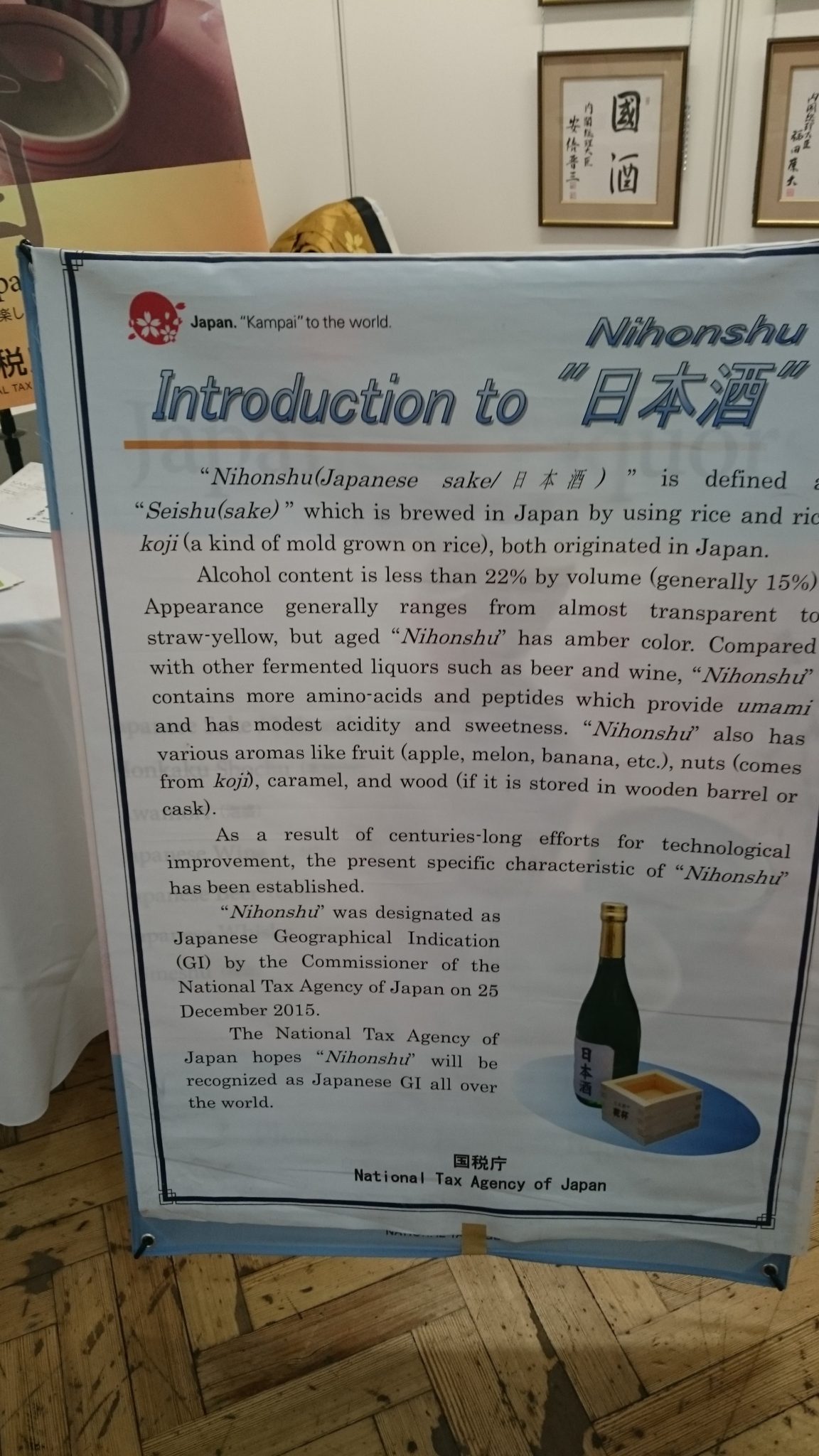 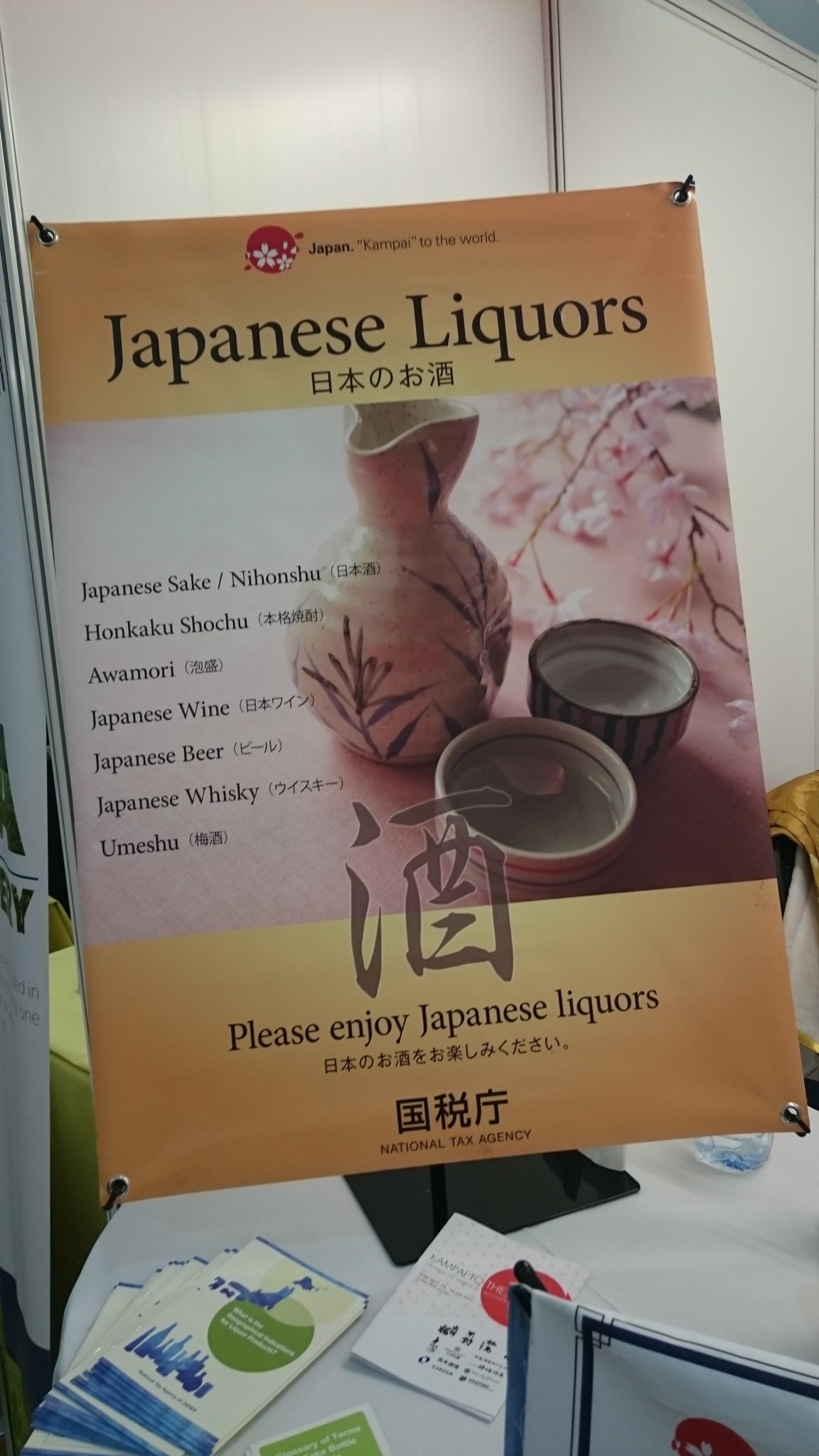 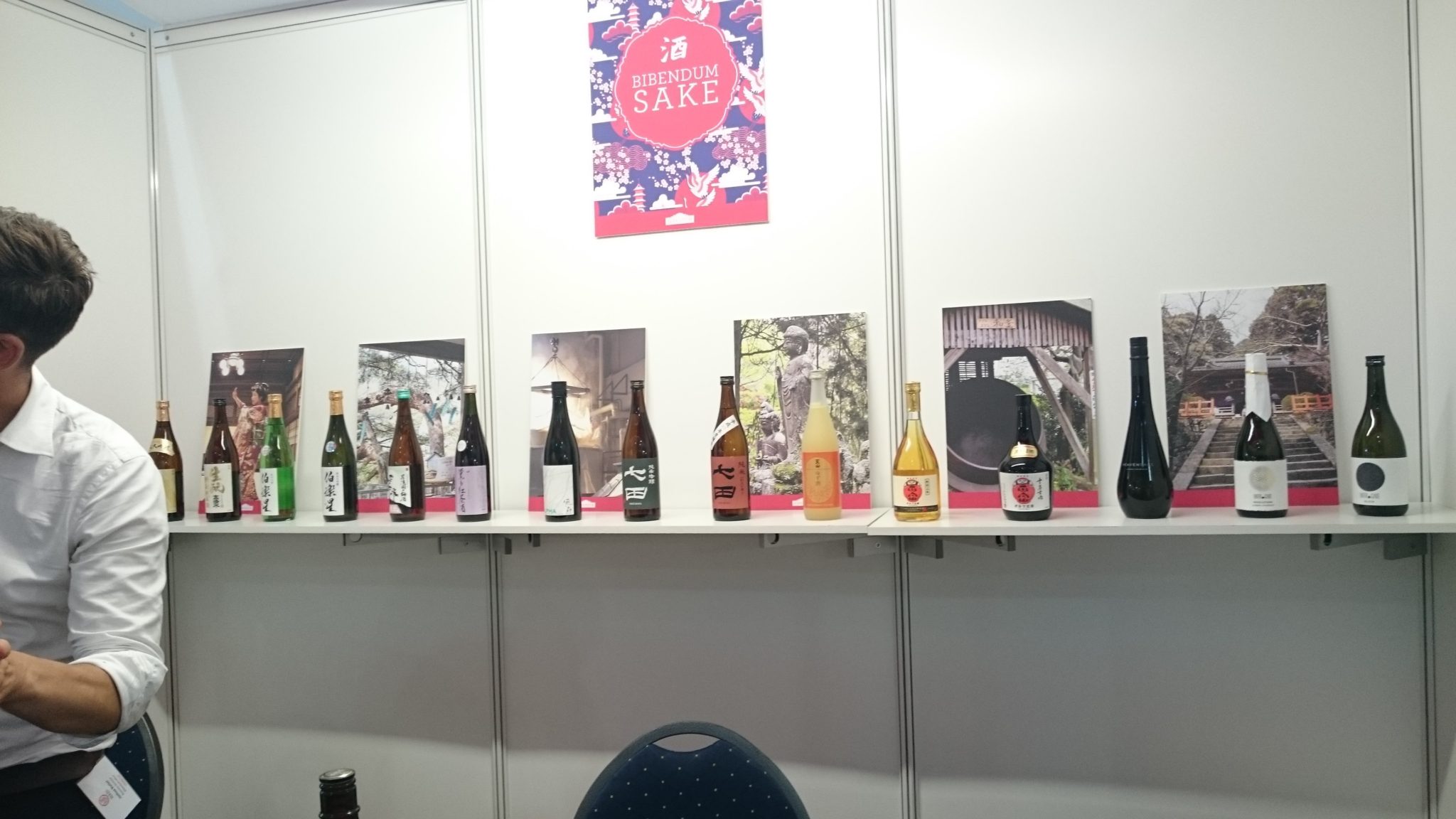 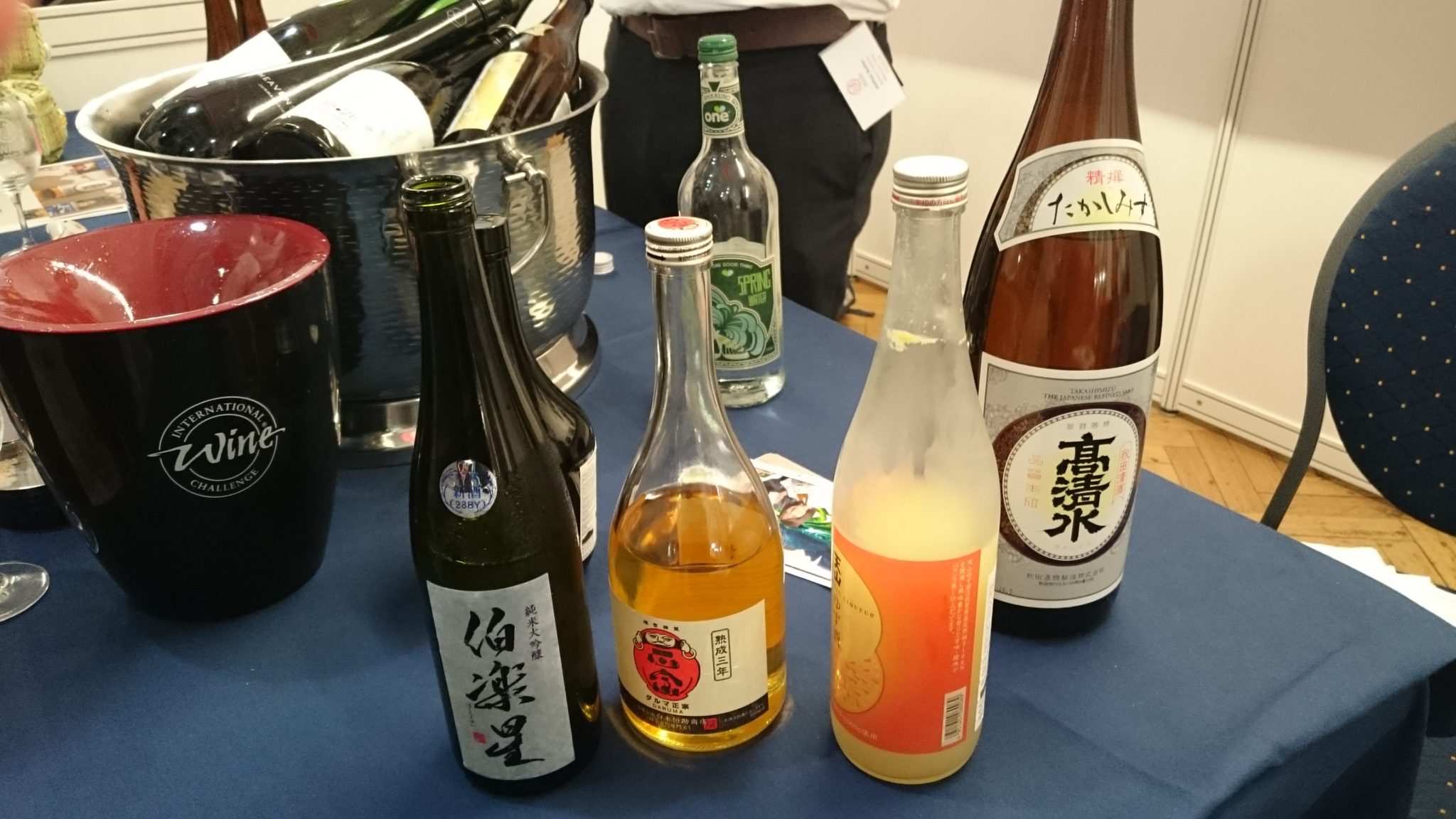 At the back of the hall, Bibendum had a wide range of sake on offer, including Richie Hawtin’s Enter Sake brand. And Natsuki Kikuya was there!

Cellar Trends next door had mostly Japanese whiskey but also one rum from Shikoku, Ryoma, which my brother and his other half bought after being disappointed with the Okinawan rum available at Japan Centre.

The one thing I was most looking forward to was a chance to hear and maybe even meet Kenichi Ohashi MW (Master of Wine) – I’d come across him before and credit him with my becoming interested in sake! His tasting session was scheduled for 3:00 pm, which should have allowed me time to attend and try to have a word afterwards before running for the airport… unfortunately the event running before his, the Hyogo Prefecture tasting, ran over, and then Kenichi ran over as well, so I actually had to leave just as he finished his presentation and was starting the tasting. At least I got to hear him speak live. 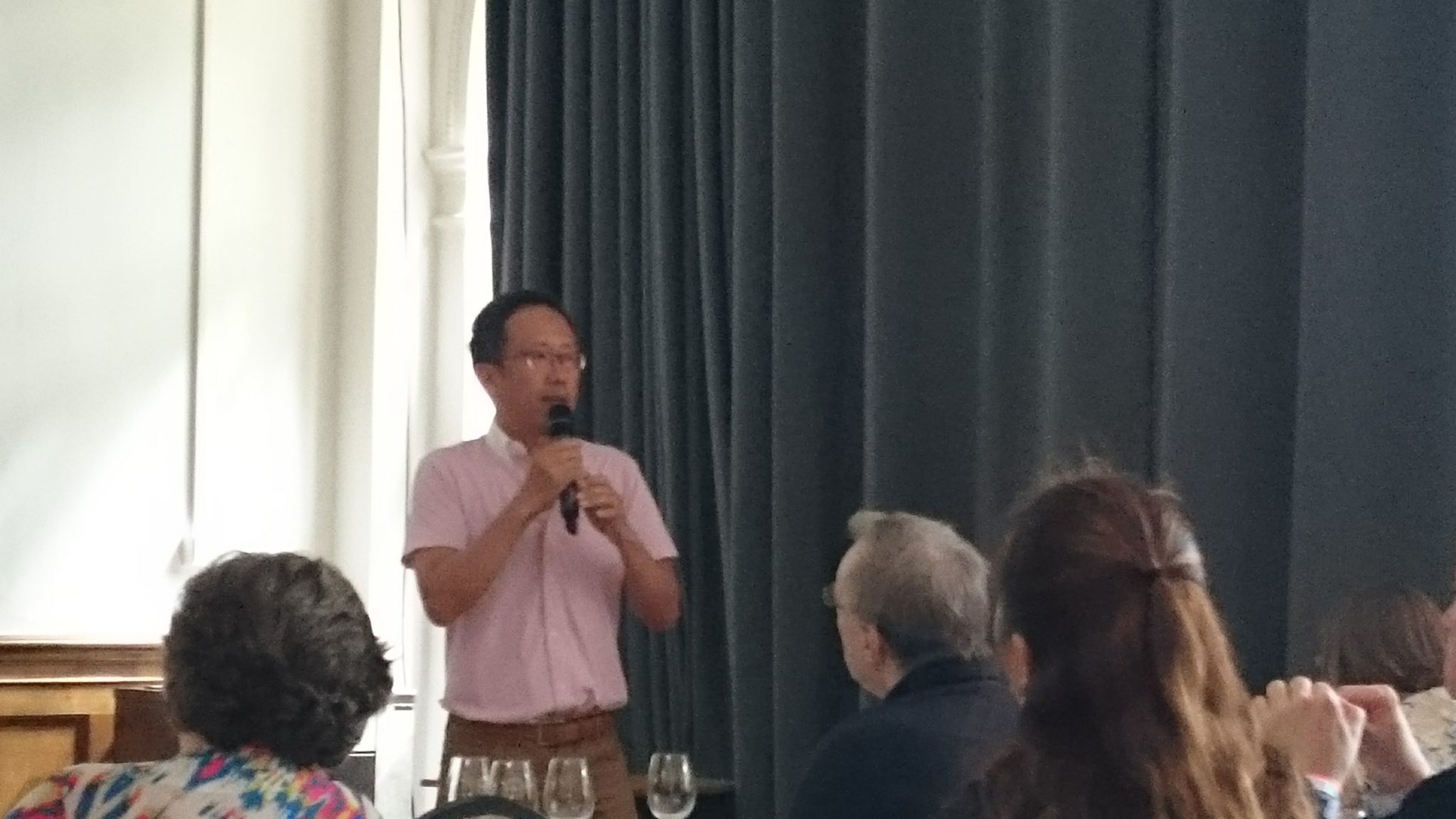 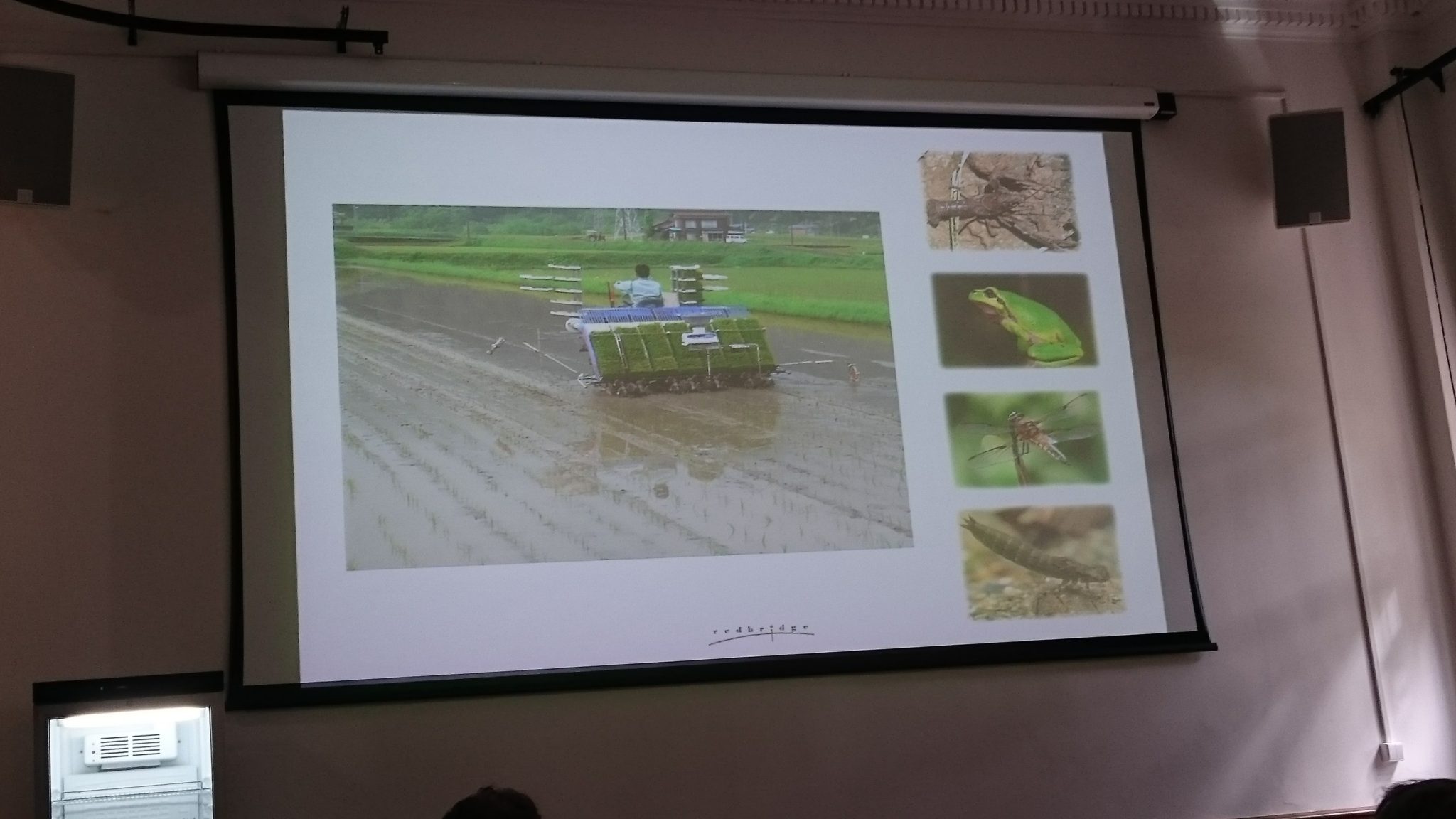 And that was it for me! I scurried out of the tasting as quietly as I could, grabbed my case and speed-walked to Victoria to get the train to Gatwick. I didn’t see half of what was there, the sushi areas, IWC discovery tasting, Choya, Hyogo Prefecture, Clearspring, Japan Airlines (JAL), Japan National Tourist Organization (JNTO), Japan Centre, Aizu Homare, Kamoizumi, Kayashima/Nishinoseki, Marussia/Akashi-Tai, Sake Experience Japan, Urakasumi/Saura or The Kyoto Distillery.

There are currently plans to run the event again next year, and if so I’ll have to give myself more time and go to the trade day plus one of the public sessions. But it was another wonderful opportunity to meet and talk to brewers and see Kenichi Ohashi live! Looking forward to WABI 2018.