The rise and rise of non-alcoholic everything, including sake 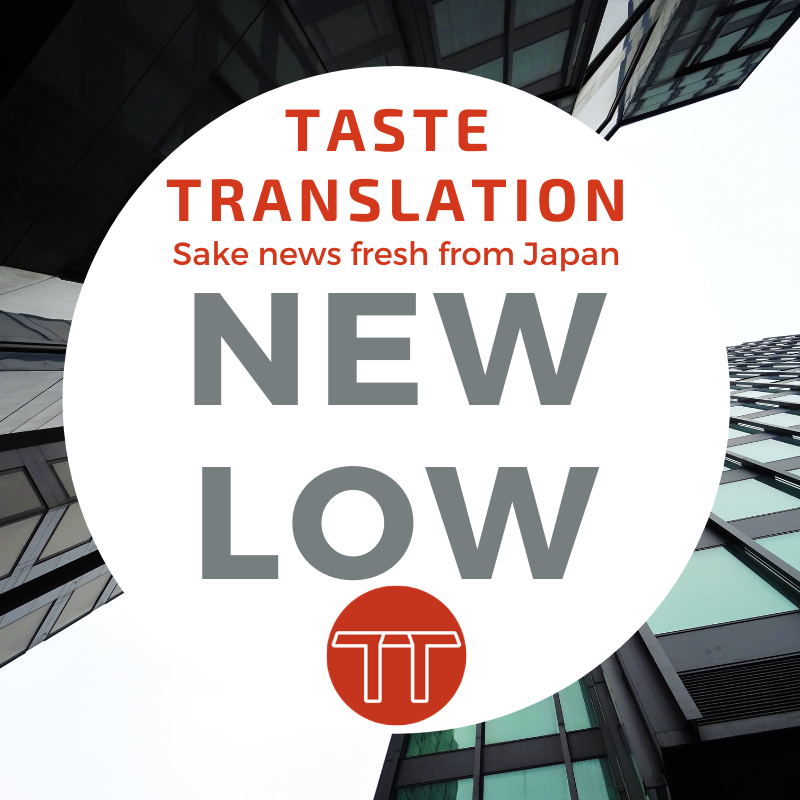 Excite News carries an article by Takamasa Kujirai charting the popularity and evolution of non-alcoholic drinks. A lot of the article is about beer and chūhai, but I still found it worth translating to get an idea of what wider concerns the sake industry is – or is not – responding to.

Once a tiny niche category, non-alcoholic versions of alcoholic drinks are so popular in Japan that they have their own section in supermarkets and convenience stores. The first non-alcoholic beer released about 10 years ago may have had an uncertain reception, but the category is now here to stay with the emergence of no-alcohol bars.

Previously seen as a last resort in situations where you couldn’t drink alcohol, alcohol-free drinks are now actively sought out on all occasions by a certain type of ‘drinker’. They’re seen as a choice instead of an obligation. A serious drink-driving accident widely reported across Japan in 2006 prompted the development of the non-alcoholic beer Kirin Free, released to market in 2009 to meet social demand. It also set the non-alcoholic industry standard of 0.00% alcohol.

Until Kirin Free was developed, non-alcoholic beers were brewed like normal beers with yeast added to wort for fermentation. Alcohol was produced at the fermentation stage, but suppressed to create a non-alcoholic product. Today, most non-alcoholic drinks are produced without fermentation, using aromas and flavourings to reproduce the smell and taste of beer.

Takuya Hayashi of Kirin Beer’s Non-Alcholic Drinks Division comments that the aroma and flavour compounds of beer are transformed by fermentation, but as fermentation inevitably produces alcohol they had to recreate beer-like flavours and aromas through blending. One drink that helped them in their search was the chūhai [shōchū highball], made of a blend of juice and flavourings.

The non-alcoholic market has been growing year on year, and exploded between 2018 and 2019 with growth of 101.7%. Kirin alone sold 40,000 kilolitres in 2019. A breakdown of sales shows 85% are for at-home consumption, and although sales to businesses have suffered this year because of the pandemic that loss has been made up to some extent by increased consumption at home, which is expected to continue.

Other brewers saw the success of Kirin Free and were quick to follow. They invested heavily in development, further expanding the non-alcoholic market, particularly with the release of Asahi Beer’s Dry Zero in 2012 which resembled beer more closely than previous “double zero” products. [0.00% alcohol and allegedly 0 calories.]

Kōta Yoshioka of Asahi Beer commented that other processes use unfermented wort, which left off-flavours and a strange kind of sweetness. They turned that thinking on its head and stopped using wort altogether. They saw pros and cons to the method internally, but it delivered a drinkable product with hoppy aromas and a clean aftertaste, which was supplemented with dietary fibre.

After repeated experimentation, taste tests showed that about half of people tasting Dry Zero thought it was normal beer. They had replicated the taste of beer and wiped out the sense of otherness that previously held non-alcoholic beer back. Yoshioka commented that he personally thought the flavour could be improved even further, particularly the grain-like aspects. If only the aroma was grain-like, the overall balance wouldn’t be good enough and it would taste strange. But he acknowledged it’s a difficult problem to solve.

Their rivals Kirin were hard at work trying to improve flavour. Hayashi admitted that the flavour on release wasn’t exactly great, but gradual improvements changed that. However, it’s still a work in progress. His previous development work had never required analysing beer and figuring out which components make it… beer. But the development of non-alcoholic beer led him to exactly that question. The more he looked into it the more he found, and gradually they managed to make the product tastier.

Kirin’s Karada Free beer-flavoured drink claimed to reduce abdominal fat, and was aimed at middle-aged drinkers unhappy with their waistline.

Above and beyond better flavour, an increasing wave of health-consciousness was also responsible for expanding the market. Many non-alcoholic beverage drinkers were in their 40s or 50s and becoming more concerned about their health, for example after being told at routine health checks that their liver function numbers were high. Many allegedly started swapping their last drink of the night out for a non-alcoholic beer.

Yoshioka is taken aback that non-alcoholic beer accounts for about 90% of current canned beer sales for home consumption. He never imagined that health-consciousness would become so deep-seated in the home environment. Beer-like drinks with zero carbohydrates or zero purines really took off, and alcohol-free drinks did as well. On top of that, as they were non-alcoholic the drinks were also recognised as “designated health foods” or “labelled functional foods”. Every company increased their range of non-alcoholic functional drinks from 2015, with abdominal fat being a particularly popular target.

The call for restraint during the pandemic seems to have increased demand even further, comments Shuichi Seto of the Food Industry Times [食品産業新聞, shokuhin sangyō shinbun].

Yoshioka of Asahi notes that in 2016-2017 every company pursued flavour, but in the first half of this year the health and functional products made up 26% of the non-alcoholic market compared to 6% last year – a massive shift thought to be due to the pandemic. Products with an added bonus are even more appealing, and now expected by customers. Kirin announced that a compound responsible for bitterness in aged hops improves cognitive function. Hayashi adds that aged hops work to reduce abdominal fat but are thought to have many other potential functions as well. And they are researching other raw ingredients too, to cater to the future demands of a function-hungry market.

There are also high hopes for future development of non-alcoholic chūhai and cocktails, especially as fruit-based chūhai are so close to fruit juice they risk losing their association with alcohol. Hayashi from Kirin describes their flavour profile as sweetness and acidity, followed by a throat-scorching burst. The main target for chūhai are male consumers. Asahi’s Yoshioka muses that the highball taste of their Style Balance is easy to remember and so popular with men. It’s difficult to make a non-alcoholic highball at a bar, which is to their advantage. Unlike other very sweet chūhai, Style Balance Rich Aroma Highball Taste is also a functional food with special properties shown on the label.

And this expansion of the non-alcoholic market is not restricted to beer and chūhai, it’s also a growing sector for sake. Gekkeikan’s Special Free, released in 2019, was far better received than their previous non-alcoholic sake. Gekkeikan’s Tatsuya Muratsubaki put it down to creating a new taste for daiginjō. He notes that it also attracted an unexpected segment – younger drinkers. Their previous efforts were too close to traditional sake and so unappealing to the younger segment for the same reasons as standard sake. This time they went in the opposite direction and used seasonings such as wasabi and shiso to create something daiginjō-like that was also easy to drink.

Unfortunately, chasing the fruitiness of a daiginjō left them with a flavour more like a sports drink. They had to keep combining amino acids to recreate sake’s sweetness, acidity and depth alongside spices and condiments to balance the aroma and flavour.

[The article shows a spider diagram comparing the flavour profile of Gekkeikan Special Free to daiginjō: with daiginjō as the base (0 on all axes) Special Free is -2 complexity, -6 smoothness/alcohol, -2 richness, 0 depth, +6 (short) finish, and +2 sweetness.]

They’re putting a lot of effort into the taste of this non-alcoholic sake but it is still a work in progress. Muratsubaki notes that although sake is traditionally drunk with meals, they haven’t got that far. Their first priority is meeting the needs of people who want to refrain from drinking sake, but they also hope their attempts will get younger people interested.

Seto of Food Industry Times notes that the rising trends are changes in flavour, health-consciousness and young people turning to non-alcoholic drinks. He points out that overseas trends are slow to arrive in Japan, where big drinks companies like Heineken and Guinness are already putting their full weight behind products. Consumers are holding back from alcohol consumption, especially younger people who increasingly see being drunk as uncool.

The UK saw the launch of the world’s first non-alcoholic spirit, Seedlip, in 2016 – around the same time as a surge of popularity for ‘mocktails’. New York’s first non-alcoholic bar opened in 2019, which caused a stir in Japan. People contemplating not drinking are referred to as “sober-curious” in the US, a phenomenon led by the younger generations.

[The original article shows a graph with percentage of men who almost never drink alcohol:

Data from the National Health and Nutrition Survey of the Ministry of Health Labour and Welfare.]

Although this turning away from alcohol is generally seen as happening among young people, the 2018 survey results show that the percentage of respondents replying “almost never” or “never/can’t” to the question of how frequently they drink is increasing in every age bracket. Surprisingly, the largest increase was in those in their 30s and 40s, where the increase was around 15%.

Veteran bartender Eiji Miyasawa currently works at Japan’s first non-alcoholic/low-alcohol bar, the Low-Non-Bar in Tokyo’s Yaesu district, opened in March 2020. He comments that many of his younger customers question the merit of getting drunk, especially as they don’t need the boost alcohol can provide to talk and have a good time. He adds that the non-alcoholic scene is much richer overseas, but hasn’t taken off in Japan because of ingredients. However, Japan’s first non-alcoholic spirit NEMA, launched in 2018, has made even bars interested in non-alcoholic drinks.

It was followed in May 2020 by NON – The Non-Al Spirits, a gin-flavoured non-alcoholic drink. June saw the opening of the completely non-alcoholic bar 0% in Roppongi, and in August Hirubi [昼ビ, midday/lunch beer] a new “craft beer taste drink” was launched by a lightweight former advertising agent to let consumers safely enjoy the sense of hedonism that comes from drinking beer from lunchtime onwards.

Miyasawa adds that he also sees demand for non-alcoholic drinks at tourist spots, for example a strong response at affiliated locations in Karuizawa. When the main point is travel, people don’t want to get drunk. Non-alcoholic drinks are also popular at cycling events, and well suited to outdoor activities – something manufacturers have already noted, according to Hayashi who reports Kirin has already sent samples out to campsites and shown drinking during sports in their advertising. They expected their non-alcoholic products to be taken up more quickly in work and outdoor settings.