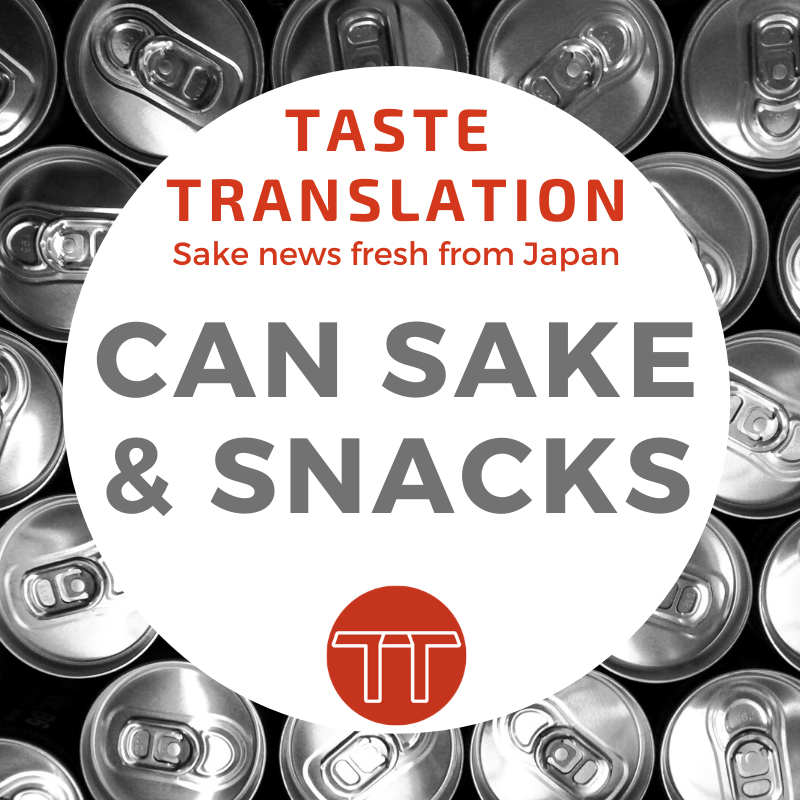 I’ve previously joked “you can with a can”, and this is that squared! Walker Plus reports on what could be the most convenient of pairings, canned sake with other things in cans. And not just any sake, the familiar yellow can from Kikusui with their Funaguchi Ichiban Shibori – but the pairings will presumably work with any similar sake (nama genshu).

Anti-coronavirus measures have led to a significant decrease in chances to eat out and a corresponding increase in demand for drinking at home – although that increased purchasing is not necessarily evenly spread across the wide spectrum of sake. Very popular in Japan, Funagchi has sold over 300 million units and been declared the best sake in convenience stores.  [Kikusui’s can sake can be well described as cheap and cheerful, in a good way.]

Kikusui launched a campaign to suggest similarly canned snacks to go with their sake, kicking off with an online tasting session to showcase possible pairings.

Their partner for the event and campaign was K&K Kantsuma, part of the Kokubun group, who produce a range of canned products. The companies are asking consumers to vote online and chose which combination of cheerful yellow can sake and canned food is the best. Kantsuma sell around 70 types of canned food, and have their own “Dr. Kanzume” [缶詰, canned food], Hayato Kurokawa, who has eaten over 50,000 kinds of things in cans.

Kurokawa was featured as a guest for the online tasting, and prefaced his contributions by saying that almost any of their canned food would go with Funaguchi because it’s higher in sweetness, acidity and positive rice-derived bitterness than other sake, and particularly high in umami. This richness of flavour means it goes well with very strong flavours like smoked foods or spiciness that sake usually can’t stand up to – particularly things that end up in cans.

Shōichi Sakikawa, from Kikusui’s sales department, comments that many canned foods are oily or intensely flavoured. Kikusui clocks in at an impressive 19% alcohol which he believes makes it particularly suited to pair with intense or fatty foods.

The event showed them pairing the canned food and sake. Kurokawa commented that the smell of charcoal bursts from the can of Kagoshima chicken as soon as it’s opened, and although it’s something most people pair with shochu Funaguchi’s flavours are strong enough to stand up to it and make an enjoyable match with the smoky chicken.

Japan-caught sardines with habanero peppers was Kurokawa’s most speculative choice, and when Sakikawa tried it he remarked that Funaguchi felt like it was washing away the oil and cleaning the palate, making them an unexpectedly delicious combination.

The campaign runs from 25 June until 7 August, and 20 people who vote for their favourite pairing on a dedicated site will win a set of 10 cans of Funaguchi and 10 canned foods from Kantsuma.

← How pairing could help restaurant recovery More ways to spice up your sake, from a Niigata brewery →