Sake exports continue to rise, but why? 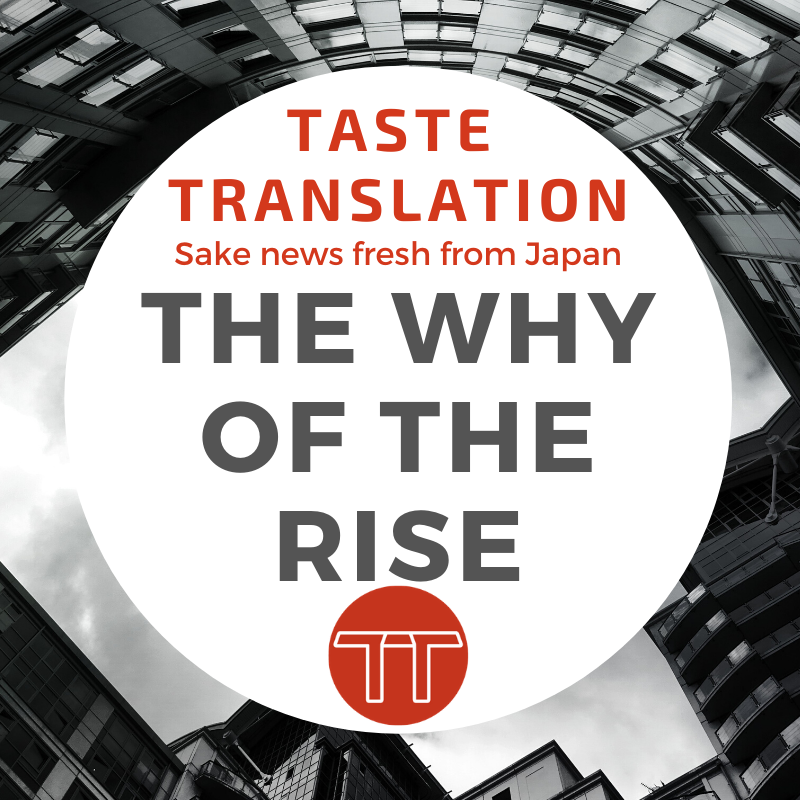 In the midst of the New Year party season, also prime time for fresh sake, Livedoor News looks at how the export market for sake has tripled in value in the last 10 years and, more importantly, why.

Total sake consumption (reckoned by tax revenue) is down to less than 1/3 of its peak, partly due to Japan’s decreasing population, so attention is now focused on exports. 2018 set a new export record for the ninth year in a row. Journalist Minoru Yamada decided to dig into the reasons behind sake’s growing popularity abroad.

Domestic sake production peaked in 1973 (Showa 48) at 1.77 million kilolitres, dropping just 530,000 kilolitres in2017 (Heisei 29) (according to National Tax Agency annual statistics). The most notable drop is for futsūshu (普通酒, table sake), such as sake sold in cartons in supermarkets.

In stark contrast, exports couldn’t be better. They were valued at around JPY 22.2 billion in 2018, an increase of 119% on the previous year and almost triple the value of JPY 7.7 billion in 2008. Volume of exports has also increased, more than doubling from 12,151 kilolitres in 2008 to 25,747 kilolitres in 2018 – the equivalent of about 14.3 million isshobin (一升瓶, 1.8 L bottles). Based on trade statistics from the Ministry of Finance, both value and volume have set new records every year for the past nine years.

Looking at exports by country, the US has a clear lead but most other positions are taken up by Asian nations and the greatest growth was seen in Vietnam and Taiwan. [Due to recent tensions with Korea, their figure for 2019 may drop.]

However, if you look at exports by unit price the number one country in that list doesn’t even appear in this top 10. Macau pays an average of JPY 3,959 per litre for imported sake. Hong Kong takes second place with JPY 1,800, followed by Singapore with JPY 1,372. Although the US dominates the chart for total value of imports, it’s only in 6th place for unit price with JPY 1,061. China comes in at number 10 with a unit price of just JPY 865. Countries paying higher unit prices are importing “premium” grades like junmai ginjō, and in Macau casinos may be responsible for the high unit prices paid.

So exports are doing well, but why? The article identifies two reasons: the increased popularity of Japanese food (after it was declared a UNESCO intangible heritage in 2013) and active efforts to promote sake.

The MAFF started certifying overseas restaurants and retailers that actively use or sell Japanese products as “Japanese Food Supporters” in 2016, and by September 2019 there were 4,449 businesses certified (including 3,129 bars and restaurants). That gives you an idea of the number of places serving both Japanese food and alcoholic drinks.

Domestic and international promotional activities have also contributed to sake’s export growth. The Salon du Sake 2019 was held in Paris in October 2019, bringing together Japanese sake brewers, French and European sake fans, and professionals from the food and drink industries. Officers from the National Tax Agency (NTA) held a workshop at the event, explaining how sake is brewed and presenting the concept of umami to an audience of foreign buyers who listened while trying food pairings such as aged sake with raw ham. The three-day event was attended by 5,129 people.

November 2019 saw the third “Japan’s Food” Export Fair in Makuhari Messe in Chiba Prefecture, with around 700 exhibitors exporting food and drink and 17,000 attendees from all over the world. It was an opportunity to sell to foreign buyers without having to go abroad, and export companies did all they could to capture the interest of attendees. Sake breweries large and small were there, with plenty of tiny kura explaining sake and offering tastings to the visitors and buyers.

There’s no question that these promotional activities inside and outside Japan have boosted sake’s popularity.

Inbound tourism, which is still on the rise, has also had an effect. Over 30 million visitors come to Japan every year, encountering Japanese culture and buying Japanese products to take home as souvenirs.

According to a survey of foreign tourists coming to Japan and foreign residents by the Japan Tourism Agency (JTA, conducted December 2017 – January 2018, 1,064 valid responses), 85.4% consumed Japanese alcoholic beverages while in the country and 66.6% drank sake. 67.4% bought alcohol as a souvenir, and of those 61.6% chose sake.

Consumption and purchase of sake far exceeded that of any other alcoholic drink, and even after returning home tourists who had been exposed to sake during their trip were likely to order it at Japanese restaurants or buy it from specialist stores.

Sakagura tourism has also attracted attention in recent years. Tourists can visit sake breweries and meet brewers, enjoying the local area and its products, and more and more foreign tourists are joining such tours to visit regional breweries and experience their local traditions. Kashima in Saga Prefecture started the trend with its Kashima Sakagura Tourism project, and the idea soon spread across the country. Purchases of sake by inbound tourists, where the sake is taken out of the country, were exempted from liquor tax in 2017, and more and more breweries have staff who can speak foreign languages.

Local governments are also actively engaging in promotion and developing sales. Fukushima has seen its sake exports rise continuously between 2012 and 2018, when it shipped 188 kilolitres in a 5% increase over the previous year. The quantity may not be large, but the prefectural government has targeted their largest overseas market, the USA (44% of total prefectural exports), setting up a Fukushima sake corner in two wine shops in New York in August 2018. The two shops stock around 60 lines of sake and hold monthly tastings, with monthly sales of around 272 bottles in 2018 increasing to 407 per month in 2019.

The Fukushima Brewers Association created the “Fukushima Sake Story” site, complete with promotional videos and information on shops stocking Fukushima sake in New York, emphasising their seven consecutive wins at the national new sake appraisal competition. The well-produced NASAKE series of videos follow a young Japanese woman living abroad who meets an American man whose father made bourbon, after which she returns to Japan to try to brew sake herself. A version with English subtitles for overseas audiences has been viewed over 3 million times between all three episodes.

The NTA, which also promotes sake exports, held five exploratory meetings on a global brand strategy for sake in 2019 and issued an interim report at the end of the year. The NTA plans to join forces with the MAFF and JTA to further boost exports.

So even as domestic consumption continues to decline, kuramoto all over the country have their eyes on the export market as sake enchants even more people overseas.

← Should you keep your sake below zero? Nada brewery draws attention with art label project →