I had read about the effect of drinking vessels during the WSET Level 3 course, but all the tasting during the classroom sessions was from their ISO glasses so although we experienced a lot of variety (including the sake sakes warm and cold) we never tested the effect of what you were drinking from. I got into conversation on Twitter with sake enthusiast and fledgling kurabito Origin Sake (Origin Sake, @originsakeblog) and interpreter, translator and promoter Matthew Headland of Connect Niigata (@connectniigata) about how the drinking vessel affects the sake, after which Origin Sake did a test with four vessels: a wine glass, a Bizen-yaki earthenware cup, a cedar masu box and a sake glass.

It was a relief when he pronounced the wine glass and earthenware cup as the best, as I don’t have either a masu box or a sake glass at the moment! (They are on the list…) I tried first with Kikusui Junmai, a refreshing, not-too-delicate sake stocked by Shinwazen. I took it out of the fridge, let it warm up a little so it was still chilled but not so cold, and then poured into both the WSET ISO glass and my glazed cup.

ISO glass: The sake made quite a strong impression out of the wine glass, with a definite creamy edge. There was umami and alcohol, some rice/koji flavours, and also a hint of lemon. Overall it was fairly light, delicate and mild.

Glazed cup: The same sake certainly felt different from the glazed cup. It was smoother, and the rice/koji flavour was more dominant. The alcohol and creaminess were still there, but not nearly as noticeable. The overall impression was milder and to be honest, I preferred it to the glass at least for this sake.

One thing I really noticed was how the glass and glazed cup brought the sake onto the tongue – the glass is slightly tulip-shaped (all the better to catch those aromas) and has a thin lip which brings the sake onto the front and centre of the tongue. The cup had a broader lip and larger aperture, and distributed the sake over the centre and sides of the tongue, which will affect the taste.

Looking back at Origin Sake’s post, I didn’t stop to smell the aromas! I’ll keep that in mind for next time. I also seem to have had the opposite impression than he did – I felt the flavours were more intense from the wine glass and mellower from the cup. 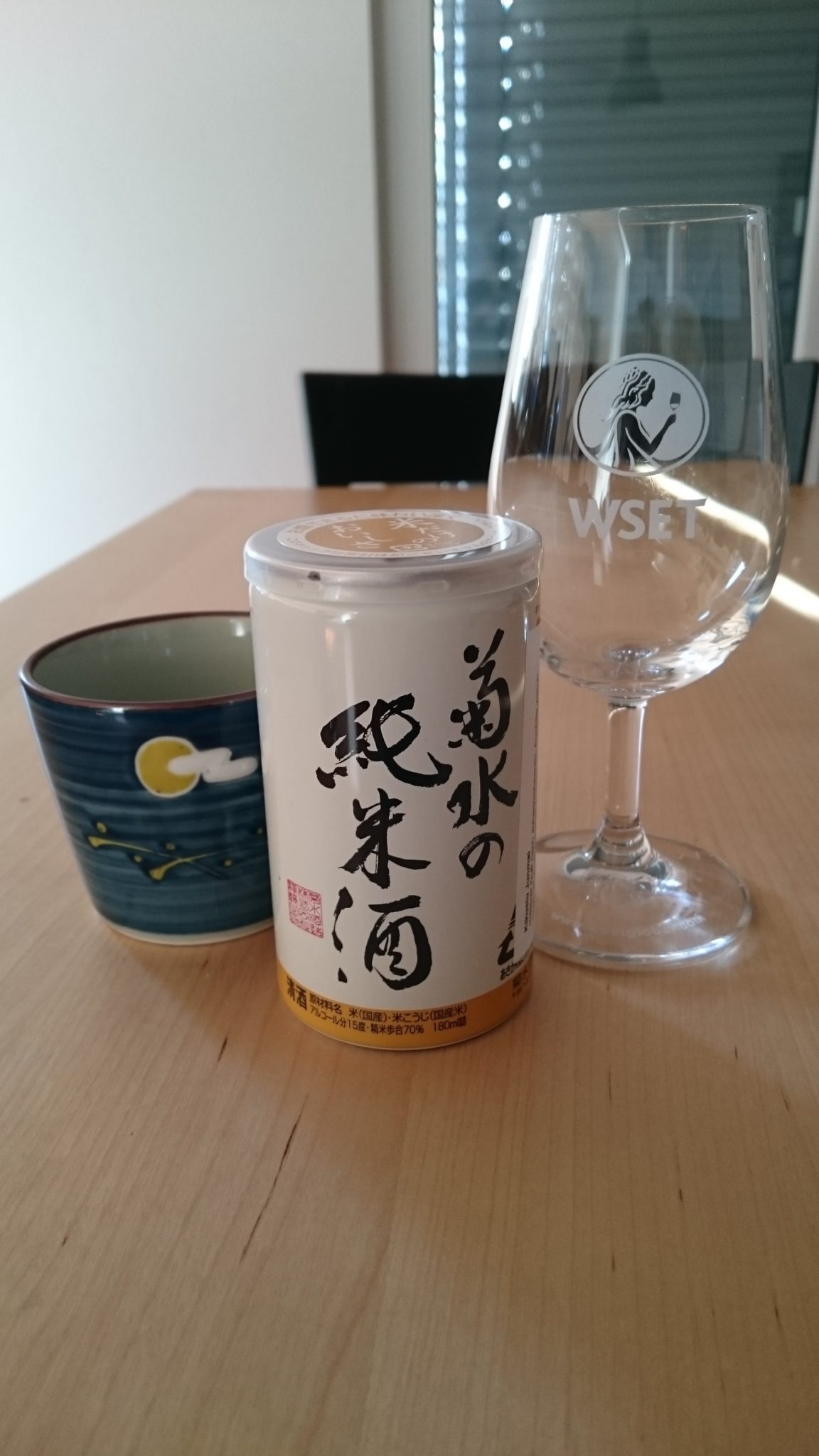 The second sake I tried this experiment with was a lovely junmai daiginjo that Markus at Shinwazen served during the impromptu sake tasting he held for me just before the WSET course – Kotsuizumi Rojo-hana-ari Kurobotan. I adore the bottle and the design, although the smaller 300 ml bottle is transparent glass with a sticker and actually quite hard to see. I decided to taste in the opposite order this time, cup then glass.

Glazed cup: The sake was juicy, dry and fruity with some lactic and rice notes, and again I noticed how the cup directed the sake to wash all over the tongue, hitting the centre, sides and back. Like the junmai, I felt that the sake was a little more savoury from the cup. It had a slight bitterness (which we had noticed before when it was chilled), and a gentle but lingering finish with a hint of umami.

ISO glass: From the glass, the sake was fruity and sharp, but still relatively dry. There were less of the lactic and rice notes, and again the glass directed the liquid onto the front and centre of the tongue, not onto the sides. The sake tasted a bit more delicate, less bitter, and with a more juicy finish that didn’t linger as long as it did from the cup.

So that was it for that experiment – I need to go shopping again as that was the last bottle of sake I had in the fridge! But while I had it there, and there was still some chocolate left over from our Easter tasting session… it was sake and chocolate time!