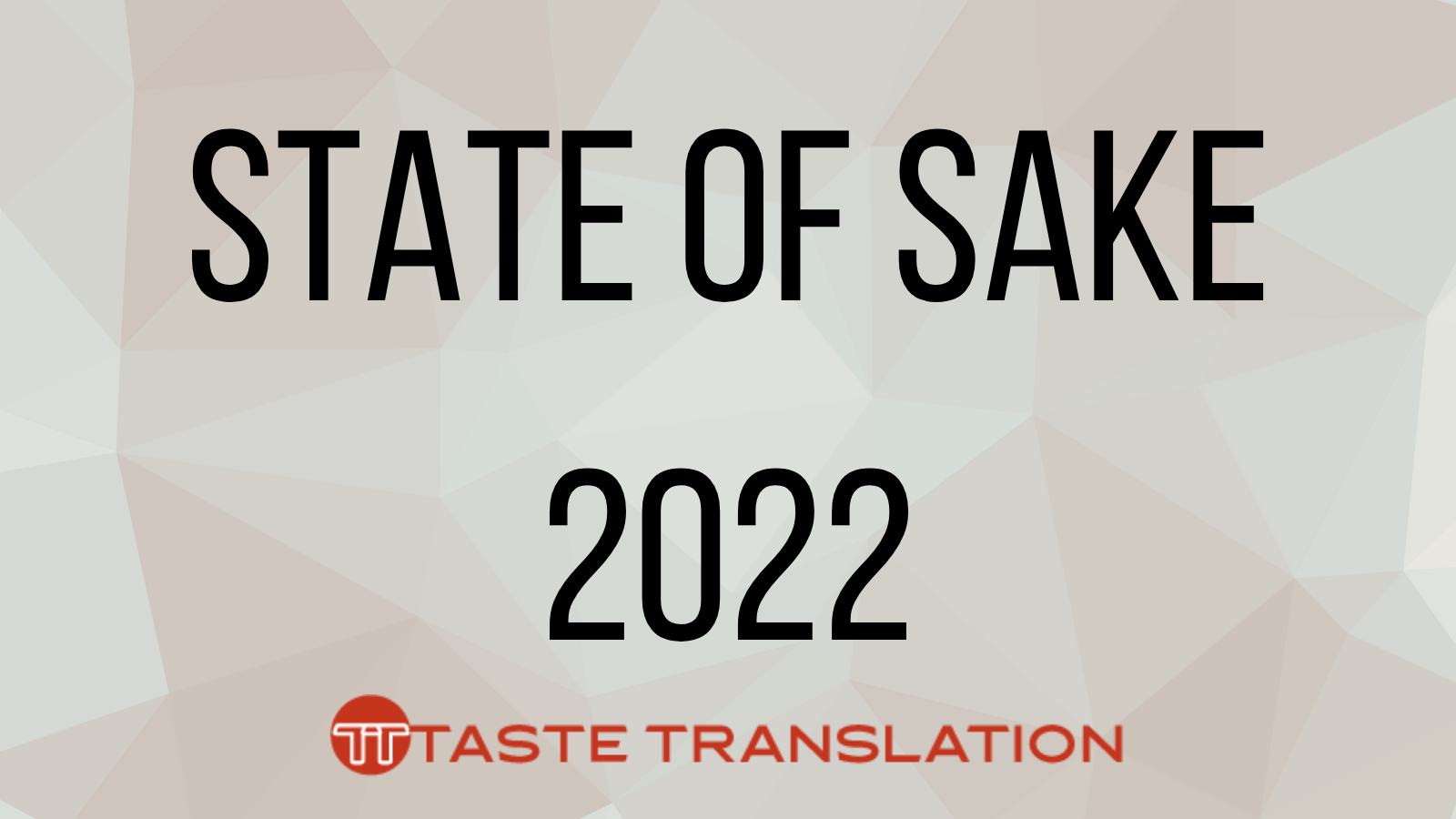 For historical reasons (including using alcohol taxes to fund military action) alcohol production in Japan is overseen by the Japanese National Tax Agency (NTA). As well as collecting taxes, they also provide a host of services and subsidies for companies making sake, shōchū, awamori, liqueurs, wine, beer and other drinks, and collate and publish statistics on production, consumption and export of alcohol produced in Japan. Their latest comprehensive report on the Japanese drinks industry, Sake no Shiori, was issued in March 2022. (162 page PDF, Japanese)

There’s a ton of interesting information in here, and for now I’m going to concentrate on covering the 17-page Preface (which will take 2 or probably 3 posts).

History of alcohol tax and challenges facing the industry

The preface acknowledges alcoholic drinks as an important source of tax revenue,which links it to the NTA’s mission of promoting Japanese drinks at home and abroad. Although alcohol tax was an important revenue stream for Japan in the Meiji Era, over time other taxes have increased and in 2020 alcohol tax contributed just JPY 1.1 trillion, or 1.7% of total tax revenue. Despite making up such a small proportion of tax revenue, alcohol tax is still seen as important because the amount remains very stable.

The NTA is also responsible for issuing brewing licenses, which simplify alcohol tax collection by restricting the number of brewers. (Home brewing is illegal in Japan, and sake licenses have a relatively high minimum production requirement. As domestic demand for sake has fallen, new licences are currently issued only for sake that will be exported. There are some licenses with lower production requirements, mainly linked to special local products and craft-scale beer brewing.)

The preface goes on to list some of the challenges facing the alcoholic drinks industry: population decline in Japan, more people concerned for their health, and new lifestyles that do not include alcohol consumption. The NTA is also responsible for protecting the public from the impact of alcohol consumption, including preventing underage drinking (legal age in Japan is 20) and promoting recycling of drinks containers.

The NTA forecasts that the domestic market will continue to shrink in the medium to long term, due to factors such as demographic changes (declining bith rate and ageing population), customers looking for lower prices after a period of economic growth, and diversification of consumer lifestyles and preferences. Supporting graphs show that although the adult/working age population has remained relatively stable over the last two decades, alcohol consumption per adult per year has dropped from a peak of 101.8 l in 1992 to 75 l in 2020. (Statistics do not include Okinawa.)

Liquor tax revenue peaked in 1999, with figures in 2020 down to around 80% of that peak. One reason for the decline is major changes in recent years in the breakdown of types alcohol being taxed, including a shift from beer to inexpensive sparkling drinks, chūhai and “new genre”/new types of low malt beer-like drinks.

The taxable volume of sake shipped from breweries peaked in 1973 at 1.77 million kilolitres, dropping to just 0.41 million kilolitres in 2020. Breaking down volumes by type, the amount of futsūshu produced fell sharply, but other types such as junmai and junmai ginjō/daiginjō rose from 81,000 kilolitres in 2010 to 98,000 kilolitres in BY 2020, an increase of 20%. The proportion of tax revenue from all “premium” types (特定名称酒, tokutei meisho shu) was 34% in BY2020, with junmai and junmai ginjō/daiginjō accounting for 23%. Unit price has also been increasing since 2012, thought to reflect increased demand for products with higher added value.

A breakdown of sake unit value by export destination shows Macao well in the lead with JPY 5,069/l, folowed by Hong Kong with JPY 2,870/l and Singapore with JPY 1,960/l. The only Euroepan countries in the list are the UK at number six with average unit price of JPY 1,119/l and France at number 7 with JPY 1,117/l. The average sake unit price in the EU and UK combined was JPY 747/l, and JPY 1,087/l in the USA. (Based on trade statistics from the Japanese Ministry of Finance.)

The report then looks at a 2018 WHO survey on global alcohol consumption, which revealed large differences in consumption ranging from 0.6 l pure alcohol in the Eastern Mediterranean to 9.8 l in Europe (in 2016, for over-15s). The types of alcohol consumed also varied widely by region. Men drank more than women in all regions, although the gap was wider in Europe than in the Eastern Mediterranean.

Effect of the pandemic

Alcohol consumption was lower in 2021 due to the pandemic, same as in 2020. The value of exports exceeded JPY 100 billion in 2021, marking a new record for the 10th year in a row, showing a continuation in shifts in consumer preferences from 2020.

Consumption at home and outside the home combined fell by 10.2% compared to 2020. (Figures from the Ministry of Finance household survey, average spent per household for housholds of 2 or more people.)

Licenses for alcohol production and sale

A license is required to proudce any one type of alcohol, at any particular site. (So a company with more than one site or producing more than one type of alcohol needs multiple licenses). At the end of 2020, there were 3,574 sites licensed for production of any type of alcohol. The number of sites producing alcohol has been in long-term decline, but that trend has reversed in recent years in part due to the popularity of fruit-based drinks, especially Japanese wine.

Compared to the number at the end of 2010, there were more sites licensed to produce wine, beer and “other” drinks in 2020. The increase in the “other” category was largely driven by brewed alchol (doburoku, an old farmhouse-style sake style from before home brewing was outlawed) and liquers made from local specialty products, produced in smaller volumes through exemptions provided by the Law on Special Zones for Structural Reform (構造改革特別区域法, kōzō kaikaku tokubetsu kuiki hō).

A license is also required to sell alcohol, one per site and separate licenses for wholesale and retail. There were 4,940 sites with wholesale licenses and 166,858 sites with retail licenses at the end of 2020 (for all types of alcohol). Gradual easing of requirements for adjusting supply and demand led to an increase in retail licenses from 2007, but the number has declined in recent years. The easing also allowed other retail outlets (supermarkets, convenience stores, “home centers”/home improvement stores, drugstores, etc.) to sell alcohol, resulting in a sharp decrease in the proportion of specialist alcohol retailers (down from 69.8% in 2001 to 49.3% in 2005 and to 23.4% in 2019) and producing large-scale changes in the structure of the alcohol retail industry.

And that covers part 1 of the Preface of the 2022 Sake no Shiori! I am grateful to the NTA for allowing their content to be reproduced/used with credit and a link to the original material. (The translation is mine, not to be used or reproduced without written permission.)