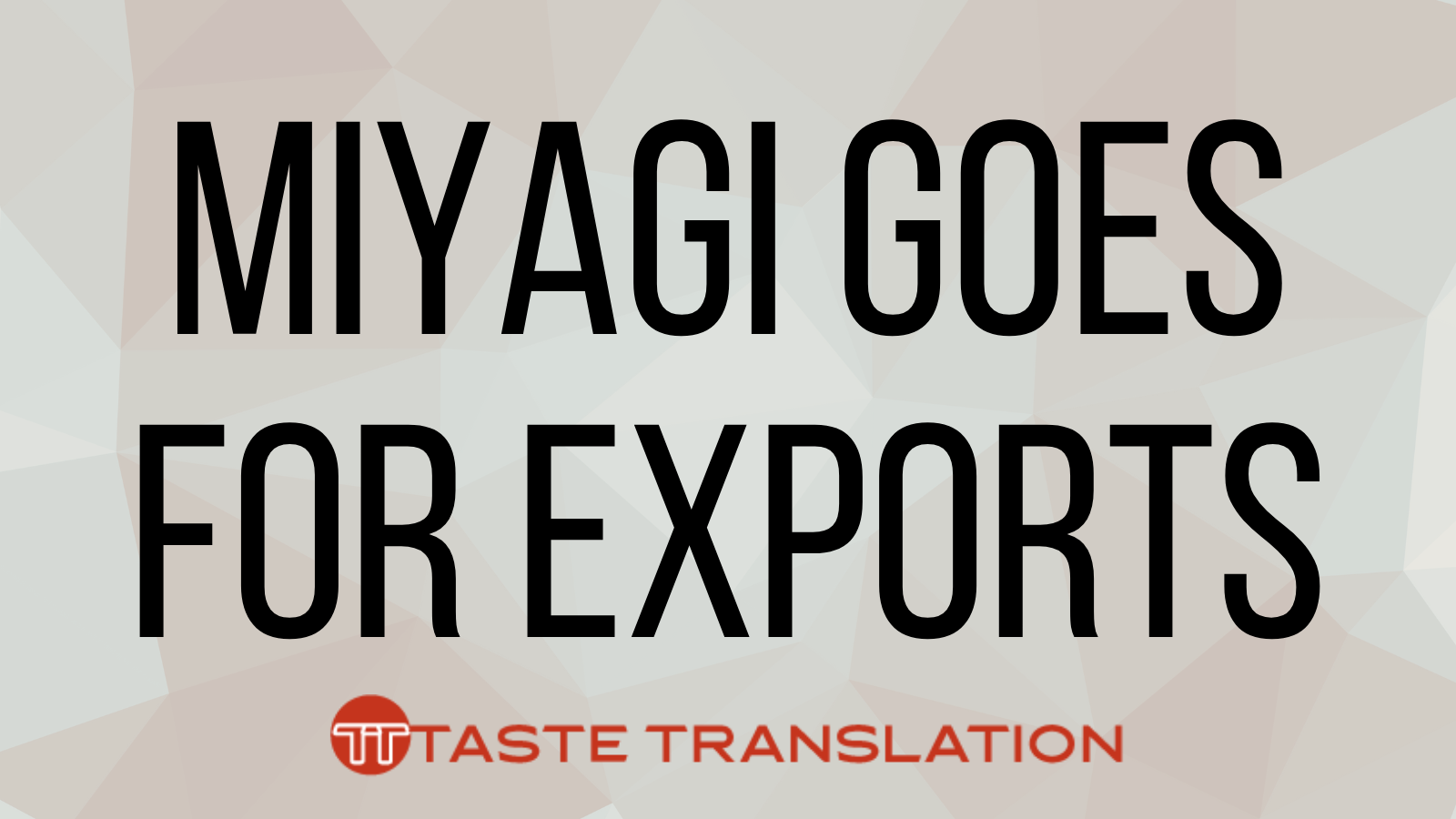 There’s no shortage of originality from breweries when it comes to promoting their sake, so it’s also interesting to see what is being done on the prefectural level as local authorities try to support exports.

I chose this article in the Yomiuri Shinbun because it features a labelling/grouping system I haven’t seen before, combined with the direct-to-potential-buyer approach often adopted by JETRO.

The article opens by recognising the increased worldwide recognition of nihonshu as “sake”, and that the seemingly unstoppable fall in domestic demand is pushing sake makers to expand their overseas export markets.

A “Miyagi Styles” buyer event held at a German restaurant in February 2022 featured a table full of sake – but all bottles had the same label. The names of the sake were concealed, allowing them to be displayed as a single “Miyagi brand”, and they were placed in groups numbered 1 to 5 based on strength of aroma and flavour.

Prospective buyers tried the sake with local specialties such as carpaccio and sausage, and rated crisp, moderately dry sake over ones similar to white wine. [I always think of carpaccio as Italian, but it could be a Japanese way of referring to sliced dried meat/charcuterie, which is very common in Germany.] Then business meetings between potential buyers and brewers were held immediately after the tasting.

Miyagi Prefecture started the project in FY2021, together with eight sake breweries and one logistics company, aiming to give unified support for shipping routes and overseas development to each brewery. Similar initiatives were very successful in Hong Kong, and the prefecture plans to use them in FY2022 as well for overseas PR. Takahiro Oshino, assistant director of the Prefectural International Business Promotion Office, said the event let them see what type of sake was preferred in which areas, and that he wanted to continue to communicate the diversity of Miyagi sake.

The article also touches on the fact that the last 12 years have seen successive increases in sake exports from Japan, with exports in 2021 1.6 times higher than in 2020. The pandemic has meant more people spending more time at home, and also becoming more health-conscious, which has in turn increased worldwide interest in Japanese food and demand for the sake that goes with it.

Some sake breweries have been exporting for over 20 years, but others who did not start early can find it hard to break in to certain established export routes. So the prefecture is trying to increase recognition for its “Miyagi Brand” to push its export strategy.

The brewery focuses on traditional, manual production, including reviving the use of the time-consuming kimoto yeast starter. In 2003 they became a part of the GLION group, a car dealership based in Kobe, and resolved to use the group’s expertise in their export activities.

And it was through the GLION group that Tanaka Shuzō met Chartier. Although the sake industry had moved away from blending, they found that the aromas of multiple sake came together to produce a pleasingly complex result which gained recognition overseas as a sake taking the place of wine. The blended sake is currently served in Michelin-starred restaurants in 22 countries and regions.

Tanaka Shuzō also noted the increase in people adopting a vegan lifestyle, and last year were the first in Miyagi Prefecture to acquire vegan certification, covering seven of their labels made with only rice and kōji. [Sake also contains water, but it’s usually not listed as an ingredient on the label.] Their exports are increasing mainly in Asia, and they recently won out over 100 competitors to secure a contract with Australia’s largest drinks retail group. President Kunihiko Nagai commented that preferences for types of sake differed by country, and that he wanted to make the world aware of their long-established culture and the story of their history, and make Manatsuru their choice out when faced with a large number of sake labels.

I wasn’t able to confirm the two names in the article, and the Tanaka Shuzō site also lists someone else as president, so not sure what is going on there.

I like this approach of grouping sake in different ways (and you could do many variations) and then offering it to local potential buyers and seeing what suits each region’s preferences and food. Not sure how it would translate into exports, although if the logistics works then Miyagi Prefecture itself could become an exporter?