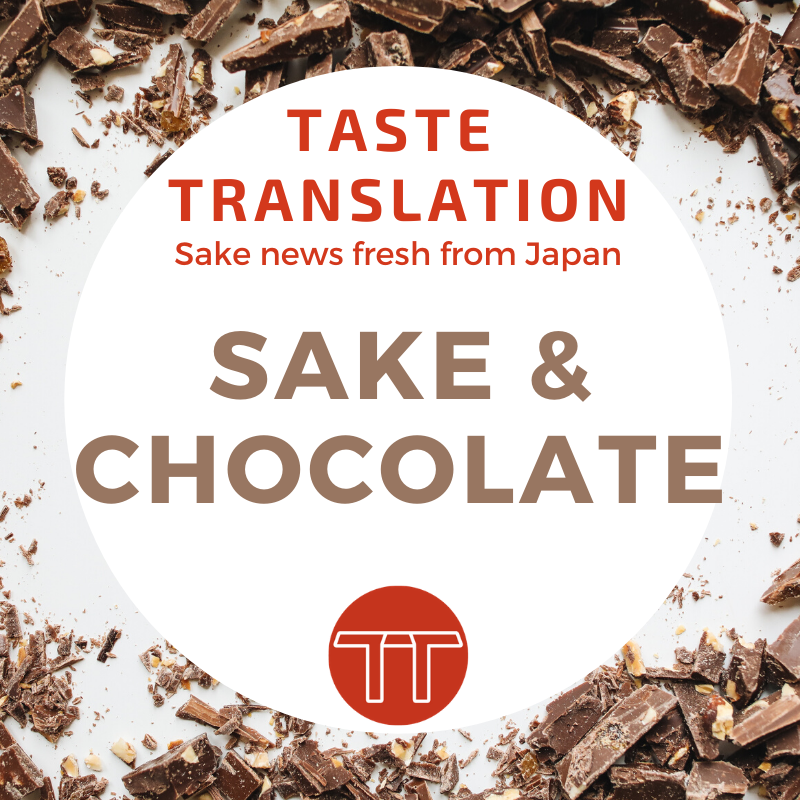 Sake pairing expert Marie Chiba, owner of GEM by Moto, was hosted on an Instagram Live on 24 June 2020 by Takatsugu Yamashita, co-founder of Minimal bean to bar chocolate in Tokyo.

Takatsugu started off interviewing Marie, asking her about how she got into the niche she’s in now, before trying out two pairings.

Both sake used were very unusual, one a doburoku (farmhouse-style unfiltered sake) and one a sparkling sake made with a rare yeast that produces a pink pigment and results in a rose-coloured sake.

The first pairing used Minimal’s 65% Seasonal Nicaragua bar (Japanese product page), made with cacao from the northern high-altitude Pancasan region. Tasting notes on the site say the bar tastes of candied nuts with a rich sweetness like chestnut honey.

It was paired with the rose sake, made by Hachinohe Shuzō. Their main label is Mutsu Hassen, but this slightly effervescent sake – Shuwawa (fizzing/fizzy) Tart Rose – falls under their experimental Mixseed Series launched to celebrate their young tōji and kurabito getting state qualifications.

Takatsugu’s first impression was high citric acidity, which Marie explained was produced by using white instead of yellow kōji. Shuwawa is a junmai made with Aomori Hana Fubuki sake-specific rice, 11% alcohol, nihonshudo (SMV) of an astonishing -45 and acidity 10, priced at JPY 2,300 for 720 ml.

Sake usually has lactic and malic acidity, but not citric. Takatsugu commented that citric acid is also produced during chocolate fermentation, but there is a lot more lactic acid and so that’s the impression people mostly get from chocolate. He gave specific instructions for the fermentation of the cocoa beans used for this bar, producing a very deep, miso-like flavour.

He commented that the pairing was a bit of an acquired taste. Marie said it didn’t really work, but might be better if sansho pepper was added to the sake. [She uses this a lot in her pairings.] She described the chocolate and sake as two colours that don’t conflict but also don’t mix, and thought the spice would bridge their flavours.

She added that sake is never as sweet as chocolate, but can be equal in lactic and malic acids, which she described as “cool” acidity. She noted that the chocolate was very fragrant, which suggested sansho pepper would work, and also commented the chocolate would go with miso. [Which I had never thought of before, but I did have a chocolate in a Cocoa Runners subscription box once that advised pairing with cheddar and it was wonderful.]

The second pairing was doburoku from Minshuku Tono [the same one she pairs with her classic ham katsu in GEM by Moto] which has plenty of naturally produced lactic acid.

It was paired with Minimal’s 80% High Cacao, a blend based on beans from Ghana. The beans are dark roasted and the bar is described as very aromatic and not too bitter.

Marie said these were two were easier to pair because they both have a “gap” in their flavour profile, which she doesn’t see as a bad thing. She described them as shapes like puzzle pieces, where one can slot into the other. On the other hand, she finds it hard to pair sake with “perfect” flavour profiles as they don’t interact with other foods.

Takatsugu replied that Minimal doesn’t try to create a “perfect” flavour profile, instead trying to draw out the flavour of the cocoa bean whatever it may be.

So, lots of ideas for the next time you try pairing sake with chocolate!

← Eating rice meant for drinking Sake? There's an app for that →