Making a case for sake at room temperature 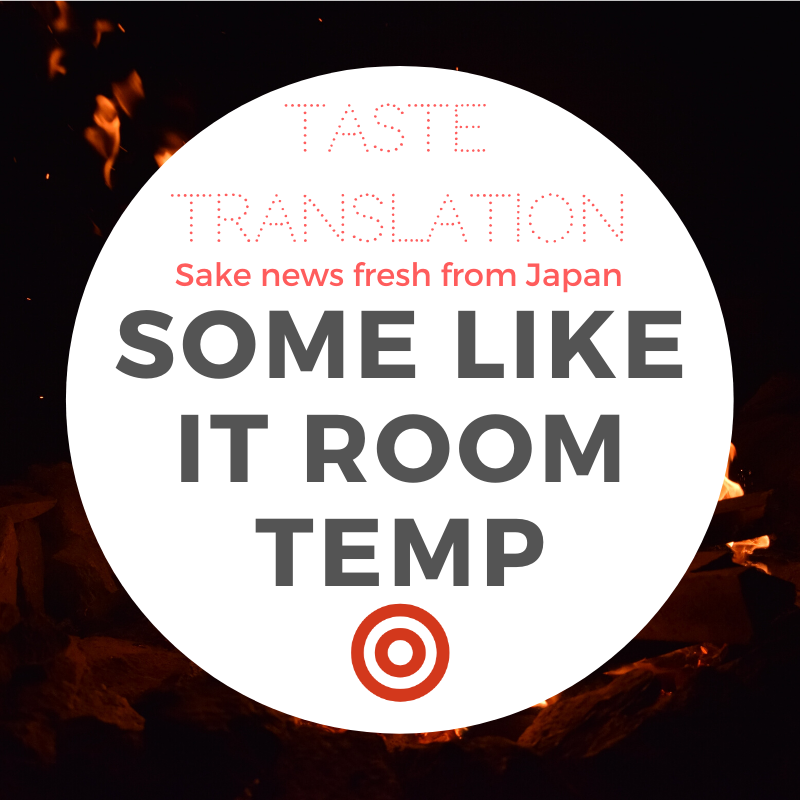 The Smart Flash site features an interview with Japanese newscaster and announcer Norio Minorikawa, better known to his fans as Minomonta. He confides to the interviewer that he wants to give him something cool to report, but although he used to enjoy it from a tasting perspective the truth is that these days, he enjoys drinking any old sake.

Although he’s had a lot of sake in his time, Minomonta chose to talk about kanzamashi (燗冷まし), heated sake that has been allowed to cool. Most people haven’t heard of it, but somehow get the impression it can’t be good.

Minomonta’s story starts with banquets where guests are entertained by geisha, with the venue owner (女将さん, okami-san) carefully collecting any and all left-over kanzake. It must have added up to between five gō (900 ml) and one shō (1.8 l) a night, he recalls. She often gave him some to drink, and it was great.

Sake was the star performer at these banquets, but as soon as the event was over it didn’t even fade into a supporting role – it disappeared off the stage completely. And so, it became the okami’s, and his. It wasn’t life-changing. If anything, it tasted a little bit lonely. Minomonta laughs as he reminds the interviewer that at the end of the day, he’s just a guy who likes sake.

He worked at a water meter company in his 30s and had to travel all over Japan, which also let him taste the sake in each region. After a sales visit to a water board in Kumamoto, he was about to return home when the head of the board offered him a drink. He went to a clump of bamboo growing in a nearby dry steam bed and starting cutting it. Minomonta wasn’t sure what was going to happen next. His prospective customer poured sake into the cut bamboo and stuck the wood into an outdoor fire, heating the sake before passing it around. [It makes me curious to hear more “travelling salaryman” stories from an era when managers in public services went around with knives and had fires on the premises…]

They called it kappa-zake (かっぽ酒, after the water-dwelling kappa in Japanese folklore). It was amazing, Minomonta remembers. Needless to say, they never got back to work after that.

Minomonta tells the stories with joy, and the interviewer finds himself enjoying them to the point where it feels like the buzz from a few drinks. Who, when, where, how…  it’s like enjoying sake through the 5W1H formula, or maybe it’s “Mino style” [referring to how Minomonta speaks as an emcee.]

No matter how good the sake, it never tastes good unless you drink it with people you can enjoy being with, Minomonta adds. He also makes a personal point of never talking about work when he drinks with friends. He went out with fellow performers Gori (Toshiyuki Teruya) and Hiroki Kawata of Garage Sale when they started recording a programme, and they agreed to not talk about work. Same when he went for drinks with Junji Takeda. The whole point of going for a drink is to have fun, he refuses to ruin it.

So, what are Minomonta’s favourite ways to drink? He answers that he likes sake both hold and cold (熱燗, atsukan and 冷, hiya) but particularly at room temperature (常温, jōon or “normal” temperature) as he feels that’s the temperature where he best understands what the brewer was aiming for. He also enjoys slicing sake-kasu [sake lees] and lightly grilling them over charcoal, finished off with some salt or miso as he finds they interfere least with the taste of sake. He’s tried a lot of different things, and this is what he settled on in the end as his go-to drinking style.

Salt or miso side dishes with room temperature sake is a powerful combination. Minomonta advises tasting the sake on the tip of the tongue first, which makes even very cheap sake taste like the really good stuff by the time you swallow it.

So his final answer is “room temperature, salt, miso”.

← Wine made with sake yeast Bio, organic, natural - coming to a sake near you →