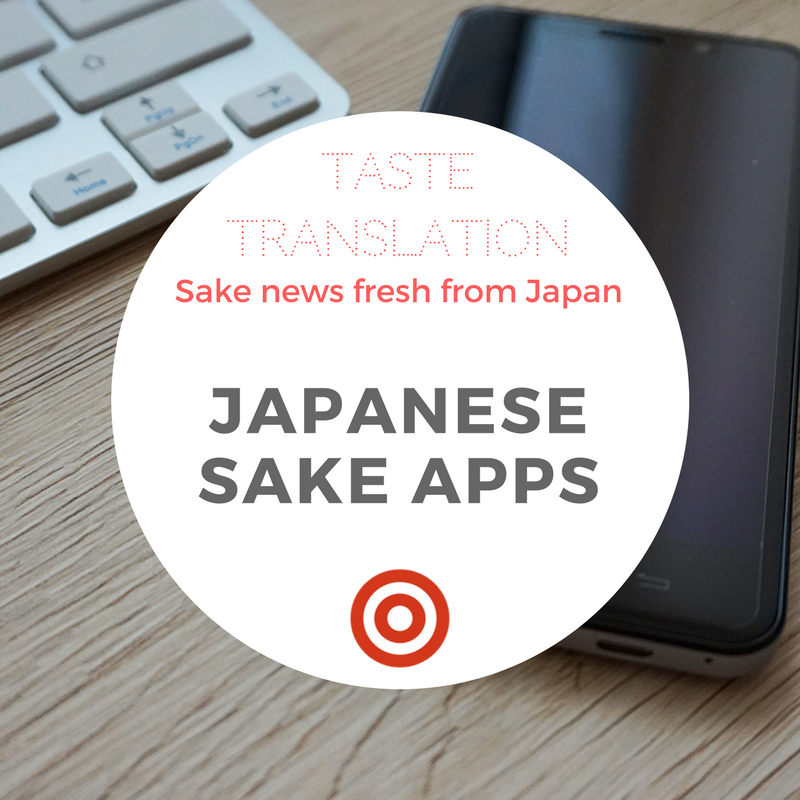 First is Sakenote, which arranges records of the sake you’ve drunk in a list with photos, allows you to search for a brewery or brand by name, take notes and share to Twitter and Facebook. It also has a “Live” feature where you can show other users what you’re drinking and they can send you a “kanpai” which you’ll see as a notification. (This will apparently “connect sake fans all over the world”.) There is also a listing of sake shops, although all in Japan and in Japanese from what I could see.

I particularly liked their claim that taking photos and making notes is so easy, you can do it even when you’re drunk. The app is available on the Apple app store and Google Play. I installed the Android version and tried it out – the introductory screens are in Japanese only, but after you scroll through them the app appears in English. It looks easy to use, and the search function supports romanised input so you don’t need to enter any Japanese. The terms and conditions and privacy policy seem to be in Japanese only, and all the users I could see on the first few screens of the “Kanpai” screen were Japanese and writing in Japanese.

So, looks good for keeping track of your own sake consumption but the other features may not be as useful if you don’t speak Japanese. (Unless we get some groups going in English…?)

Next is &Sake, which is available for iPhone only so I couldn’t test it. Cookbiz describe it as a lifestyle app where you can read about, learn about and buy sake. You’re asked to select your age bracket so it can show you “appropriate” articles, and the next screenshot shows a wall of photos not unlike a glossy magazine, with articles coming from Sake Times and GetNavi.

Although the app looks beautiful, it seems to import only Japanese news articles so will be of limited interest to anyone who doesn’t read the language.

Finally, Sakenomy, which is apparently “sake” + “gastronomy” but is also a great pun on “sake-drinking” in Japanese (a language that loves puns). It claims to have the world’s largest sake database, with over 7,000 brands – and if you find one it doesn’t have, you can add it yourself. It’s also linked with another familiar name – Hidetoshi Nakata, the former national football team player who seems to be devoting himself to popularising sake (including in Kit Kat form) listed in the Google Play description as both “curator” and “supervisor”.

You have to sign up, although you can also do so with your Facebook, Twitter, Google+ or Yahoo! credentials. The app claims to be able to search for a sake from a photo of the label, which is very interesting. It allows you to record sake you have drunk, list ones you want to try, and plot a sake’s position on the SSI aroma/flavour chart (which is a much better way of describing a sake than the milling ratio pyramid).

I installed the Google Play version, which immediately presents you with the terms of use in Japanese with “Google Analytics” and “Accept” the only words in English. (My non-Japanese speaking other half commented that he would have exited and uninstalled the app when faced with that.) After accepting the terms you sign up, choose a nickname and language, and start. Interestingly, the first option is to scan a label – when I brainstormed ideas that I’d like to work on, an app that reads sake labels was top of the list (but I’m still new to the field so it’s no surprise that someone got there before me). The photo guidance screen is in Japanese, but when tested on an (empty) bottle of Nouvelle Gekkeikan Junmai Daiginjo it came up with the Jumai Daiginjo and Honzjozo of that brand – impressed!

However, I later installed the app on my tablet where it seemed unable to operate the camera properly – the app forces the tablet into portrait mode and the camera goes into a very disorienting hall of mirrors state where everything is rotated and distorted. After some hilarity with me turning the bottle this way and that while my other half did the same with the tablet, we managed to take a reasonable photo but the app didn’t recognise it. You can also take a normal photo and upload it to the app for recognition, but this time it got it wrong – it correctly identified the brewer as Gekkeikan but gave another brand instead of Nouvelle. This would obviously be an issue if you’re completely reliant on the app to identify what you’re drinking.

The app supplies the name and location of the brewery in both English and Japanese, together with options to “Check-in!” and “Waitlist!”. (Needless to say, as a translator, this is making my blood boil.) The tasting notes are in Japanese only, but you can rate the sake, see the recommended price in Japan (which may make you cry) and see where other people have rated it on the aroma/flavour chart. Most, but not all, of the label information is available in English – it has ingredients, rice variety, polishing ratio and alcohol content but flavour, water and “Edition” are in Japanese. It also shows the date the record was created, other users who have drunk the sake and their ratings, and a list of places where you can drink the sake, although this was affected by font corruption and opens on Tokyo.

The News and other tabs are however mostly in Japanese, or poorly translated English. although the Search tab is translated and lets you see sake by prefecture and Advanced Search lets you search for processing details such as muroka (non-fined) or genshu (undiluted) and many more, although oddly there didn’t seem to be a way to search for different brewing starter methods such as kimoto or yamahai that can have a big impact on the end product. There’s an excellent section on reading the label and sake terminology, food pairing, and the aroma/flavour chart.

I don’t think &Sake is going to be very useful outside of Japan, but both Sakenote and Sakenomy have a lot of potential.

Sakenote is simple and focused on what you’re drinking, acting like a sake notebook. The “live” feature gives it a bit of interaction, although that part of it seems to be only used in Japanese.

To me, Sakenomy’s photo recognition feature is the big winner – although the translation in the app could be more complete and much better than it currently is, this label scanning takes a lot of guesswork out of identifying a sake which I think must be one of the big barriers to people purchasing and enjoying sake. However, it’s not foolproof and a lot of the app is still in Japanese which may put potential users off.