This was a classic case of a good deed coming back to reward you in expected ways. I gave my brother a ticket to a Sake Service Institute (SSI) tasting for his birthday last year, as a result of which he was put on a mailing list advertising this event. He forwarded the email to me and I asked to attend even through I hadn’t been on the original list, and the Japanese Embassy kindly allowed me to come along and take photos.

I arrived early at 5:30 pm on Wednesday 5 July 2017 to go through security and attend a press briefing (and spent the rest of the evening explaining that I’m not a reporter) before being ushered upstairs to the embassy reception rooms where the hosts and International Wine Challenge sake category trophy winners were waiting to give their presentations before the tasting.

Minister Seko commented that sake exports were up by 10%, and that over 1,200 sakes from 300 brewers had been tasted in Hyogo in the run up to the IWC awards. He referred to London as the vanguard of sake in Europe.

Andrew Reed of the IWC reminded everyone that the grand prize for the sake category would be announced at their gala dinner the following evening, and also offered free tickets to the WABI Japanese food and drink event to all attendees. (I went to the trade day on Friday 7 July 2017, which I’ll write up soon.)

Rie Yoshitake introduced the Sake Samurai Association, founded in 2006 with the aim of protecting sake culture and promoting sake internationally.

The brewers and their trophies were: 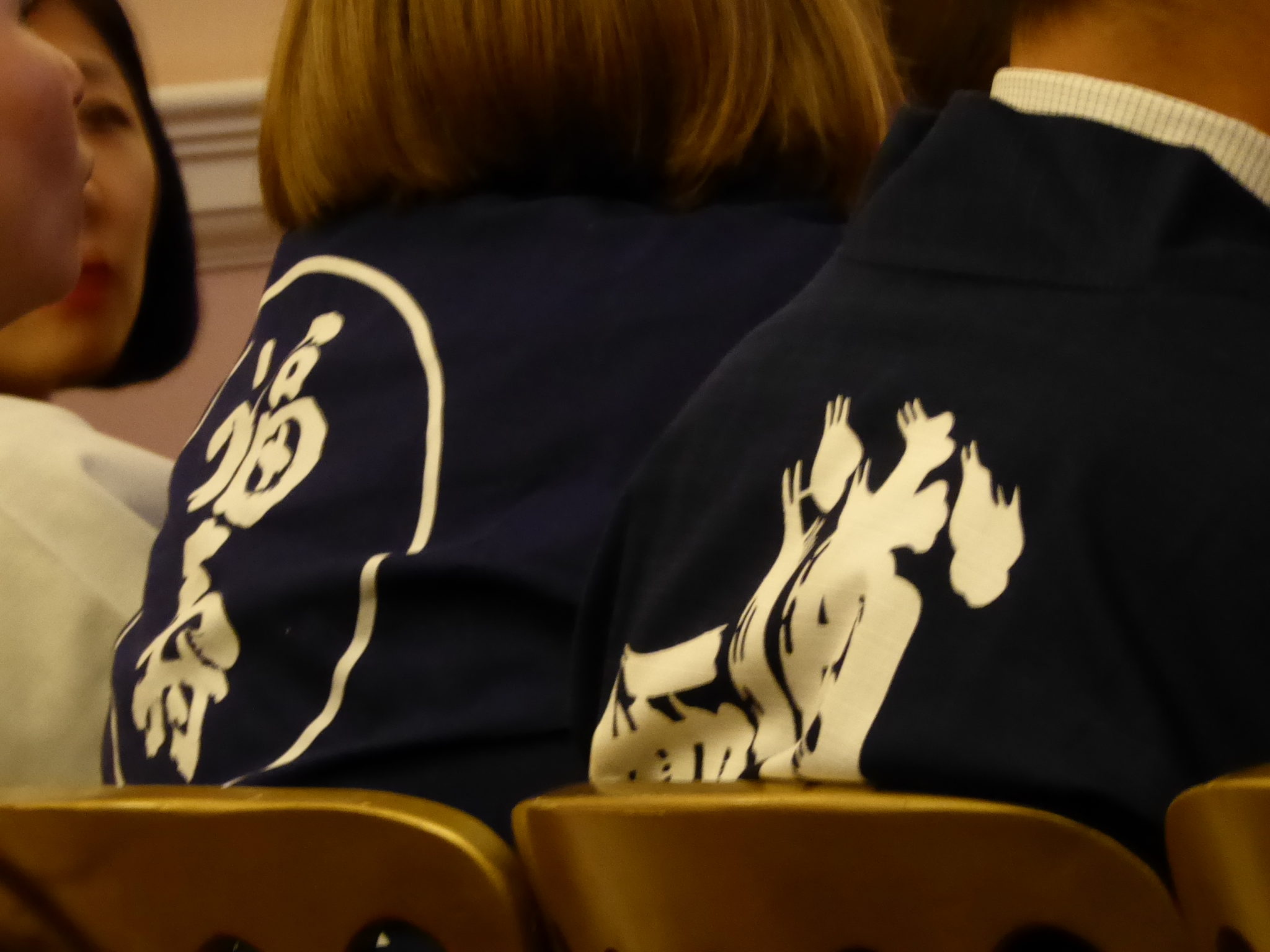 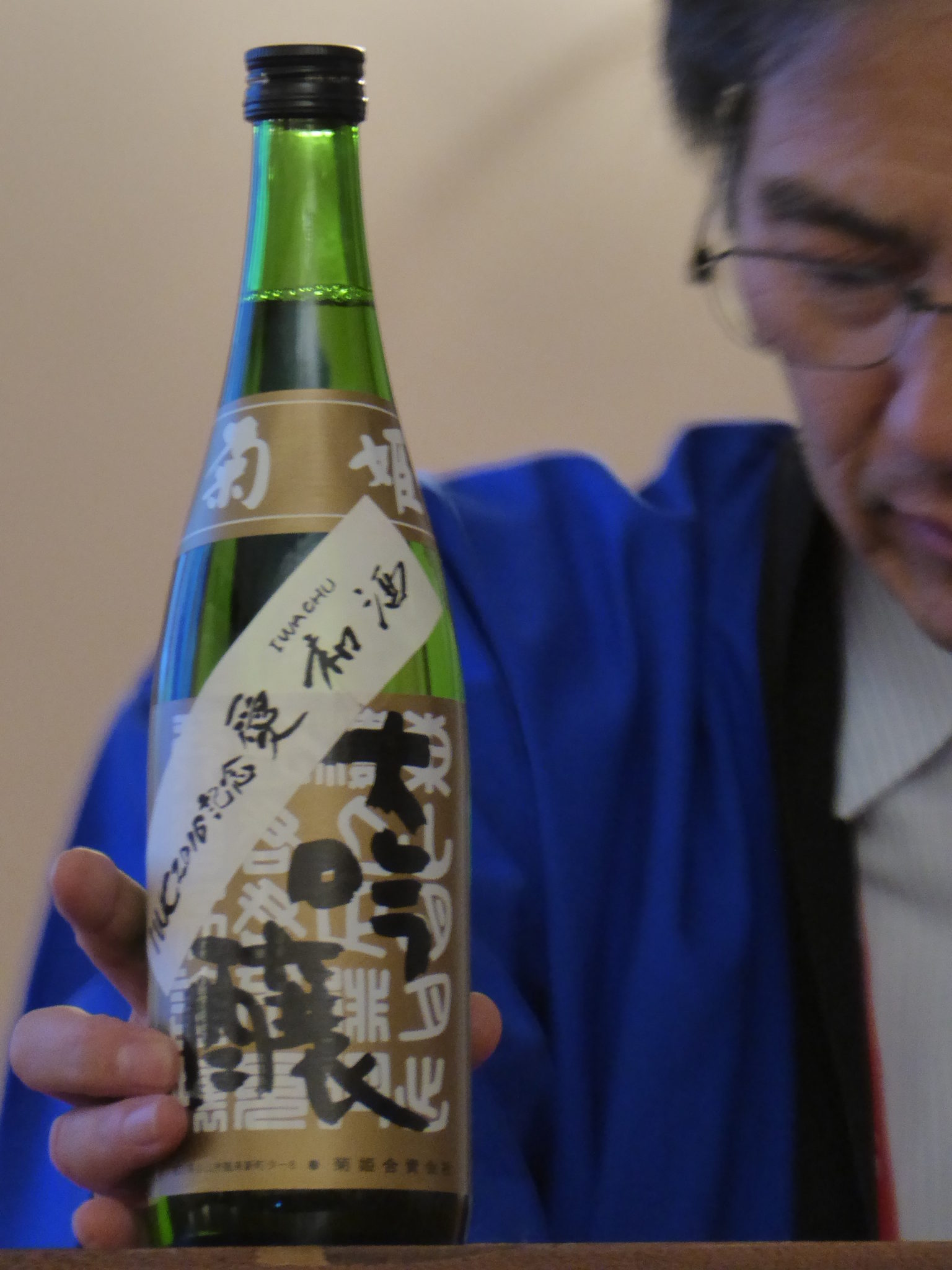 Sake of Hyogo, a regional association dedicated to promoting (evidently) sake from Hyogo, also gave a presentation. As well as introducing a new variety of sake rice, Hyogo Nishiki, the representative (whose name I didn’t catch) spoke extensively on the Hyogo “terroir”.

This was a bit mystifying, as Natsuki Kikuya (the tutor on the WSET Level 3 Award in Sake course) had been clear that there was virtually no “terroir” from the rice variety used to produce a sake. Other factors in the production process, such as yeast and starter method (kimoto, yamahai, sokujo) could be detected in the final aroma and taste, but not the rice. This particularly makes sense for daiginjo and ginjo styles, where the rice is intensively milled before brewing starts, leaving only the starch core. It could be that the “terroir” here was the traditional, distinctive Hyogo brewing practices that produce a specific type of sake, but as both the WSET course and John Gauntner point out (in Regionality in sake), there is no causal connection to the region where the raw materials were produced in the same way as there is with grapes, coffee beans or cacao. Regional differences in the mineral content of local water do have an effect, but rice is frequently shipped to different regions for sake production. The same area – even the same brewery – can produce completely different styles from the same raw materials. So I wasn’t entirely sure what this “terroir” was about.

One very nice touch was that the IWC judges had been invited to transplant rice seedlings during their visit to Hyogo and the Sake of Hyogo team had brought sake made from that rice.

Although the event ran from 6:00  to 8:15 pm, after the greetings and presentations I didn’t have time to get around both rooms and talk to everyone, let alone try all the sake. My tasting skills aren’t developed enough to get much out of such a hit-and-run approach to so many sakes. In the end I made it all the way around one room and half way around the other, with a quick dash right as time was being called to sample the Nara Tanzan kijoshu ruijoshu, a style I hadn’t tried before.

It was a fantastic opportunity to meet so many brewers and taste so many sakes, and I’m very grateful to both the IWC and the Embassy of Japan in the UK for hosting the event along with Sake Samurai. It was a wonderful evening where I had a chance to briefly catch up with a few people, like Oliver Hilton-Johnson of Tengu Sake and Tom and Lucy from Kanpai London (a sake microbrewery in Peckham). Natsuki Kikuya was there as well, although I didn’t realise it at the time!

The event was very crowded – I arrived early and didn’t notice how many other people were there until one speaker referred to “people standing at the back” and I realised how full the room had become. There were small crowds of people around each table and you had to patiently wait to make your way to the front to taste the sake, let alone speak to the brewers or their representatives. This wasn’t great for me, as I wanted to talk to the people behind the stands and take my time tasting the sake. As it was, there was no room to put the event booklet down and take notes (even though there was space for your own notes in the booklet, underneath the official tasting notes) or to jot down any interesting observations or ideas to follow up on. But it wasn’t my event and maybe the aim was to introduce as many people as possible to as much sake as possible in two hours or less.

Based on my brother’s experience at the event two years ago we started in the second room. Previous events had been held after the IWC awards dinner, when the Champion trophy had already been awarded, so there had been an issue with everyone heading for the Champion sake first and the brewer running out. However, as this event was held the night before the final IWC award for the Champion in the sake category there was no such pressure.

The first table we went to was Nabedana, where the interpreter offered us their excellent Fudoh Keikai Karakuchi. She introduced it as a “lower” type, probably referring to the sake milling ratio pyramid which lists the different recognised styles (tokutei meisho) in order of how much of the rice is milled away – daiginjo/junmai daiginjo are at the top with their minimum milling ratio of 50%, followed by ginjo/junmai ginjo with 60% of the grain remaining, and honjozo/tokubetsu honjozo/junmai/tokubetsu junmai at at the base with a minimum milling ratio of 70%.

This pyramid gives a certain amount of information about the style of the sake, as daiginjo and ginjo tend to be light and floral, and honjozo and non-ginjo junmai are generally more full-bodied and savoury. (Image on the right taken from Tengu Sake.) However, not only is this a rule with plenty of exceptions, there’s an unfortunate tendency to assume that the top of the pyramid means higher quality, when this isn’t necessarily the case. (Mathieu and Emi at MAME, where I do my coffee tasting, are very keen to avoid this automatic ranking that the mind performs in the absence of other information, diligently hiding packaging and identifying coffees only by three-digit numbers to avoid preconceptions. It’s an interesting case of “system 1” as described in Daniel Kahneman’s Thinking Fast and Slow.)

I much prefer the SSI’s “four types”, based on two axes of aroma and flavour, which gives similar information about style without suggesting any innate level of quality. It can also accommodate styles that don’t fit in the pyramid, such as new, unpasteurised sake (nama) and aged sake (koshu). I haven’t been able to find an English version of their chart, but the one on the right from the Japanese Sake and Shochu Makers Association has a great summary. (Click on the images to go to the pages they’re originally used on.) 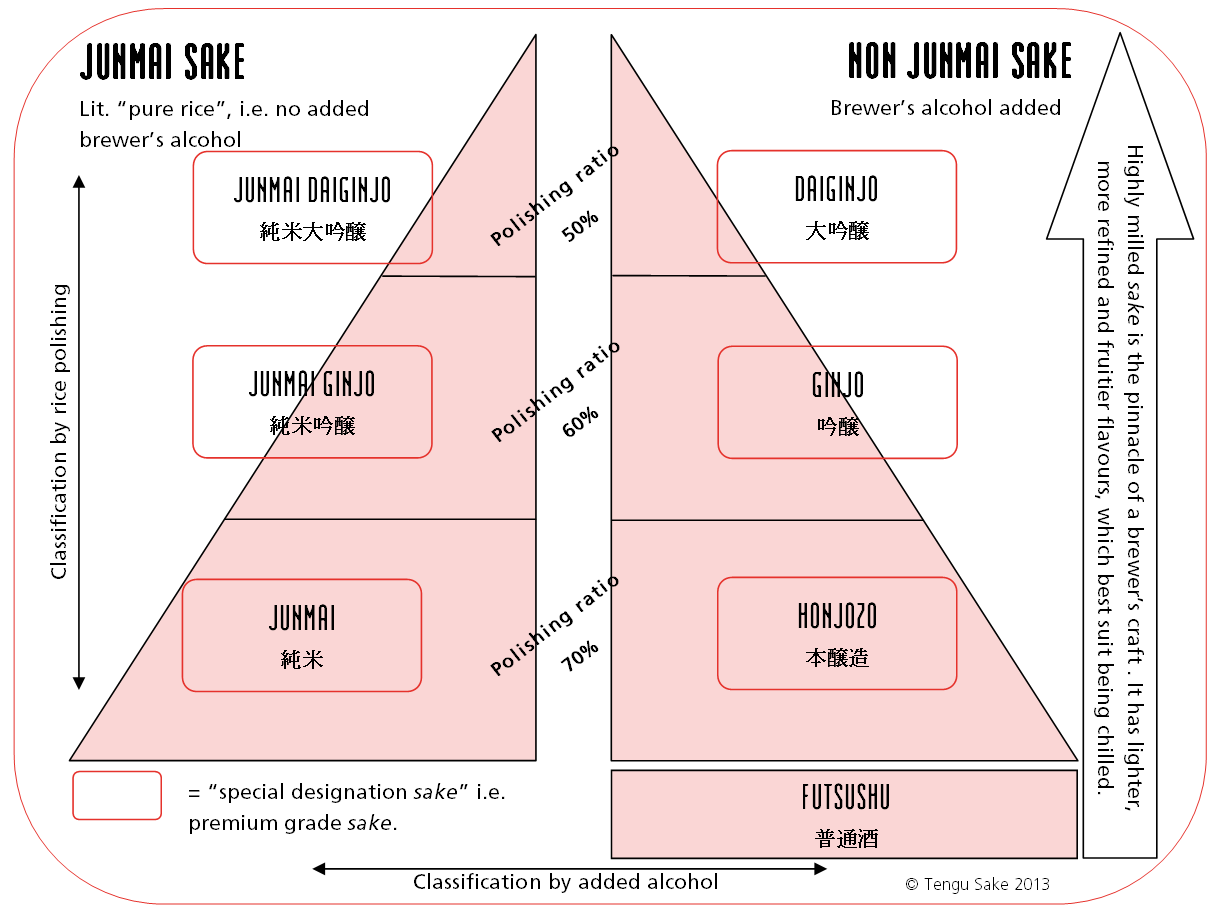 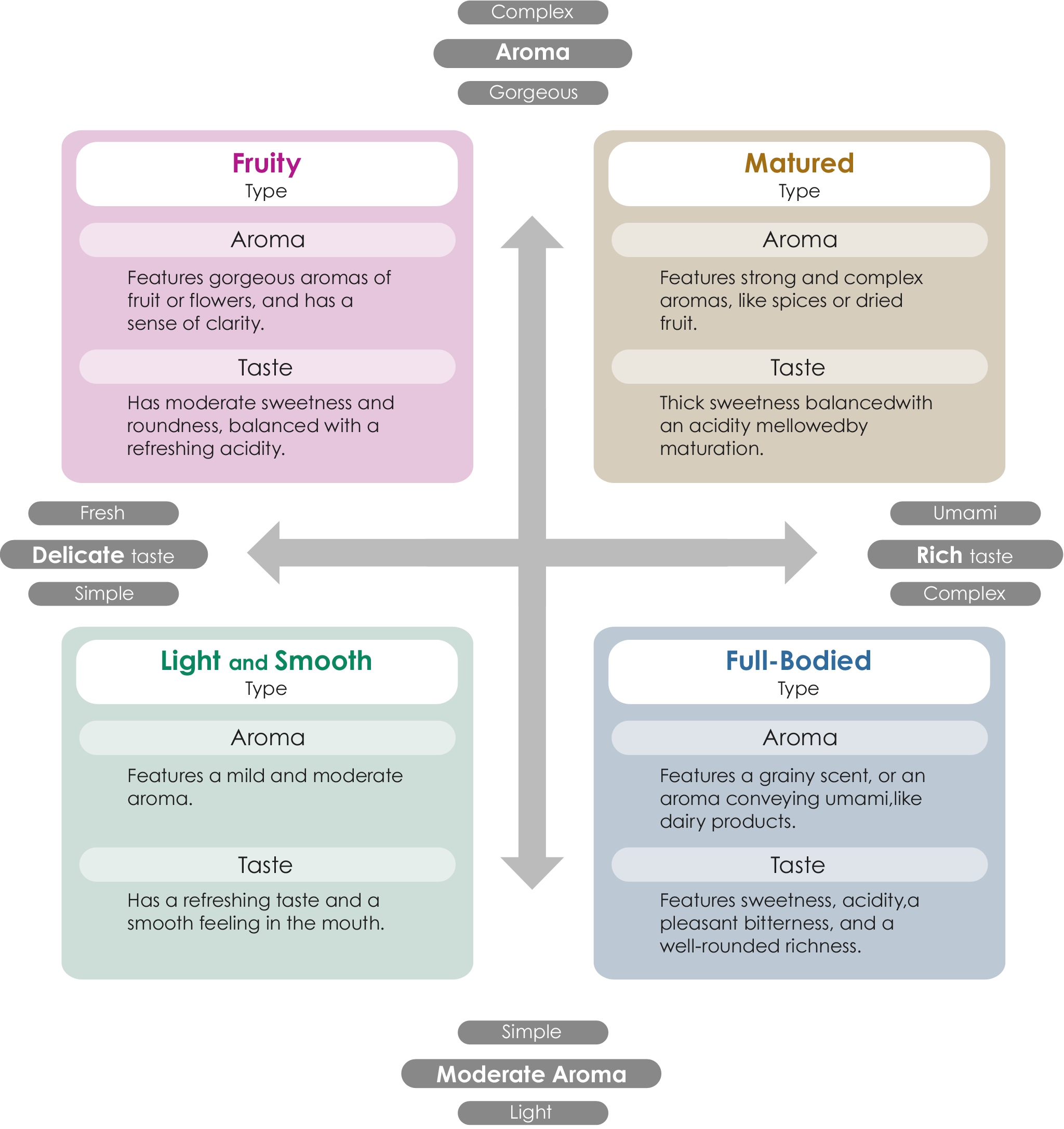 “Four types” diagram, which I think comes from the SSI (image from Japanese Sake) 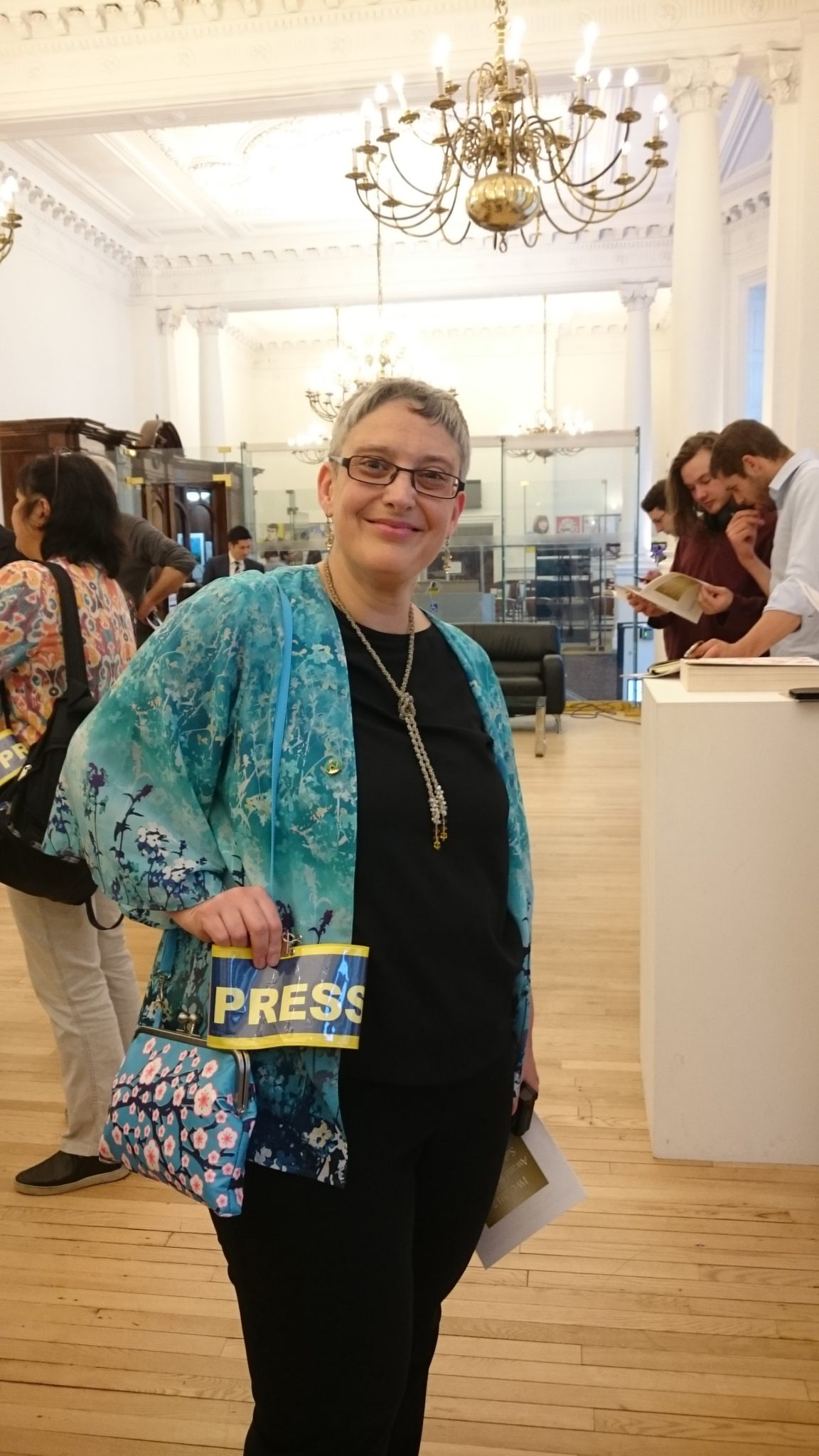 I met Oliver Hilton-Johnson again at WABI and suggested a short introduction to sake might be useful for the next event – I don’t know what the target audience was and therefore if everyone would be familiar with sake terminology. Not all the brewers tried to explain the styles they had brought for tasting, and Nabedana may have focused on explaining the futsushu style as that was the IWC trophy they won, but if some attendees didn’t know much about sake then a bit of information might have been useful. There was no explanation of styles in the event booklet.

I would have loved to have more time, and more space. This was more like my idea of speed dating than a tasting. At least I was able to greet most of the brewers and exchange cards and follow up with them later, and I’ve put a few more pins in my map of places I want to go in Japan. (It’s getting to the point where a month won’t be long enough to go everywhere.)

A lot of my photos didn’t come out well. I’m not a professional photographer and couldn’t get good shots in the indoor lighting (let alone when the brewers were standing in the projected images during their presentations) but I’ll post the few good ones.

I’m aware that there’s a lot of specialist terminology in here, and I need to work on producing a glossary! That will be next on the list after I post photos from the embassy and write up the trade day at WABI from Friday 7 July 2017.