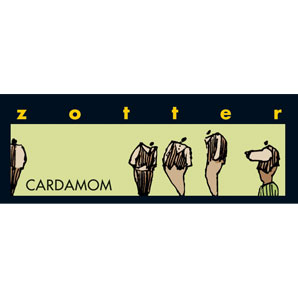 I had prepared some sake and chocolate for tasting (both alone and together) over the May bank holiday weekend, but we didn’t get around to it. Instead, we ticked a very old item off our to-do list and cleared out our kellar (underground storage room) to prepare for fitting some shelving. One pleasant surprise was finding an autographed Kodō poster that I actually have no recollection of, but which is now framed and ready to go up whenever we get around to putting up any pictures.

One thing we did have was the Zotter hot chocolate bars left over from the Easter chocolate tasting!

I love cardamom. I’ll add it to anything (it’s the prime suspect in scratching and destroying my first Aeropress) so that was an easy choice for me. My other half likes white chocolate, so I went with the vanilla white chocolate bar for him, which reportedly tastes like marshmallow, particularly after it’s been frothed.

There were no instructions I could see on the bar (it is pretty small so all the space is taken up by the ingredients) but they were easy to find online on the Zotter Cardamom product description page. I went for the “stirred” method with 250 ml of semi-skimmed local milk. The bar was at room temperature and fairly soft to the touch, so I gently dropped into the pan of warm milk and left it to melt. There was only a faint smell of cardamom from the bar, but it became much stronger as the bar melted. I left it for three or four minutes, whisked, then left it for another minute or two before drinking.

It wasn’t as nice as I was expecting based on the smell as it was melting – the taste was much more subdued, like milk chocolate praline with a hint of cardamom. I didn’t notice coffee beans in the ingredients, only when I was reading the product page to write this, so that may have affected my perception. Although I had left the bar in for longer than suggested, there were still bits of it left in the bottom of the mug at the end (they were very nice, if unexpected).

I’ll give it another chance, this time taking the coffee into account and maybe turning up the heat and the whisking!