Easter. We’re a big fan of Lindt chocolate bunnies, but this year – after getting into tasting through sake and coffee – I decided to go for an Easter chocolate tasting instead!

I had no idea where to start, so after hearing about Eagranie Yuh‘s Chocolate Tasting Kit on Simran Sethi’s Slow Melt podcast I got the Kindle version from Amazon.com. (I didn’t have time to wait for shipping of the physical box, and for some reason being in Switzerland, outside the EU, means I have to buy digital versions of books from the US Amazon shop.)

On another note, I submitted a review to Amazon.com stating that the tasting cards were missing but the title of my review was changed from something like “Kindle version does not contain flavor cards” to some positive wording copied from the second paragraph of the review… I’ve sent a complaint and will see how it goes, but if Amazon customer reviews are being altered before publication then they can’t be trusted even where they are genuine.

I followed one of the tasting “flights” suggested in the Chocolate Tasting Kit, namely two dark chocolates, two milk chocolates and two flavoured chocolates. I bought two at a local supermarket and four at a speciality chocolate shop in Zürich main station, House of Chocolate.

(For anyone who hasn’t heard of Migros, they’re one of the two big supermarkets in Switzerland. However, the “Selection” packaging looked familiar from other premium “own brand” products I’ve seen in the UK, so they may be from a common supplier who makes chocolate for other companies, like Halba who are part of the other big supermarket, Coop.)

We actually opened the chocolates on Good Friday to share them with a friend after coming back from a hike. I tasted them from highest to lowest cocoa content – the 100% Madagascar was definitely past my limit of enjoyment but was great for calibration! The Chocolate Tasting Kit booklet gave some very interesting advice on what to look for in ingredients listed, and the 100% ticked all the right boxes as it was pure cacao solids and cacao butter, nothing else.

Tasting the 70% Trinidad next, it was amazingly light and delicate! 70% is usually the limit of what I enjoy in chocolate, my current favourite bars are around 50-60%. Compared to the 100% it was floral and creamy – although the impression I had was totally different when I tasted them from light to dark.

Next was the Dolfin Earl Grey, which just described itself as “dark” on the front of the package but had the cacao percentage (60%) stated on the back. (I assume it’s EU or other legislation as I almost always see it.) I stopped buying Dolfin a while ago, even though I like their unusual flavours, and I couldn’t remember why – it was the texture. It’s grainy and gritty and not what I expect from something packaged like a luxury chocolate. (My other half pointed out that the packaging looks like a pack of loose tobacco.) There were inclusions in both Dolfin bars we tried this time, Earl Grey and sencha, but that wasn’t enough to explain the texture and I remember it from previous Dolfin bars.

Next up was the 45% Labooko Santo Domingo. It was… nice. Classic milk chocolate, but not much more than that. Looking back, and thinking about how Emi and Mathieu at MAME ordered their coffees for tasting from most delicate to most flavoured, going from dark to light may not have been the best approach to pick out the flavours in this bar (especially with a jump from 60% with a black tea flavouring).

I had the same problem with the Dolfin sencha bar as with the other one – the texture. The flavour was nice (I love green tea and especially in powdered form) but the texture was distracting.

Finally it was the 35% Panama bar from Labooko with its gorgeous cover. I really like the two 35 g bars in a pack as well, it’s great for savouring them in two goes rather than having everything at once. The colour was startling, beige, and the chocolate was extremely sweet even compared to the Dolfin sencha which was 38%. Like the 100% Madagascar at the beginning, it was a great extreme for comparison but not sure it was all that interesting as a chocolate in its own right. My other half described it as a chai latte in a bar – it has cinnamon and what looks like whey powder, which may fall afoul of Eagranie Yuh’s ingredients list.

We then repeated the tasting on Easter Sunday, and this time I started from the lowest cacao content and worked my way up. 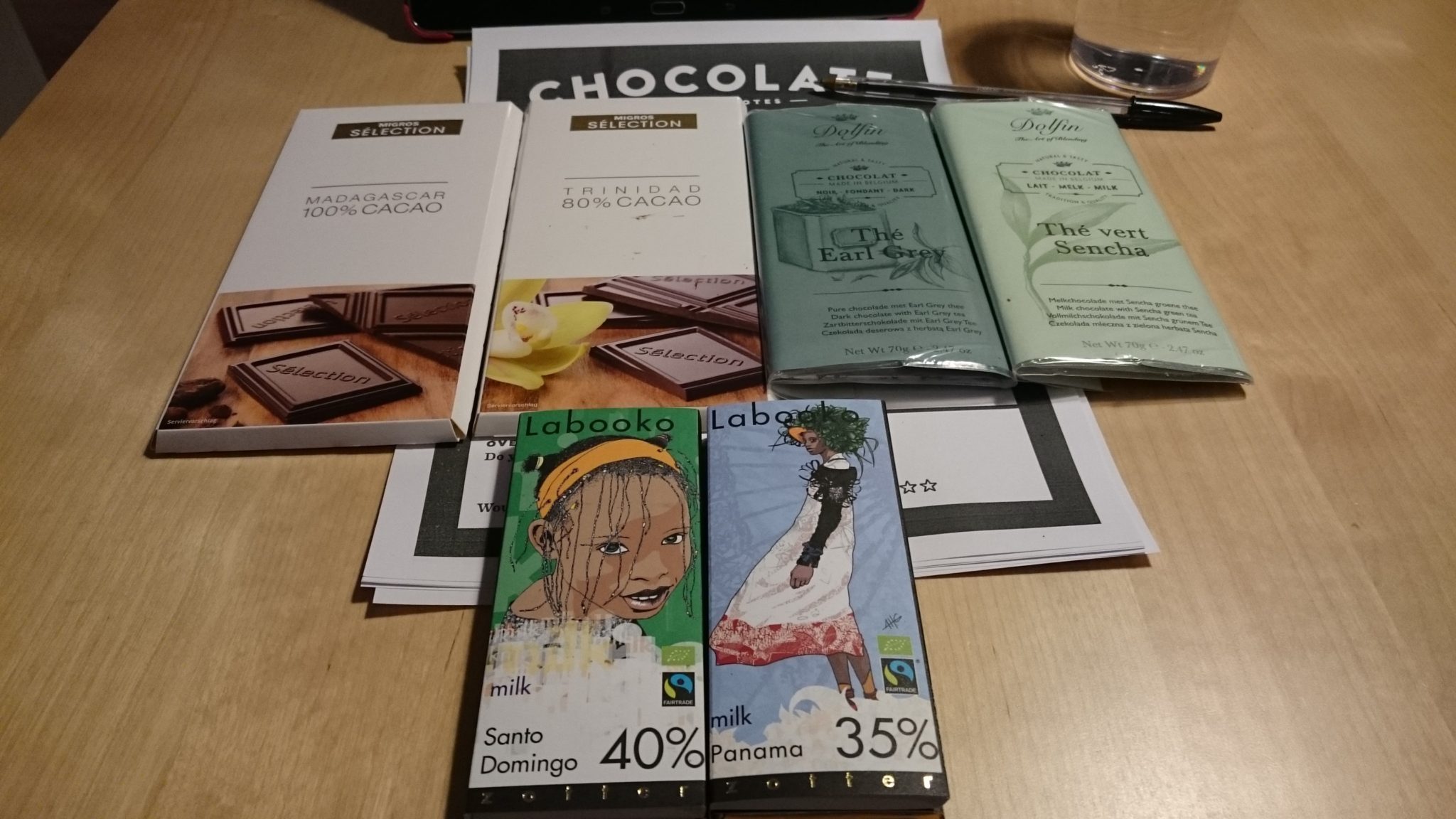 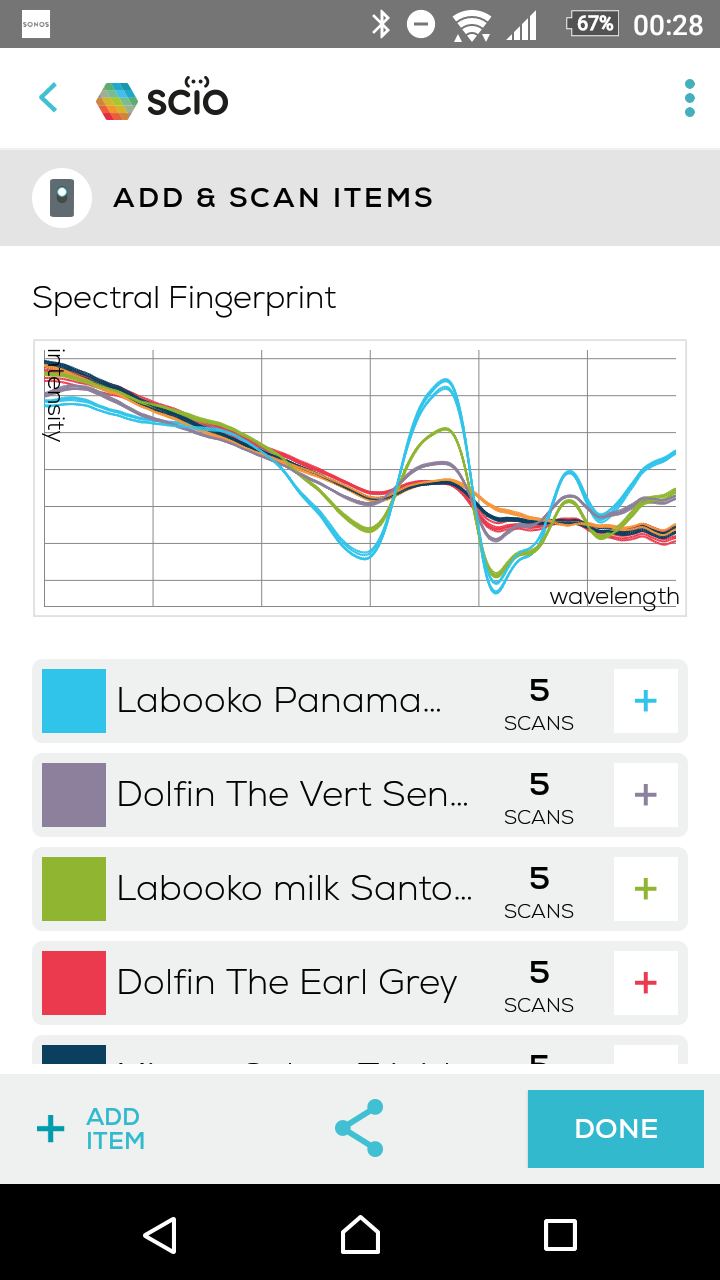 We also took the opportunity to dust off our SCIO units (portable near infrared spectroscopes) and try them out! We created a new applet and scanned all six chocolates into it, and apart from occasionally thinking the 80% cocoa bar was the 100% one the SCIOs recognised everything. It was very interesting to see how the spectrum flattened out for the higher cocoa percentages.