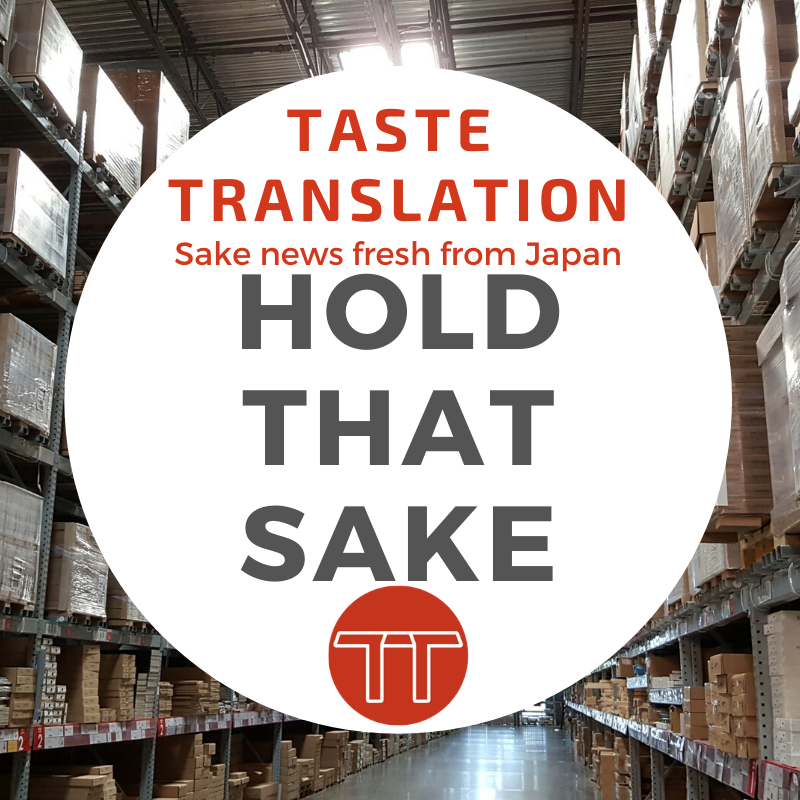 After earlier reports of trouble in Yamagata Prefecture (From Yamagata – coronavirus starts to hit sake producers) the Fukui Shimbun Online reports that sake brewers and retailers in the prefecture are being badly hit by the measures taken to prevent the spread of coronavirus.

The official advice to stay at home caused waves of bar and restaurant closures in Fukui City and across the prefecture, which in turn has led to a sudden drop in orders and sake piling up in storage. The drop in sales is especially noticeable as it comes at what is usually a period of high demand.

[1 April is the new financial, administrative and school year in Japan, when companies, schools, etc. hold farewell/welcome parties for staff who are leaving or joining.]

Uno Shuzō in Ono City ship around 60% of their sake to the Kanto area. [Tokyo and suburbs/nearby cities.] They supply around 200 bars, restaurants and retailers via wholesale partners. President Nobuhiro Uno appeared defeated, saying that orders started to drop in early March, when the virus first began to spread, and there were almost none for April. It’s a heavy blow for the brewery.

Their sales for March and April are about 20% of what they were last year. Sales to the Kanto area dropped from 60% to 10%. Their warehouse is packed with crates stacked to head height, full of sake they don’t know if they can sell. Uno said he could see no way out, and they would just have to endure the situation for now.

Tanabe Shuzō in Eiheiji-cho had increased their production of high-quality sake in anticipation of increased demand linked to the Tokyo Olympics. With the games postponed, and no end to the anti-coronavirus restrictions in sight, their high hopes have come back to haunt them. Managing Director Hiroaki Tanabe, who is also vice-president of the Fukui Brewers Association, confessed that as they were looking forward to start selling their sake after the long and hard winter brewing season the timing was particularly painful.

Exports are also affected. Kakutaro Kubo, president of Ippongi Kubo Honten in Katsuyama, said their exports to China fell to their lowest ever at the end of January. People stopped going out to eat in the US and Europe before restaurants were affected in Japan, resulting in cancelled shipments in March. Sighing, he reflected that a pandemic leaves no country unscathed.

Katsunori Miyagō is head of Sake Miyagō, a wholesaler that supplies Fukui sake to izakaya inside the prefecture and in Tokyo. He laments the fact that most of their restaurant and bar customers have closed, meaning orders have fallen to close to zero. Demand usually rises in March and April because of welcome/farewell parties held near the start of the new financial and administrative year, making it the second-highest season for demand after the year end/New Year period. However, orders from Tokyo stopped at the beginning of March, and those from inside the prefecture at the end of March.

Sake Miyagō stocks sake from almost every brewery in Fukui Prefecture, shipping it across the country. Miyagō accepts that the advice to stay at home is necessary, and all he can do is back up the breweries somehow. The only solution he can find at the moment is to put all his efforts into retail and online sales.

Masahide Saitō, Managing Director of the Fukui Brewers Association, commented that the situation was a heavy blow for the prefecture’s brewers. He hoped that people would continue to support Fukui sake by enjoying it at home.

← Some sake with your takeout? Now you can in Japan Sake saves the world, or at least the children, allegedly →