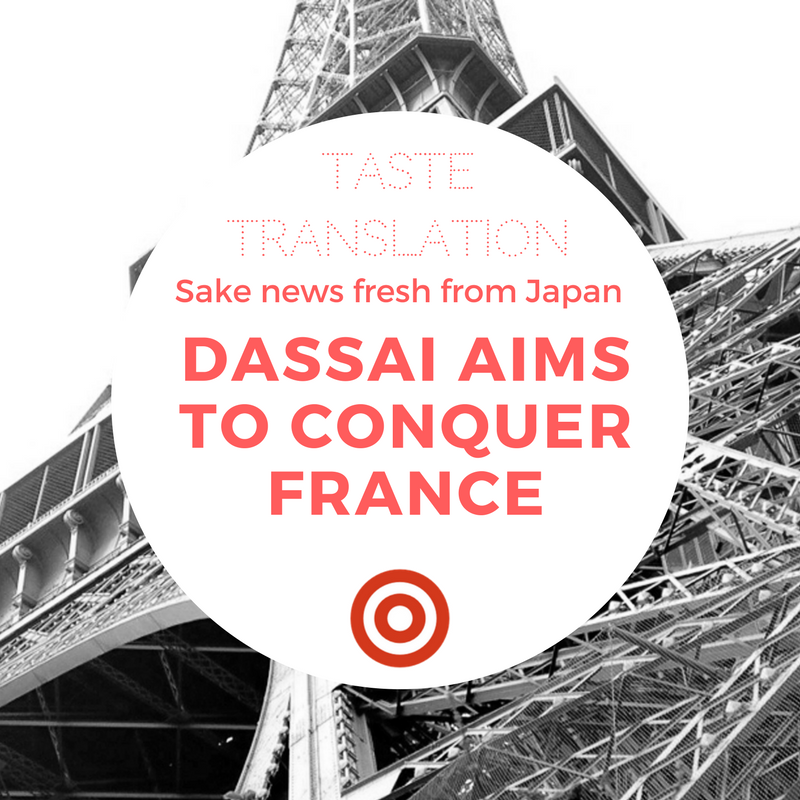 Writing for Sake Times, Paris-based sake journalist Tsuyoshi Kaneko reports that the brand Dassai has set itself the grand aim of becoming the name the world thinks of when it comes to Japanese sake, with France as its first target.

Dassai announced at the end of last year that they were opening a shop in Paris in partnership with chef Joël Robuchon, a move that Kaneko thinks bears all the hallmarks of their strategy for opening up new markets. He interviewed Dassai’s European representative, Kaoru Iida.

Iida feels that the progress of sake overseas is being held back by tradition and taboo. She is working with importers in all European countries in order to get Dassai on the shelves. Her aim is to lower the barriers to sake‘s diffusion, and have people choose Dassai as naturally as they would select a wine. She sees the inability to disentangle sake from its identity as something Japanese and part of Japanese tradition as one reason why it hasn’t taken off in Europe, which has a number of formal but invisible taboos. Iida suggests that just as more people in Japan turn to a cold beer in the summer, the French are likely to drink rosé wine or champagne. (Not sure if this is supposed to refer to “sparkling wine” rather than champagne per se.) Sake is slightly more alcoholic than either of those options, making it hard to suggest as an alternative.

Through trial and error, Iida came up with a way to serve sake during the summer, something that occurred to her while attending an event held on a boat on the River Seine.  The booth next to hers was offering a southern French style of rosé called “Piscine”, served well chilled in a glass full of ice. (I had to check the name a few times, as the word means “swimming pool”… visions of a swimming pool full of wine.) When asked by an attendee if you could do the same with sake, she tried it with an ice cube and realised it wasn’t bad. Dassai is meant to deliver the same flavour from beginning to finish, fading but not changing, so as long as the ice hasn’t melted it should keep its characteristic punch. Iida tried serving it in that same style, and the attendees at the event drank it up.

Drinking sake with lots of ice might be criticised as wrong in Japan, but there are no fixed ideas about sake in Europe. So, Iida thinks that rather than forcing people to drink it the way it has always been drunk in Japan, sake should instead adapt to local customs. At another event, a French woman referred to the Dassai sake she was drinking as wine and Iida realised that this woman didn’t know what sake was – so Iida carried on talking to her about wine rather than launching into a definition of sake.

Although Japanese food has become popular in Paris, there are few shops stocking sake to buy or drink other than a subset of Japanese-owned restaurants. Most companies handling sake have some Japanese ownership. Dassai’s partnership with Joël Robuchon is meant to provide a way out of that situation. Iida’s aim is not to sell Dassai to the Japanese, but to encourage the French to drink it. Joël Robuchon’s restaurants in France and elsewhere serve Dassai not only with Japanese dishes but also with French ones to show how well the two go together.

Iida aims to make the name Dassai synonymous with Japanese sake within ten years, just like Château Margaux is for Bordeaux, or Veuve Cliquot for champagne. French consumers could name any number of representative examples like this for wine – but not one for sake. She intends to wait until Dassai fills that gap.

Something I found interesting – Sake Times puts out a weekly chart of the most-read articles on their site, and this is the one for the week 16-23 October.

1. “Brewing a sake with an odd name, ‘Death’, Shimane’s Kamofuku Shuzou gets serious about sake brewing” (807 Likes on Facebook / 18 Tweets)

Yes, the “sake called Death” was a great headline! But also interesting to see what stories Japanese readers are interested in.