Mathieu and Emi held a special tasting session at MAME on Sunday 9 April to share some coffees that Mathieu had brought back from a trip to the US, specifically to Chicago.

A friend insisted that he visit famous roasters Intelligentsia, and he ended up spending four enjoyable hours at their roastery. He also visited Ellipsis (serving coffee roasted by Counter Culture), Ipsento, Halfwit and Gaslight, returning to Zürich with 15 different coffees to taste.

There was some discussion of where people are from affecting their idea of what certain fruit flavours are like – Europeans who only get imported tropical fruit (such as papaya) may not have the same idea of what they taste like as people who grew up enjoying them where they are grown. The differences can be even more local, as Mathieu (who is French) admitted he had no idea what golden syrup was. He and Emi had obviously been thinking about this for a while, as they held their fruit tasting session the following week!

There were copies of the usual SCAA coffee tasting wheel, and also an alternative one from The New Black. Mathieu pointed out that the SCAA is an international standard, based on calibrated and reproducible definitions of various aromas and flavours (as set out in the World Coffee Research Sensory Lexicon). For this tasting, he suggested that we concentrate on identifying one sweet, one fruity and one acidic flavour as we went through the coffees.

We started off by smelling the dry ground coffees and making short notes on what we could smell – it’s always interesting to compare them to flavours in the brewed coffee and to see if the ones you liked dry are also the ones you like when brewed. I was happy to find that I was picking up more in the way of aromas than I did at the last tasting, although whether that was practice, better vocabulary, or more variety in this group of coffees I don’t know.

Mathieu and Emi then brewed the coffees and brought our attention to the crust that formed on top of the glasses – a thick brown crust indicates a freshly roasted coffee, whereas a think yellow crust is characteristic of an older coffee. As usual, I found that the coffee aromas I liked in the dry coffee didn’t tell me anything about what coffees I liked when brewed. I don’t know if there were too many or if I wasn’t on form that day, but I wasn’t able to pick a favourite out of all of them. We had fun comparing our own notes to the tasting notes on the packs (not all packs had them) and I found it hard to match my impressions up with the hype, except for one case where the advertised “praline” went well with my notes of “caramel and chocolate”.

There were enough glasses and not so many people this time, so Mathieu and Emi brewed another round and we tasted again with knowledge of the roasters, varieties, processing, tasting notes and packaging. Mathieu also pointed out up-and-coming countries for coffee growing, including places like Rwanda, Congo and Burundi. Rwanda is close to Kenya and he thought their flavour profiles were similar. 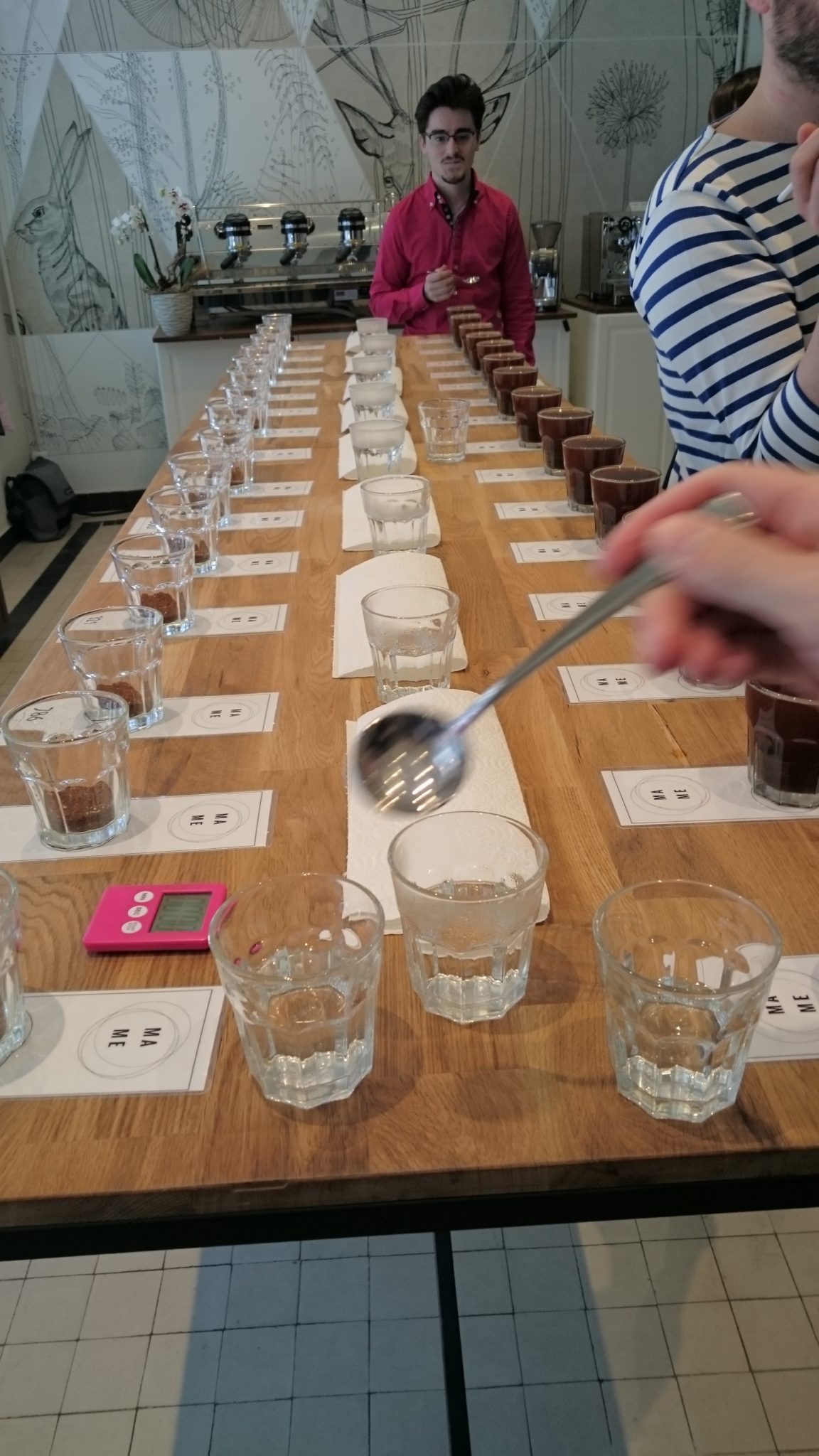 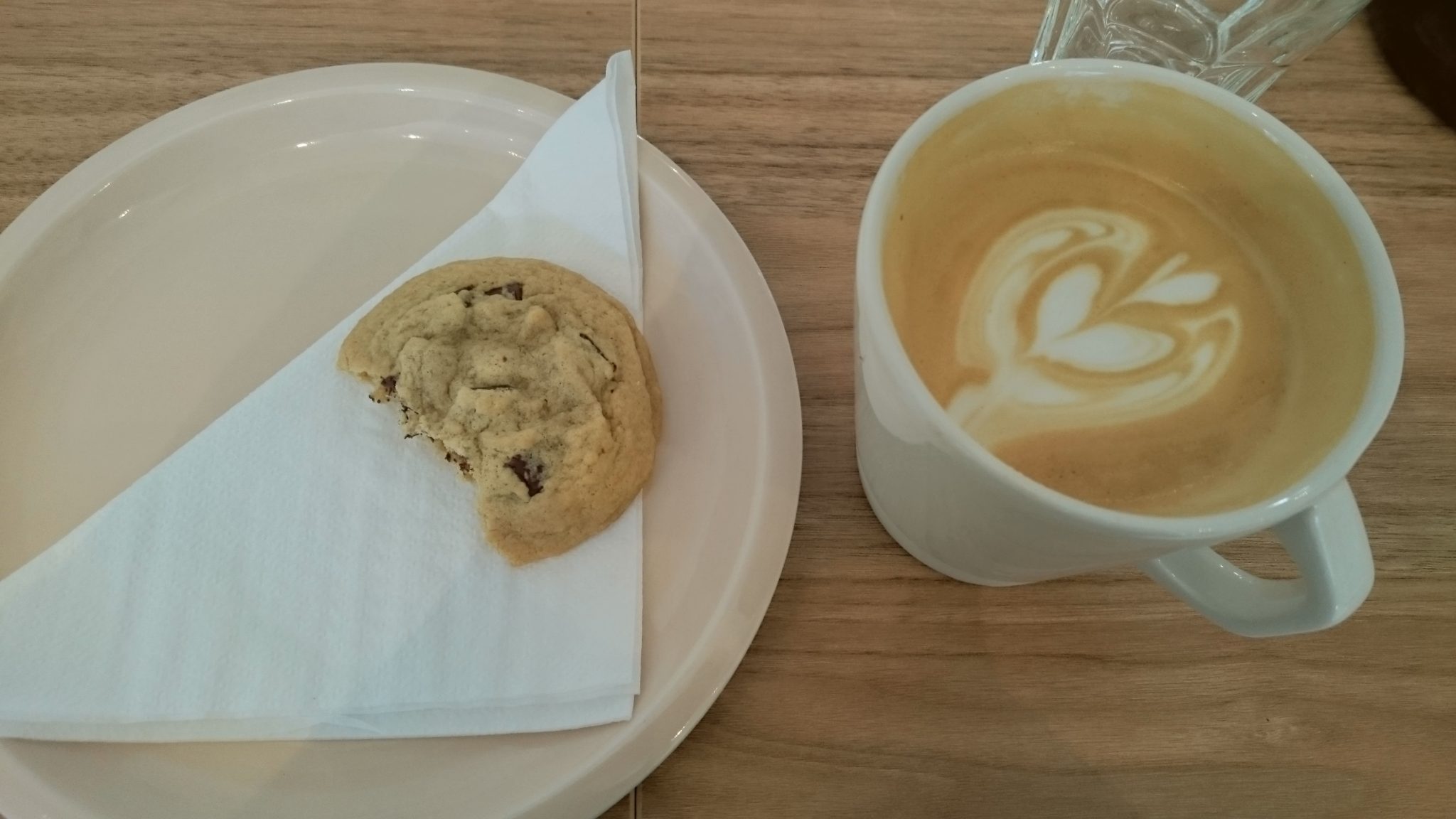 After the session, I enjoyed the Intelligentsia Anjilanaka as a latte along with a chocolate chip cookie.